Thai delegation of 80 arrives in SL 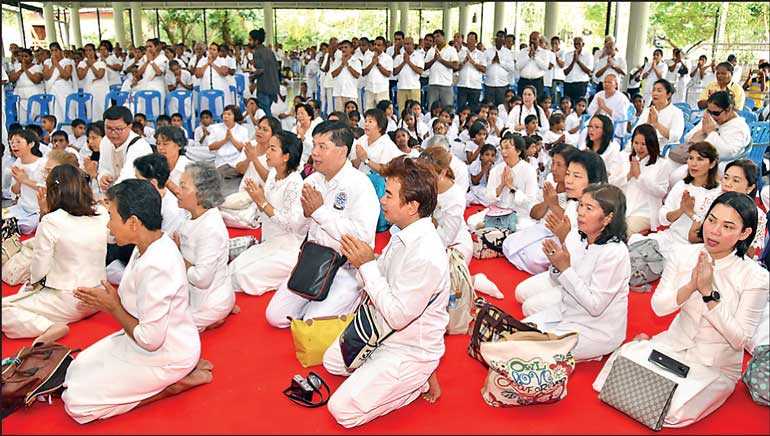 A month after the Easter Sunday attacks, 80 Thai tourists on pilgrimage, including the Maheyong Monastery Chief Prelate Ven. Phra Bhawana-Khemakun, arrived in Sri Lanka yesterday to participate in a cultural tour around the country.

The Thai tourists will be on tour for six days, visiting cultural sites in Colombo, Hambantota, Nuwara Eliya, Kandy and Habarana. The delegation also took part in a donation ceremony of Buddha statues, organised by Ven. Rassagala Seewali Thero of Thai Vihara at Mabima in Kelaniya.

SLTDA Chairman Kishu Gomes told Daily FT, “Buddhist tourism is important for the country and that’s a segment that is growing, because the Buddhism in Sri Lanka is perceived to be pure and authentic. That has significant demand not only in Thailand, but also in other countries like Myanmar, which we have discovered over the past years. We see the number of Buddhist tourists increasing, although unfortunately the distractions caused by the Easter Sunday attacks have been a drawback.”

He said that the arrival of the delegation will provide impetus to the tourism industry. Gomes added that this event will boost the tourism industry, by delivering the message that the country is safe for tourists. This cultural tour is significant in rebuilding the economy of Sri Lanka, in particular religious tourism, he noted.

“We have had similar delegations arrive in Sri Lanka before, but we are happy that this group of tourists arrived in the country despite travel advisories and other security-related concerns that have been set against the island. Their willingness and decision to come over will be an inspiration for the whole country, and we expect more delegations will come in the future,” Gomes added.