A group of professionals backing a movement called ‘Sajith for a new Sri Lanka’ yesterday called for a revival of the United National Party (UNP) leadership with UNP Deputy Leader Sajith Premadasa to restore internal democracy within the party and lead it to victory.

The group consisting of university lecturers, lawyers, artists and athletes gathered to highlight the importance of having a capable leader to address issues at all levels of the country including the economy. 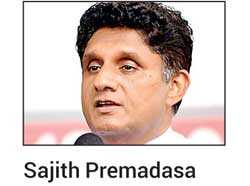 Speaking to media at the Renuka Hotel in Colombo, Dr. Mahim Mendis representing the movement said the UNP should listen to public and party members’ opinions to restore internal democracy within the party that will enable the UNP to “regain glory days of late President Premadasa.”

Dr. Mendis pointed out the leadership of the UNP had not changed since the assassination of President Premadasa in 1993, therefore a change of a party leader was essential to give a new face to the UNP and a hope for its members.

“From 1993 to 2019 the leadership of the UNP has not changed. Therefore it is in the interest of a democratic party that their party’s leadership be constantly revisited, especially when an election is lost the leadership of that particular political party should not remain intact. Therefore that leader should either retire or step aside.”

According to Dr. Mendis, new leadership is essential when a political party has lost an election to give a fresh start to the party but that option has not been practised by the UNP.

He noted UNP Deputy Leader Sajith Premadasa had shown his ability to lead the UNP and the country as a politician. According to Dr. Mendis, the UNP Deputy Leader has not been accused of corruption, which he argued is the best quality that a leader can have.