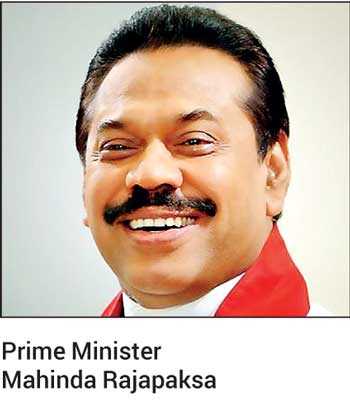 Prime Minister Mahinda Rajapaksa yesterday stated that Sri Lanka has a responsibility to tackle the fallout from the Easter Sunday attacks responsibly or risk it affecting the stability of the South Asian region. Addressing the graduation ceremony of the Defence Services Command and Staff College (DSCSC) yesterday as Chief Guest, the Prime Minister highlighted the need for an intelligence-led counter terrorism campaign to face the new threat to ensure State and regional security.

“This new terrorist threat will have to be contained by whatever means necessary. If we don’t get on top of the situation, all the neighbouring countries including India, the Maldives, Bangladesh, and even countries further off like Myanmar, Thailand and Malaysia will be under threat," he said recalling that that the Easter Sunday bombings were the deadliest terrorist attack on a civilian target to take place anywhere in Asia. "Even though this is a small country, the challenges that we have had to face are not small at all," he added.

Rajapaksa described how his Government of 2005 mounted a successful counter-terrorism campaign, with President Gotabaya Rajapaksa as the then-Secretary to the Ministry of Defence. "With just days to go to the tenth anniversary of the victory against the LTTE, we had the Easter Sunday suicide bombings carried out by an extremist Islamic organisation," he stated.

However, he pointed out that the counter-terrorism tactics will have to evolve from those used in the LTTE wars. "Unlike the war against the LTTE which required ground, sea and air operations, this new threat at this stage requires mainly intelligence operations," he opined.

The Prime Minister highlighted that overcoming the current and emerging threats will require a synergy of diplomacy, international security co-operation and intelligence. "The new situation that we are faced with requires intelligence operations, co-operation with international intelligence agencies and certain strategic foreign policy initiatives,” he said, pledging to give the armed forces the required political leadership to ensure national security.

He criticised the previous Government for neglecting national security and for creating policies that went against national interest. "The change of Government of January 2015 was almost as if a hostile foreign force had invaded and taken over Sri Lanka," he charged, "Unfortunately, over the past five years, the intelligence services were rendered completely inoperative. Members of the intelligence services were persecuted, harassed, and jailed by the previous Government on false charges." he added.

Rajapaksa alleged that the previous Government with the help of some in the international community acted to undermine the credibility of the Sri Lankan armed forces. "The idea was to create the impression in the minds of Sri Lankans and the international community that our armed forces were not war heroes but thieves and murderers. No government of any country in the world has humiliated its own armed forces in this manner," he claimed. He also pointed out that no sovereign country would allow a foreign power to object to promotions within their military.

Criticising the UNP-led Government of Jan 2015 for co-sponsoring a resolution against Sri Lanka at the United Nations Human Rights Commission, the Prime Minister reassured the armed forces that his Government will correct the dishonour and wrongs they faced during the last four years.

"I take this opportunity to pledge before the armed forces of Sri Lanka that the humiliation and injustices that they were subject to over the past five years will be rectified and restitution provided where necessary. Initiatives will be taken at the international level to restore to our armed forces, the respect and dignity they deserve," he stressed.

Congratulating the officers who graduated from the DSCSC, Rajapaksa wished local and foreign participants the best. "You must all bear in mind your responsibilities as members of an illustrious military organisation that did what was thought impossible and amazed the entire world," he said to the Sri Lankan graduate officers.