SL, China to draw up ‘new blueprint’ for future cooperation 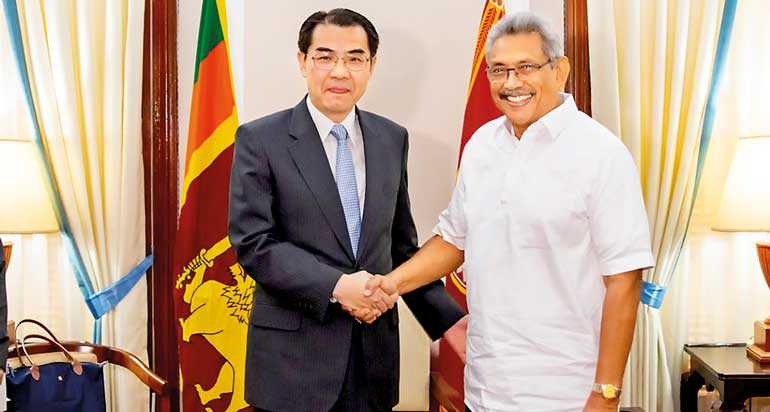 China and Sri Lanka yesterday agreed to speed up the implementation of large-scale projects and draw up a “new blueprint” for future cooperation following high-level meetings between President Gotabaya Rajapaksa and Chinese special envoy Wu Jianghao.

The large-scale projects will also focus on the Colombo Port City project and the Hambantota Port venture.

Following the meeting with President Rajapaksa, the Chinese embassy in a statement said that both parties agreed to further strengthen the “robust political trust between” both countries.

Sri Lanka and China agreed to enhance their practical cooperation and “speed up the implementation of the big economic projects, including the Colombo Port City and the Hambantota Port according to existing consensus and, on that basis, draw up the new blueprint for future cooperation” the communique said.

Hot on the heels of President Rajapaksa’s win, China had extended an invitation to visit Beijing. Chinese Ambassador Cheng Xueyuan extended the invitation for him to visit China at “a mutually convenient and mature time” a spokesman for the embassy said.

The visit comes days after President Rajapaksa told an Indian journalist in an interview that he would renegotiate the Hambantota Port lease agreement, terming it a “mistake” and calling on the Chinese company to be open to the move.

In the interview, President Rajapaksa claimed that even though China was a good friend, he was not afraid to say the joint venture inked by the former Government was a mistake, pointing out that public sentiment was against the deal. President Rajapaksa opined that handing over control of a valuable asset of economic importance such as a port should not be done.