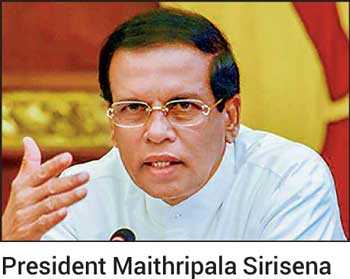 In a rushed special Cabinet meeting lasting over an hour yesterday, President Maithripala Sirisena strongly opposed the Parliament Select Committee on the Easter Sunday attacks continuing its hearings, calling it a political witch hunt against him.

An angry Sirisena accused some of the members of the PSC, Parliamentarians Dr. Jayampathy Wickramaratne, Field Marshal Sarath Fonseka, Prof. Ashu Marasinghe, and M. A. Sumanthiran, of having political motives to destroy his image, sources privy to the meeting told Daily FT.

Sirisena summoned the sudden special Cabinet meeting on the heels of former Inspector General of Police (IGP) Pujitha Jayasundara and former Defence Secretary Hemasiri Fernando presenting explosive evidence before the Committee during hearings on Thursday. The IGP, who was sent on compulsory leave by the President over the Easter Sunday attacks, claimed that Sirisena asked him to resign, promising to give him a diplomatic posting, while Fernando told the Committee that he was not given an opportunity to brief the President as Secretary of the Defence Ministry.

The President asked the Cabinet to immediately suspend hearings, threatening to abstain from all Government activities, including holding Cabinet meetings if the hearings were not suspended, a source said.

Sirisena has also noted that there was no need for a Parliamentary Select Committee, when there have been five petitions filed in the Supreme Court regarding the issue, including cases against him and the Prime Minister. He also pointed out that another Presidential Select Committee was already investigating the attacks.

However, the Ministers present at the meeting opposed the President’s request, and said that the decision on whether or not to continue the hearings of the PSC will have to be taken by Parliament, noting that the Cabinet has no power to do so.

“The President was however adamant that the hearings should stop. He claimed that it was unnecessary exposure of serving intelligence officers to be giving evidence in front of media,” one source who was present at the meeting told Daily FT.

Sirisena had also said that he was ready to answer questions of not just the PSC, but all 225 Parliamentarians, but sans media presence, the source claimed.