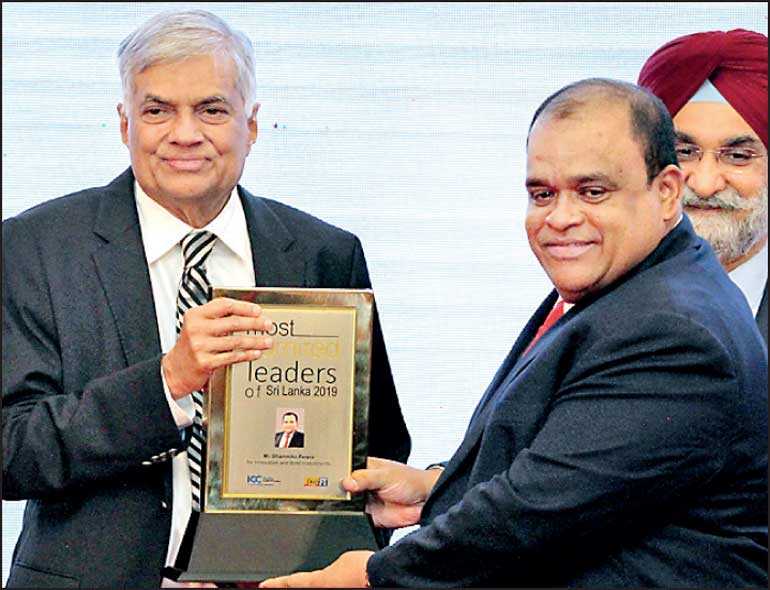 The special awards (except that of Malcolm Cardinal Ranjith) were presented at the ICCSL, CIMA and Daily FT Most Admired Companies Awards ceremony held at the BMICH.

Albert Malcolm Ranjith Patabendige Don, often known simply as Malcolm Ranjith or Albert Malcolm Ranjith, is the Cardinal of the Catholic Church in Sri Lanka. He is the ninth and current Archbishop of Colombo, serving since 2009. He was elevated to the cardinalate in 2010. The Cardinal has repeatedly emphasised the importance of all Sri Lankans joining together irrespective of their differences, to provide peace and harmony. After the Easter Sunday terrorist attacks the Cardinal said very strongly, “We all should get together to ensure that these incidents do not in any way damage the harmony and peace that exist between us Christians, Buddhists, Hindus and Muslims.”

Statements by Malcolm Cardinal Ranjith contributed directly to unifying all religions, including even non-believers. He also courageously confronted extremist elements. The Cardinal always emphasises God’s mercy, concern for the poor and commitment to inter-faith dialogue.

Based on his firm ideology and moral principles, the conduct of Cardinal Ranjith after the Easter Sunday tragedy and its aftermath made a major contribution towards avoiding further violence in the country. While wishing to condemn this act in the strongest possible terms, he asked all Sri Lankans not to take the law into their hands but help maintain peace and harmony in this country.

He has done his duty by the country and that does not require any third-party proof as his record is public and speaks for itself. People know his invaluable service both as a philanthropist and socially conscious national leader.

However, history will remember him not for his awards but his role in shaping the history of the country, with him playing a crucial and statesman’s role which redefined the course of history during the constitutional crisis of October 2018. His firm intervention prevented a disaster that could have had long-term repercussions on the democracy of the country. During the period of near anarchy that ensued, most functions of the Government stood still but Jayasuriya stood by parliamentary traditions and democracy. Jayasuriya’s daring and fearless stand during the chaos and uncertainty that followed the constitutional crisis, in spite of personal insults, vilifications and threats of bodily harm, defined not only the final outcome of the incident but also the leader he is.

Jayawardene started his career in the tea business, working for the government organisation involved in the purchase and export of tea. Over the years he has demonstrated that he is not afraid to take risks when buying a business. He is not afraid to put his money down whether it be with Government-owned farms both in Ambewela and Pattipola, a Government-owned milk powder company or the monolithic Insurance Corporation of Sri Lanka.  He took all of them in his stride and made them buzz.

The secret of his success is that he knew what was going on in all of businesses. He did not delegate in the way experts say you should. Today he is one of the foremost businessmen in Sri Lanka, with hardly any failure in his career. Certainly, in that respect he is unmatched. Jayawardena was bestowed with the Knight Cross of Dannebrog, the Danish version of the British Knighthood, by the Queen of Denmark, Margrethe II. Jayawardena is currently the Consul General of Denmark in Colombo.

His beginnings were humble and different to many other business leaders. He started life as an apprentice and rose to be the major shareholder of some of the largest conglomerates in the country. What does he owe his success to? The fact that he has studied every subject in which he has been involved. He has information at his fingertips and is able to argue with top economists and statisticians, taking them on, on their own terms.

He is quick to identify an opportunity regardless of the economic environment. His strength is numbers, where any company that fits his business model will soon be shepherded to success.

Many of his acquisitions have been successes and his reach has spread across many sectors. He has a wealth of knowledge on many subjects and the very fact that he has turned around so many businesses which he has put his hand into – those businesses are individually at the top rung of their category - is a great tribute to this man.

Perera was a former Chairman of the Board of Investment of Sri Lanka, Chairman of The Queensbury Leisure Ltd, Chairman for Hayleys Agriculture Holdings Ltd, Non-Executive Chairman of Sampath Bank Plc and a Former Secretary of the Ministry of Transport and Highways.

Having studied at Taxila Central College, Horana, Perera enrolled in the National Diploma in Technology (NDT) program at the Institute of Technology, University of Moratuwa before dropping out later to pursue his business interests. He is undeniably the epitome of a self-made man.

The Founder of Janashakthi Insurance, Chandra Schaffter, is fondly referred to as the ‘Father of Insurance in Sri Lanka’ due to his immense contribution to the local Insurance industry. He started his career as a clerk at Ceylon Insurance Ltd. in 1952 and later qualified as an Associate Member of the Chartered Insurance Institute.

In 1979, he was the only individual who was appointed as a Principal Agent of the National Insurance Corporation. At the age of 64, he established the company that is today known as Janashakthi Insurance Plc.

His unparalleled contribution to the insurance industry is also seen through his service at many industry forums. He has served as President of the Insurance Association of Sri Lanka and as the representative for Insurance at the Ceylon Chamber of Commerce. He was feted with the prestigious Lifetime Achievement Award in 2012 at the 16th Asia Industry Awards. In 2015, he was also awarded LMD’s Lifetime Achievement Award.