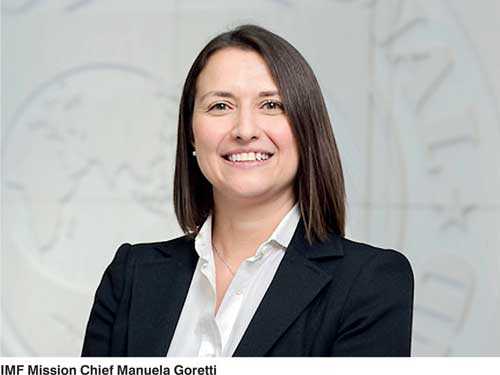 Q: The IMF has advocated for robust fiscal rule but there are indications that Government spending will increase in the run up to elections next year. Are you concerned of fiscal slippage? Has that been raised during discussions with Government officials? How would you like to see political challenges managed moving forward?

A: Sri Lanka has made considerable progress on fiscal consolidation through prudent expenditure management and revenue mobilisation, reaching a primary surplus in 2017. But given still high public debt and large financing needs, it is critical that the authorities’ fiscal efforts continue to strengthen Sri Lanka’s resilience to external shocks and domestic uncertainty in the run-up to the elections. These efforts can be supported by strong policy frameworks and institutions. We welcome the authorities’ commitment to upgrade the country’s fiscal rules to lock in the hard-won gains in fiscal consolidation and place public debt firmly on a downward path.

Q: The Inland Revenue Act was seen as a major win under the IMF programme but there are signs that the Government will introduce changes, particularly for the public sector that could reduce public revenue. How concerned are you that this would impact reform?

A: The fiscal resources expected to be raised thanks to the new Inland Revenue Act can make space for essential social services and growth-enhancing capital spending such as infrastructure investment, while sustaining fiscal consolidation. Also, the new Inland Revenue Act simplifies the tax system and is expected to improve the investment climate substantially through transparent, rule-oriented, and investment-based incentives, while developing a predictable level playing field for investors, in line with international best practice. Reverting to the previous income tax regime with extensive tax exemptions would jeopardise these objectives.

Q: The IMF has supported efforts to reduce losses of SOEs but with limited effect. Improvement of SriLankan Airlines, in particular, has been placed as a structural goal, but how pragmatic do you feel these targets are? How imperative is SOE reform for Sri Lanka?

A: The authorities are taking important steps to tackle the substantial fiscal risks posed by SOEs. The approval of an automatic fuel pricing formula and the introduction of Statements of Corporate Intent (SCIs) for 5 major SOEs with biannual compliance reports are landmark initiatives to strengthen governance and transparency while mitigating fiscal risks. Nevertheless, delays remain in the publication of SOE audited financial statements, which are critical to assess contingent fiscal liabilities. Going forward, we welcome the authorities’ commitment to restructure Sri Lankan Airlines, with support from an expert consulting firm, to place the airline on a sound financial and operational footing, and to complete energy-pricing reforms. These measures will be critical to limit future recourse by SOEs to quasi-fiscal operations, which have historically been absorbed by the government in difficult times, diverting resources from essential social spending and growth-enhancing infrastructure.

Q: Do you expect energy price reform to be implemented by September? Have there been discussions on CEB reforms or a possible pricing formula?

A: In Sri Lanka, fuel prices and retail electricity tariffs have been set administratively and left unchanged over the last few years. This practice has resulted in energy subsidies, which have benefitted disproportionally the rich, and generated financial losses for CPC or CEB and in turn sizeable contingent liabilities for the central government. The welcome introduction of an automatic pricing mechanism for fuel in May will ensure that gasoline and diesel prices will be regularly adjusted in line with market prices going forward. On electricity, under the program, cabinet approval of an automatic electricity pricing formula is envisaged by September 2018. To compensate the poor for higher energy prices, the government efforts to strengthen social safety nets are critical, starting with the establishment of a social registry and means-testing criteria, with support from the World Bank.

A: Sri Lanka’s overall credit growth has decelerated gradually since mid-2016, thanks to prudent monetary policy by the CBSL. While this is a positive development, credit growth in the construction sector remains elevated. The authorities have already taken several steps to enhance monitoring of the real estate sector and new macro-prudential tools could be considered to prevent build-up of systemic risks in the financial sector.

Q: The Central Bank has indicated that it has ended the tightening cycle but do does the IMF believe it should stand ready to tighten further?

Q: The Central Bank’s flexible inflation targeting regime has received much attention including criticism that it is pushing up inflation. What is your view?

A: Like many modern central banks, the CBSL is transitioning to an inflation targeting framework. With a legal mandate to maintain price stability as its primary objective, inflation targeting aims at stabilising inflation at levels compatible with sustainable long-term growth and economic stability, supported by a fully flexible exchange rate. The CBSL has navigated the transition well so far, managing monetary policy prudently and effectively since the beginning of the program in the face of price shocks and market volatility. Planned changes to the Central Bank law will be a key milestone to further strengthen the CBSL’s mandate, governance, transparency, and autonomy.

Q: Given that Sri Lanka’s economy depends significantly on imports, especially food imports, a depreciating rupee can have serious impact on the poor. The government has said it is strengthening social safety nets but these can be easily politicised or used to unethically gather public data. How do you feel this issue should be tackled?

A: Well-targeted social safety nets are essential for making economic growth inclusive and mitigating the impact of adverse shocks, including natural disasters, on the poorest of the population. Sri Lanka’s social safety nets, including the Samurdhi program, are poorly targeted and do not reach all households that need them. It is critical to accelerate ongoing reforms by the authorities, with support from the World Bank, that aim to develop a centralised registry of social safety net beneficiaries and means-testing criteria for all targeted social assistance programs. This will allow to target benefits more effectively and expand coverage to those who are eligible but currently left out.

Q: The Government has proposed new laws to strengthen the Central Bank as well as the entire financial sector. How crucial do you think these measures are?

A: As Sri Lanka emerges as a modern economy, its legal framework also needs to be updated and amended to respond to new and evolving tasks. The Central Bank law is one example where comprehensive amendments are important to strengthen the CBSL’s mandate, autonomy, accountability, and transparency toward inflation targeting. Together with strengthened financial legislations that will improve the financial regulatory framework, in line with international standards, Sri Lanka will be able to reduce volatility and uncertainty in financial markets.

A: Taking advantage of favourable market conditions in 2017, the CBSL stepped up its pace of reserve accumulation. Given Sri Lanka’s still sizeable fiscal vulnerabilities and large debt redemptions coming due, efforts to build up international reserves in line with standard metrics and peer emerging markets should continue. The best way to do so is for the CBSL to directly purchase foreign exchange from the market. This can still be consistent with a market-based exchange rate, as the market would determine the exchange rate level that meets FX demand and supply from market participants as well as the CBSL’s foreign exchange purchases. The CBSL should continue to rely on exchange rate flexibility as the first line of defence against volatile global capital flows to mitigate losses in reserves. It is critical though that the CBSL efforts continue to be supported by sustained fiscal consolidation and structural reform efforts by the government to bolster investors’ confidence and strengthen the economy’s resilience to rising global market volatility.

Q: How sound is Sri Lanka’s debt management? What challenges do you foresee?

A: Important steps have been taken to manage large external repayments in coming years. In particular, the Cabinet approved a strategy to cope with maturing international sovereign bonds, and the Liability Management Act was enacted. To further strengthen debt management, the government and the CBSL are preparing a Medium-Term Debt Management Strategy in line with global best practice. This is expected to support investors’ confidence and reduce issuance costs over time.

Q: The IMF has warned an escalating trade war between US and China could hit global growth. How would this impact a small developing nation like Sri Lanka. What could be done to mitigate this impact?

A: Global trade integration contributes to higher productivity, lower prices, and improved living standards. Escalating trade tensions among major world economies could curtail international trade and reduce global growth. While Sri Lanka would ultimately be affected, the country can proactively step up growth-enhancing structural reforms to mitigate the impact. In particular, gradually liberalising Sri Lanka’s own highly-protectionist trade regime through fiscally-neutral reforms of tariffs and para-tariffs and simplification of export and import processes will help boost trade and investment. Robust implementation of the new Inland Revenue Act and the one-stop shop for FDI are also expected to help support the investment climate.

Q: What do you think should be the top three priorities for the Government this year?