The Government will sign a $ 160 million loan agreement with the Asian Development Bank (ADB) today to improve efficiency of the local railway by modernising its operations as well as upgrading its infrastructure and technical capacity in the first such funding received for the sector by the ADB. 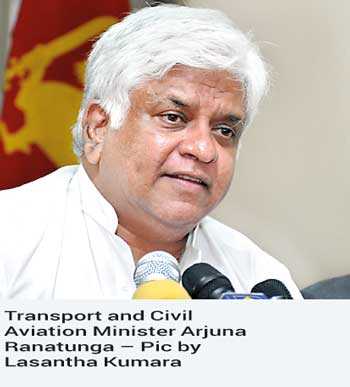 Transport and Civil Aviation Minister Arjuna Ranatunga speaking to media at Temple Trees said improving railway efficiency could attract more commuters. It was revealed that in 2017 the railway carried 136.7 million passengers and two million tonnes of goods by operating an average of 351 passenger trains and 19 freight trains daily.

The total cost of the project is $ 192 million, with the Government of Sri Lanka providing $ 32 million. The expected project completion date is the end of 2024.

The main outputs financed by the project include procuring an island-wide, long-term evolution (LTE/4G) equipment to replace the telecommunications system installed in 1985, installing a modern multi-channel (paper, mobile, and smart card) system to replace the cumbersome ticketing system, which requires tickets to be printed on custom-made paper for over 60,000 ticket combinations and constructing a modern operations headquarters and train control centre to replace the current headquarters that cannot accommodate all operation departments of SLR, and the outdated control centre opened in 1962 to monitor railway operations in the Western Province.

In addition it will also strengthen maintenance capacity, a brake testing and repair facility and a carriage repair workshop will be established at the main maintenance workshop of SLR at Ratmalana.

The financing will also focus on railway safety by supporting civil works for the construction of housing blocks to enable the future resettlement of encroachers on the right-of- way of the Kelani Valley (KV) line, upgrade the old railway underpass in Maradana, upgrade traffic and pedestrian safety support improvements of passenger safety and information system at Colombo Fort and Maradana stations.

The Sri Lanka German Technical Training Centre (SLGRTTC) will be upgraded with a new training wing, a train simulator and equipment packages to support the modernisation of four curricula and the development of over six new curricula.

Under the loan scheme the KV line extending from Maradana to Avissawella (60 km in length and a daily passenger volume of 14,600) will be improved. At present the average speed of train operated on the KV line is approximately 26 km/h. At times there are long delays due to failures in the signal system, frequent failure of telecommunication systems and poor condition of the track.

The Kelani Valley Railway Improvement Program will finance the rehabilitation, capacity upgrade, modernisation, and electrification of the KV line between Maradana and Padukka station and includes an elevated section of 20 km from Maradana to Malapalla, and 16 km at-grade from Malapalla to Padukka, excluding Meegoda, Watareka and Padukka station areas.

UNP in no hurry to appoint Presidential candidate: Arjuna