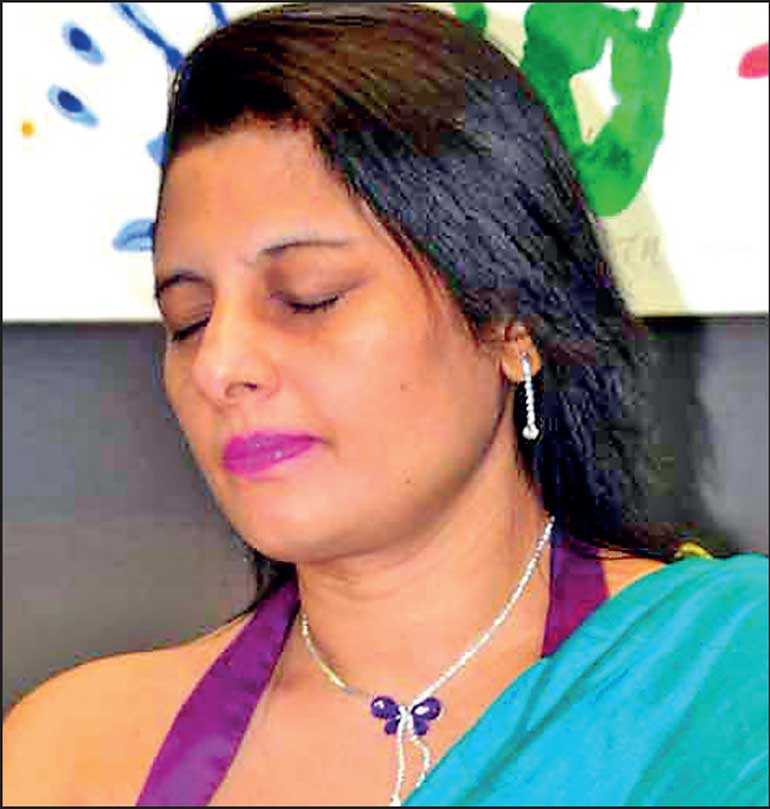 Once discarded Nayana Ashchariya Peiris Jayakody, after losing her sight in a claymore bomb attack, had been in isolation for over 10 years without assistance from her family and friends. She was a product of Devi Balika Vidyalaya, a diploma holder in English from the Warwick University, and an employee in an international bank.

On 10 March 2000, this fatal day Ashchariya was driving home when tragedy struck. She had gained consciousness only after three days in the ICU. In addition to losing her sight her left leg has sustained a compound fracture after which she had been confined to a wheel chair.

The orthopaedic surgeon who attended to her leg had opted not to amputate her leg as she was very young. She had been told that on her car there had been 284 holes where the metal balls had struck. She had added that if they struck her, she would have been broken into 284 pieces and a deity had given another lease of life.

Her father, a son of a mayor, had been an aeronautical engineer attached to Saudi Air for 20 years, had been fabulously rich had owned a mansion. He had stacked chocolates, cheese and other expensive food stuffs all shipped, but all Ashchariya needed was affection. She until 11 had slept with her parents.

Ashchariya had been very talented in painting, Kandyan dancing and as a pianist. Her ambition had been to be a reputed artiste as she was competent in many such fields in the arts stream. But her parents and relations had insisted she should follow the science stream to become a doctor as money was their priority. After 11 years she was blessed with a brother who had unfortunately born with fatal meningitis, for which her father had spent all his money, even selling his properties.

Ashchariya had travelled twice to both India and Singapore to find a cure although the specialists in Sri Lanka had been not in favour of it. When Ashchariya passes through security checks the alarms ring as still there are metal balls embedded in her head and body. Ashchariya cannot even to date feel any smell as her nostril nerve connecting to vision too had got damaged, resulting in anosmia (loss of sense of smell).

She relates that all her sympathisers steadily had diminished eventually she had been made to remain isolated. All had thought she would die. To add salt to the wound her parents who were well-to-do formerly had also abandoned her and had not even contacted over the phone. Hence she has had to navigate through life’s rocky roads.

It is learnt that her parents and relatives had discriminated her for choosing the Arts stream for Advanced Level against their wishes. Hence Ashchariya had to find a way to live on her own by renting out premises, the main constraint was she had no job and income. Luckily for her she had saved some money during her short tenure at the international bank and from the proceeds of an insurance policy.

She had been adamant in paying rent and bills as she had to convince landlords. To Ashchariya spending money on food was not a priority as she preferred to remain starved surviving with only water. She had been to herself under closed doors, very concerned to be in the good books of the landlords. Living sans much intake of food had made her become very thin; as she lamented, she was like a skeleton, was like a “katussi” then. During this period some friends had collected money and bought her a cheap television which had helped her to while away the time. She says after getting up it was a routine for her to switch on the television to hear.

With the help of unknown persons, she had traversed through this long period of about 12 years living all by herself. A girl in the vicinity had sympathised with her and had given her lunch parcel prepared by her mother to Ashchariya. A three-wheeler driver had volunteered to help her when she needed to go out. In this context Ashchariya had to find a way to see her way out of darkness. When she started to cook to see if the gas cooker was working, she used to hold her fingers to the flame which had made her fingers look tanned.

She had an innate talent for designing clothes. In fact while at Devi Balika a colleague who also had talent had designed their own clothes as a pastime but never had practiced beyond. At that time, she had not known how competent and powerful she was in that expertise as a fashion designer. She believes God had given the opportunity to enhance this proficiency which she was unaware of to make full use of it.

She had developed her innate designing aptitude by making her brain stronger. Of course, when she could not see she remembers well all colours and how to mix them appropriately. As any designer she had been able to grasp to visualise differently. She confesses that she cannot copy designs of others as she cannot see. She had been inspired by nature and by god. She had recollected everything she had observed in fashion designing before.

She from memory imagines colours from earth, sky and from everything God has created. Ashchariya confesses that those with eyesight make use of or in fact depend on technology for everything. Now there is equipment for drawing sketches and various other tech-based applications too. But people don’t make use of their brain power when they are dependent on technology. As a result, the brain capacity gets erased. If there’s a power failure people won’t be able to do anything.

In her case she depends on my brain capacity for everything which she had developed over a decade. She does all her calculations, drawings and other exercises using her brain while others do them on their computers. To date from school days Ashchariya has designed all her clothes. Even today she matches the colour of her clothes with the shoes she wears, ear studs, etc.

She adds that challenges were immense. None of her relations or friends were there to support her when she needed their support the most. But today after winning the award for the most dedicated ‘Fashion Designer’ in year 2017 among 300 contestants, all with degrees/diplomas in fashion designing, with her rise to fame, she has received telephone calls asking if she remembers them to which she wonders what shameless people they are. Hence for her to cope with such people was one of the challenges.

She says she was blind, but they weren’t. They would have seen her when walking on the road while being assisted by an unknown three-wheel driver. Where were they then? She didn’t have a house to stay in, nor did she have a job and those who supported her were people she never knew. Hence, it was a challenge to stand up on her own from zero.

To date, she has never received a call from my mother to see whether she is dead or alive. Ashchariya has challenged herself to love this world back instead of hating it. She has now decided to help people who have fallen in their lives. Now she has her own shop with brand name ‘Christiana Glory’. She says many people have jealous mindsets. They are resentful of those who succeed.

A few years ago she had met her bighearted husband Chandana Sesath Jayakody when she had gone to a Government institution to resolve some matter. That day she had taken a three-wheeler saying she would pay the hire later. Ashchariya says her husband does not like her talking good of him, yet praises him as a large-hearted wonderful human being.

Ashchariya possesses a high sense of humour and is now a mother of a small daughter and a good housewife who does all household work. She says she could sweep the house even better that those with sight, cut and chop vegetables faster; an iron woman indeed. The three are very happy, she had said quoting that the small daughter calls them by names of cartoon characters.

Ashchariya, the only Sri Lankan listed among BBC channel’s 100 Most Inspiring Women for 2019, is now a reputed fashion designer, artist, personality development, corporate and leadership trainer. In year 2017 she was one among the ‘10 Most Remarkable Women in Sri Lanka,’ which for her is a privilege and a humble honour. We all wish her more successes in her endeavours.

The writer is based in Brisbane.