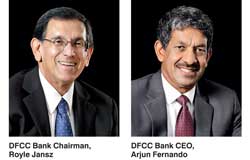 The DFCC Group yesterday reported an excellent half year performance for 2017, with DFCC Bank leading the charge on the back of its strategic growth drive as a rapidly emerging full service commercial bank.

DFCC Bank completed yet another successful first half year by reporting profit before tax of Rs.3,446 million a 74% growth and profit after tax of Rs.2,815 million a 76% growth over the period ended 30 June 2016 despite increased taxes and narrowing margins due to fluctuating interest rates which prevailed during the period.

The Chief Executive Officer of DFCC Bank, Arjun Fernando noted that this strong bottom line growth was achieved despite a challenging operating milieu. “The external environment was fairly challenging due to rising taxes and pressure on margins in the face of interest rate volatility experienced during the year. However, our sustained momentum in Q2 2017 confirms that our growth strategy is on track. We took the challenging market conditions into consideration in planning our strategy and we have deployed an array of financially prudent measures, customised financial solutions, digitalisation initiatives, branch expansion and other deposit mobilisation schemes along with staff engagement programs to fuel our progress.”

“DFCC Bank is always striving to ensure that our customers get the very best in service by working together as a team to listen and respond to their changing needs. Our people continue to be our biggest strength, and the Bank has embarked on many customer engagement initiatives. We will continue to deliver services in the most cost effective and efficient way to provide the best possible value for our customers” he further stated.

The Bank also increased its focus on digital transformation technology to accelerate shift away from traditional banking during the year. The Bank’s revolutionary Vardhana Virtual Wallet gained further momentum attracting a large number of users including DFCC customers, non-customers and merchants whilst also achieving a high transactional value. The Wallet is revolutionising payments and offering unparalleled convenience to customers due to its easy to use functionalities. The merchant base has rapidly expanded into large scale supermarkets, fast food chains, retail clothing chains, online stores, salons, cinemas and other merchant categories will be introduced in the near future.

This expansion has significantly extended DFCC Bank’s market coverage and ability to reach a larger and more diverse customer base.  The fruition of this expansion initiative is already being reflected in the rise in deposits and lending. It is also noteworthy that despite the increase of 28% in operating cost due to ongoing expansion activities that include new branches, business promotions and IT related expenses, DFCC Bank has continued to maintain one of the lowest cost to income ratios in the industry at 47.1%, (post exceptional gain adjustment).

The Bank’s Loans portfolio grew by Rs.31,694 million to Rs.198,438 million compared to Rs.166,744 million as at 30 June 2017, reflecting a growth of 19% year on year. The year to date growth in loan portfolio was Rs.12,652 million (7%). The Bank’s deposit base increased to Rs.168,357 up 40% from Rs.120,089 million in June 2016. The growth in customer deposits during the first half year 2017 was Rs.27,843 million (20%) which was well above the growth in loan portfolio during the same period. The Bank’s CASA ratio, which represents low cost deposits over the total deposits of the Bank, has declined to 15.9% from 20.2% in December 2016. This was mainly due to the increase in fixed deposits by Rs.29,806 million during the period which was used to fund the lending growth of the Bank. The DFCC bank continues to enjoy medium to long term low cost borrowing lines that helped to reduce the funding cost. When these term borrowings are added to deposits, the ratio improves to 26.1% as at 30th June 2017.

The Bank has also retained a strong focus on lending quality.  However, despite the  increase seen in the Non-Performing Advances (NPA) ratio as at 30th June 2017 of 3.02% when compared to 2.97% in December 2016, this is an improvement from the March 2017 NPA ratio of 3.34%. The Bank has streamlined its recovery process and strengthened loan appraisals to help contain the accumulation of NPAs.

The Banking landscape is fast changing bringing about many challenges as well as opportunities. DFCC Bank’s philosophy is to provide the best service through a number of delivery channels making the products and services accessible to customers wherever they are. In line with this, DFCC Bank plans to invest significantly to increase the Bank’s digital footprint.