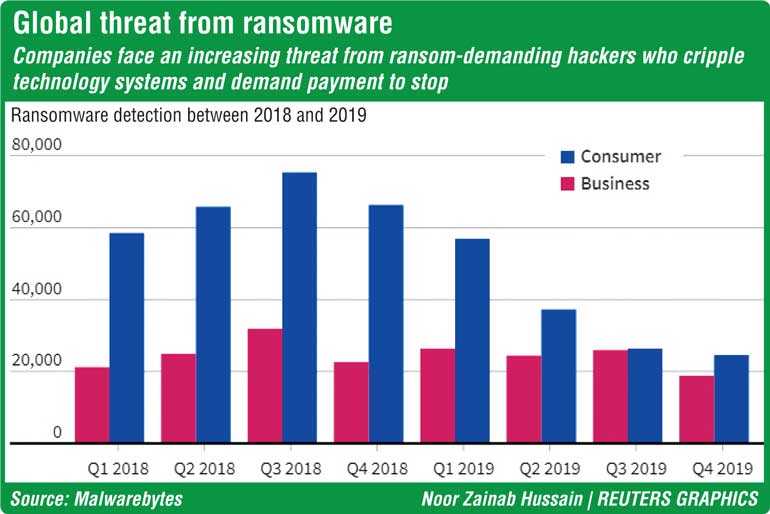 Reuters: US insurers are ramping up cyber-insurance rates by as much as 25% and trying to curb exposure to vulnerable customers after a surge of costly claims, industry sources said.

The changes follow a challenging year of hackers using malicious programs, known as ransomware, to take down systems that control everything from hospital billing to manufacturing. They stop only after receiving increasingly hefty payments.

“Ransomware is more sophisticated and dangerous than we saw in the past,” said Adam Kujawa, director of Malwarebytes Labs.

There were 6% fewer ransomware incidents in 2019 versus the prior year, according to Malwarebytes. However, attacks are now designed to spur deeper and more lasting technological problems, with hackers demanding bigger sums.

The average ransom of $41,198 during the 2019 third quarter more than tripled from the first quarter, according to Coveware, which helps negotiate and facilitate the payments.

“You’d expect a ransomware demand that you can pay,” Castriotta said.

The US rate increases underscore broader global ransomware problems from which no company is immune.

Another attack in December paralyzed the Albany County Airport Authority’s administrative computers. It had to pay $98,705.96 in Bitcoin to get the system unlocked, a spokesman told Reuters. Its insurer, Chubb Ltd., covered the ransom, he said. Chubb declined to comment.

He called the increases “dramatic” but said insurers have not scaled back coverage.

Allianz is looking into price adjustments and whether ransomware should be a separate product from general cyber coverage, Castriotta said.

Sompo International is reviewing criteria for businesses that have been most vulnerable to ransomware, said Brad Gow, global cyber product leader.

Insurers including Sompo may also lower amounts they pay for ransomware attacks against higher-risk companies or shift to coinsurance, in which policyholders would pay 20% to 30% of ransomware claims, Gow said. They might also require those policyholders to have data-backup procedures.

“We can drive a win-win by helping our clients become better protected,” he said.