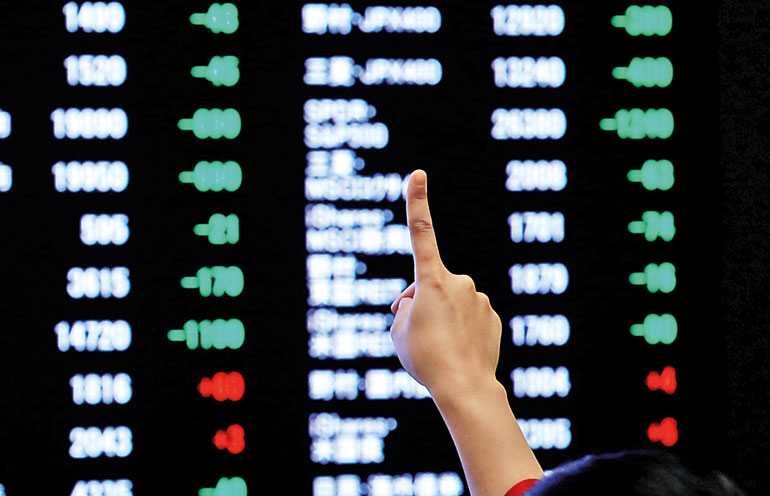 Reuters: Foreign outflows from Asian equities were the biggest in at least seven years in 2018 as the Sino-US trade war and slowing profits battered regional stocks last year.

Data from South Korea, Taiwan, India, Thailand, Philippines, Indonesia and Vietnamese stock exchanges showed foreigners sold a net $33.6 billion worth of equities last year, which was the biggest since at least 2012.

“2018 had been of little doubt a turbulent year, underscored by worries over US-China trade relations and growth among others,” said Jingyi Pan, a Singapore-based market strategist at trading and investments provider IG.

Net foreign flows turned negative for the first time in three years in 2018.

In a tit-for-tat trade war, the United States and China imposed tariffs on each other’s imports last year, which triggered concerns about the region’s growth outlook and pulled down Asia’s major stock indexes.

MSCI’s broadest index of Asia-Pacific shares outside Japan fell 16 percent in 2018, its sharpest drop since 2011. Chinese shares were the biggest losers in the region, shedding about 29% in dollar terms.

Regional economic growth is expected to cool further in 2019 amid softening domestic and export demand, but much will depend on how long it will take China to stabilise its cooling economy and whether Washington and Beijing can end their trade war. In China, the Caixin/IHS Markit PMI slipped into contraction territory in December for the first time in 19 months. 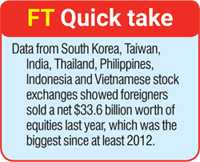 But the sharp selloff in Asian equities last year has made them cheaper in terms of price valuations and could lure investors back, some analysts said. “Asian equities are expected to see better interests into 2019 from the improved attractiveness from a valuations perspective and outlook. This is particularly with the Fed hike pace easing and the greenback paring in strength expected.” said IG’s Pan. The forward price-to-earning ratio of MSCI Asia ex-Japan index was 11.5 at the end of 2018, lesser than its 10-year average of 12.4.

Niall MacLeod, a strategist at UBS Equities, said in a note that Asian equities have already discounted a lot of the slowdown that he expects.

“In the short-term term, trade uncertainty is likely to contain the upside. As the year gathers steam we think that Chinese policy moves from headwind to tailwind, the tariff impact wanes, Asian growth troughs and sequentially improves from Q2,” said MacLeod.

“Against this backdrop, we think equities will re-rate.”