The decreasing trend in the weekly weighted averages continued at Tuesday’s Treasury bill auction, led by the benchmark 364-day bill with its weighted average dipping by six basis points to a 19-week low of 10.52%.

The exact total offered amount of Rs. 24 billion was met at the auction as the total bids to total offer ratio increased to 2.78:1. 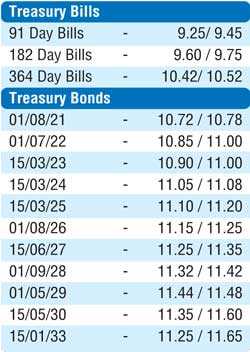 In money markets, the Open Market Operations (OMO) department of the Central Bank of Sri Lanka was seen infusing amounts of Rs. 17.70 billion and Rs. 10 billion each on an overnight, seven days and 14 days basis at weighted averages of 8.78%, 8.84% and 8.86% respectively yesterday.

The overnight call money and repo rates averaged 8.85% and 8.86% respectively as the net liquidity shortfall in the system increased to Rs.36.18 billion Tuesday.