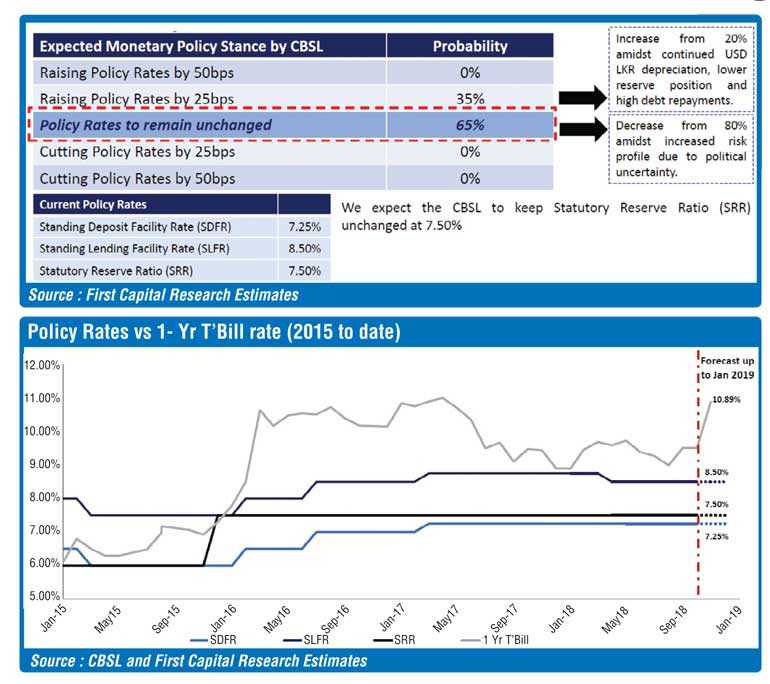 President’s appointment of a new Prime Minister, subsequent dissolution of Parliament, and calling for elections, led to a controversy relating to the constitution which created political turmoil impacting both the debt and equity markets.

With the Fed raising rates by 25bps to 2.25% in September 2018, foreign outflow of Rs. 48.4 billion was witnessed from the debt market since our last Pre-Policy report (published on 28 Sep 2018) while equity market saw an outflow of Rs. 10.4 billion during the same period creating pressure on the rupee. Despite the inflow of $ 1.0 billion commercial loan from China Development Bank, foreign reserve position stood at $ 7.9 billion as of end of October 2018.

Currency depreciation was further aggravated by the turmoil prevailed in the political front which led to LKR:USD reaching an all-time low of 175.60 on 31 October while currency depreciated by 14% YTD to close at 175.25 on 09 November amidst continuous foreign outflows from both equity and debt markets outweighing the effect of $ 1.0 billion foreign inflow.

Yield curve continued its uptrend across all maturities predominantly on the short tenure maturities which experienced a steep increase of 110-135bps.

Continuous outflows and a possible Fed rate hike in December 2018 may intensify pressure on the currency as $ 1.5 billion worth of Sovereign Bonds fall mature in the next 3-6 months period.

Weakening rupee and continuous foreign outflows may warrant a rate hike, but is unlikely to reverse the fund flow into foreign inflows. Further, below par GDP growth level and lower credit growth provide less scope for the monetary board to increase rates as the possibility of a rate cut would further aggravate the foreign outflows provoking a further weakening of USD:LKR.

Considering the prevailing political and economic conditions of the country, First Capital Research believes that policy rate change is not required. However, we are of the view that a 35% probability exists for a rate hike, depending on the ability to raise foreign borrowings to service the maturing debt in early 2019.

First Capital Research expects the Monetary Board to hold rates, as a rate cut would aggravate the foreign outflows increasing the pressure on the rupee while a hike would hinder the growth. However, we recognise a 35% probability of a 25bps rate hike considering the USD:LKR depreciation, lower foreign reserve position and higher foreign debt repayments in January – April 2019. We believe the political situation has hampered the ability to raise foreign debt over the next 6 months, thus affecting reserves.

We expect the CBSL to keep Statutory Reserve Ratio (SRR) unchanged at 7.50%.

First Capital Research is of the view that a continuation of policy rates is appropriate. However, we recognise an increased probability of 35% for a rate hike, amidst increased risk profile owing to prevailing political uncertainty and continued foreign outflows in spite of considerably low GDP growth and sluggish credit growth.