Bond market activity dries up ahead of weekly bill auction 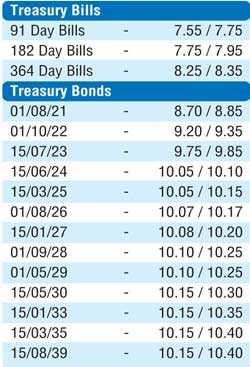 In money markets, the overnight call money and repo rates increased marginally to average 7.41% and 7.48% respectively as overnight liquidity turned negative to record a net deficit of Rs. 9.58 billion yesterday.

The Open Market Operations (OMO) Department of the Central Bank of Sri Lanka injected an amount of Rs. 15 billion on an overnight basis by way of a Reverse Repo auction at a weighted average of 7.38%.

In Forex markets, the Interbank USD/LKR rate on spot contracts were seen closing the day marginally higher at Rs. 180.50/60 against its previous day’s closing levels of Rs. 180.85/95 on the back of selling interest by banks.

The total USD/LKR traded volume for 6 September was $ 61.25 million.