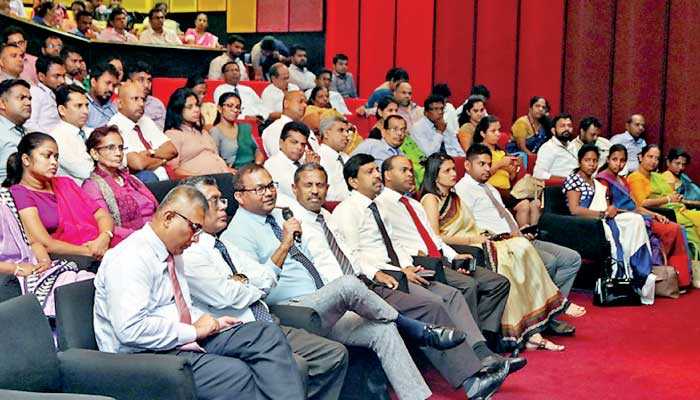 The Association of Professional Bankers – Sri Lanka, held the Bankers Evening Forum on Tuesday, 9 July with an inspiring presentation together with an interactive Q & A session on an embryonic topic which is ‘Economic Survival in Turbulent Times’. As we are living in a VUCA environment, as bankers we need to be vigilant on the new trends in the external market and how it affects in making an informed decision. Accordingly, APBSL organised this presentation together with the Q & A session to gain more insight on this emerging topic.

The forum was held at the BOC Head Office Auditorium and a number of participants including professionals, bankers and other special invitees attended the event. The speaker for the day was none other than Prof. Sirimal Abeyratne. He is a Veteran Speaker, Professor in Economics, University of Colombo. He is also the Chairman of Monetary Policy Consultative Committee of the Central Bank of Sri Lanka and the Chairman in Institute of Policy Studies. He holds a MPhil and MA (International Institute of Social Studies, The Hague), PhD in Economics (Free University, Amsterdam). He also holds a Postgraduate Diploma and BA Honours (University of Colombo). He is engaged in diversified areas of teachings such as Macroeconomics, International Economics and Development Policies and Issues.

The professor commenced his speech by explaining the economic context of Sri Lanka and the impact of the monetary and fiscal policy measures of Sri Lanka towards a growth or decline in the economic growth. He explained the country’s situation using the decline of the tax revenue and current account deficit. Then he focused on the economic growth within the international markets together with the investment growth using some facts and figures.

Then he mentioned the modes of external finance sources such as stable forex inflows and volatile forex inflows. In a turbulent time, there will not be any stable forex inflow for the country. Therefore, economists, bankers and other professionals need to keep an eye on this volatile and complex scenarios occurring in the world which will directly and indirectly affect Sri Lanka’s economic growth.

Further the professor explained about the nature of country’s export and import trade. Further, he explained the reasons for the economic downturn and the decline of country’s exports using two examples comparing Sri Lanka with Bangladesh and Vietnam. He emphasised the fact that even though both Sri Lanka and Bangladesh exported the same amount 15 years ago, now Bangladesh is ahead of us in exports where they export $ 40 billion worth of goods. He also emphasised the fact that both Sri Lanka and Vietnam exported the same amount: $ 4 billion 25 years ago. However, now Vietnam’s exports amount to $ 234 billion which shows the current adverse situation of Sri Lanka in terms of exports.

He focused on the Sri Lankan Government’s financial position. He focused on the decline of tax revenue, recurrent expenditure and the public investment. He also mentioned about the current account deficit and its impact on Sri Lanka’s economy. The Professor identified that there are two types of turbulent situations such as internal shocks and global economy. The internal shocks can be identified as political uncertainty, security issues and elections. The global economic issues can be identified as US economic policies, US-China trade frictions, Destabilised EU and Brexit.

Finally, Prof. Sirimal Abeyratne initiated the panel discussion to further clarify his deliberations. This session was an exciting one where everyone joined to get more insight on the topic.