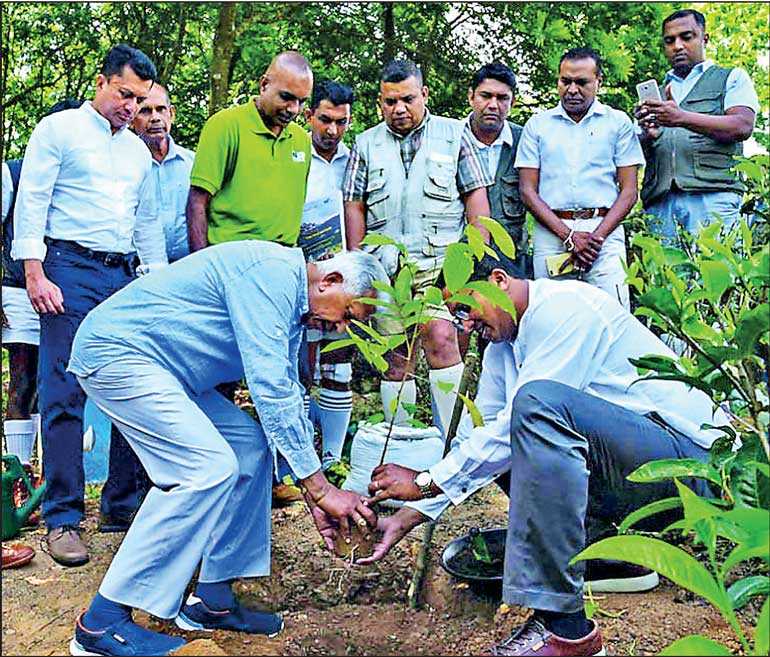 In 2018, Dilmah Tea founder, Merrill J. Fernando uprooted the tea bushes at Dilmah’s tea garden at Endana to create a nature corridor across the estate, reconnecting Sri Lanka’s fragmented forest ecosystems in the region. The initiative looks towards enhancing the genetic diversity around the Sinharaja Rainforest, a UNESCO designated World Heritage site and Biosphere Reserve, by linking the nearby Walankanda and Iharakanda Forest Reserves.

The second phase of this initiative, Endana Nature Corridor, commenced with the planting of 70 different plant species with support of both scientists and the plantation community in May.

The Walankada and Iharakanda Forest Reserves are interspersed by settlements of the plantation community and is woven into an agricultural landscape dominated primarily by tea – a highly valued cash crop. An extensive survey was conducted to assess the region’s biodiversity and soil conditions to determine the types of trees that can be planted here while identifying the best methods for soil conservation. It also identified, that the active engagement of the plantation community, whose lives revolve around the success of tea, is vital for minimising habitat fragmentation and for ensuring the sustainability of this initiative.

Floral and faunal species are threatened by habitat loss, habitat destruction, tourism, other human activities including global warming. Despite Sri Lanka’s relatively small size, it displays a rich species diversity and high level of endemism. Several endemic species currently listed as threatened like the rough horned lizard (Ceratophora aspera) and the hump-nosed lizard (Lyriocephalus scutatus) were found within the Walankanda region. Owing to its unique topography, the Endana tea estate depicts a high level of faunal diversity which includes 34 endemic and 20 threatened species. The estate itself is used as route by some birds and mammals to migrate between the forest reserves. The creation of a biological corridor across this landscape thus offers a promise of increasing the survivability of existing species by strengthening their genetic admixtures.

The initiative looks at restoring the region to a luxuriant rainforest like the Walankanda Forest Reserve where 181 tree species were recorded of which nearly 60% was found to be endemic. “Some endemic tree species were recorded in survey locations close to Walankadna Forest Reserve as we expected. Most of the other tree species were non-endemic to the island because relatively young forests like the woodlands and scrubs within the corridor do not possess high endemism compared to primary forests. However, the saplings we found indicate a promising potential to restore the corridor to its former state in years to come,” says Dr. Nalaka Geekiyanage, the principal scientist, who had conducted the survey under the guidance of veteran scientists Prof. Nimal Gunathillake and Prof. Savitri Gunathillake.

The Endana nature corridor, which will thus be established on the principles of scientific conservation looks towards setting an example for the corporate sectors, by adopting integrated approaches that consider the role and livelihood of rural communities in biodiversity conservation. “As a business with an enduring connection with nature, we wanted to correct the historic imbalance. Together with the local communities, Dilmah is uprooting our precious tea and rewilding part of the Endana Estate to reconnect forest patches. This will enrich the genetic diversity of species and restore this sensitive rainforest ecosystem. Conservation is no longer an option, it is as essential as the air we breathe,” said Dilmah Tea CEO Dilhan C. Fernando.