How the first technology accelerator “spiralation” is making an impact 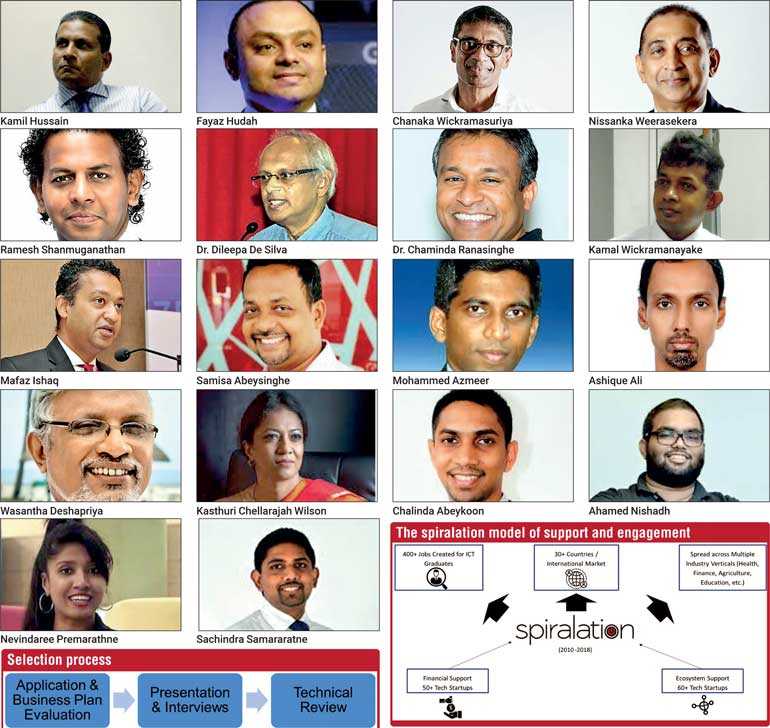 spiralation was the first technology accelerator in Sri Lanka. It provided funding as a grant, so without equity and a copious amount of support through the various training programs and opportunity to learn, network and grow for tech startups in the country. spiralation stands for “spiral of innovation,” a term

coined by Fayaz Hudah, its founder.

From 2004, ICTA was implementing a series of programs to support and grow the IT/BPO sector in Sri Lanka through various incentive programs with funding from the World Bank. These included everything from training company employees and paying for companies to get various certifications to helping companies develop business overseas.

One such program was called ‘Innovation Grants,’ which was aimed at commercialising innovations that were mainly coming out of research institutions and universities although it was not restricted by design. This program was a failure for a number of reasons.

Fayaz says: “I had this dream of doing things like Richard Branson from my school days. I decided to change the innovation grants program to support new technology startups. As it served a much-felt need in the market but was incomplete in its design to deliver on expectations.”

The challenges in getting started

All of this started at the time when the term “startup” was not heard of in Sri Lanka. The IT/BPO industry was not supportive as they felt the rise of startups would draw away employees from their companies and threaten their business model of renting employees for overseas companies and keeping a margin.

Much has changed since then, but this was when things were quite different. The only program that came close to spiralation was a business plan competition organised by the British Council limited to local university graduates. The Software Exporters’ Association later joined this program.

The World Bank, which funded ICTA programs, didn’t want this program to be implemented as it was uncomfortable with the high risk of spending money on companies that had a very high probability of failure. Despite these challenges, the internals managed to convince the management and eventually the stakeholders by insisted on getting the program implanted as they saw the future.

On 31 July 2010 at Taj Samudra, spiralation was launched. Startup Chile started later in 2010 and today is one of the best program in LATAM and 500 Startups which is global now. John Davies, Global Vice President, Intel Corporation, was the Chief Guest. It was launched with the support of 20+ partner organisations including IIT Madras, Boston University, banks, universities, technology MNCs, chambers of commerce, professional organisations, etc.

spiralation has had a long association with the Global Entrepreneurship Network (GEN) and the 1st GEN branded event was held in 2012 at the Peradeniya University with participants from Colombo, Jaffna and Kandy. One of the early hackathons at the time to be held for a full three days straight for 54 hours.

The whole experience is fondly remembered by the participants who booked a special train cabin on a train to Kandy, which had a derailment halfway and managed to get them to even make an unscheduled stop at the Peradeniya University train stop.

Since its companies were more aligned to Western markets, spiralation provided the platform for companies like Arimac, SilverLeap, Mogo and PayMedia to exhibit and attend 4YFN (4 Years From Now) event in Barcelona for the first time which is held in parallel to Mobile World Congress (MWC), the global mobile industry annual must attend event. This has been repeated since.

Building quality technology products costs money because the technology infrastructure is expensive, which a startup can ill afford. Identifying this, the spiralation team worked with Microsoft to bring this program to Sri Lanka. This was done even before it was made available to India when the program was only available in the US and Europe. This initiative with Microsoft gave their enterprise grade products free of cost to selected startups under the spiralation program. They also provided free training.

The program by design was focused on developing certain types of companies which ideally accrue intellectual property. Hence companies who are aligned to such goals or have such potential are preferred. These include:

Given the great benefits the program provides at no cost to the accepted companies the selection process is quite intense.

The value of the investments made by the Government is amplified by the efforts put in by the mentors and judges who have shared their valuable time willingly. Fayaz says: “I think this is priceless and has been a key reason for the program’s success. Being able to attract such personality to support at the right time and providing them with the right brief to fit each company, has been the real game changer which I think is still hard for many to replicate.”

Some of them include the who’s who of the business, technology and professional fields in the country:

The evolution of the team that handled the spiralation program:

Ahamed Nishadh from ICTA and Kanishka Weeramunda from PayMedia founded the Disrupt Asia Conference and Startup Festival which has been successfully hosted twice now.

The program now organises the above event, which is now at an international scale with the participation of everyone from unicorn founders and global accelerator program managers.