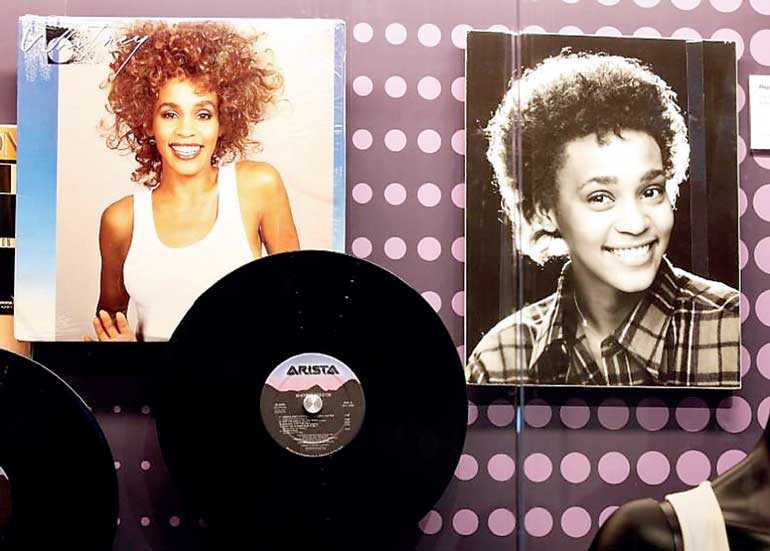 File Photo: One of the Arista record label albums by late singer Whitney Houston is pictured during a press preview of the new exhibit “Whitney! Celebrating The Musical Legacy of Whitney Houston”, at The Grammy Museum in Los Angeles, California 15 August 2012. Grammy award winning singer Houston was found dead in a Beverly Hills hotel room on 11 February 2012 – Reuters

Reuters: Late superstar Whitney Houston and five other artists and bands, living and dead – and representing a wide range of musical genres, including pop, electronica and rap – were unveiled on Wednesday as this year’s inductees to the Rock & Roll Hall of Fame.

The six 2020 inductees were selected from among 16 bands and musicians nominated by a committee in October. More than 1,000 artists, rock historians and members of the music industry cast ballots to pick the winners, the Rock Hall said.

Four of this year’s class — Houston, the Doobie Brothers, Notorious B.I.G. and T.Rex — were on the ballot for the first time.

The Cleveland-based Rock Hall will make the inductions official on May 2 with a televised ceremony featuring yet-to-be named special guests after a weeklong celebration.

Landau may be best known for his clairvoyant review of a 1974 Boston-area concert by a then-struggling Bruce Springsteen that said: “I saw rock and roll’s future and its name is Bruce Springsteen.” He became Springsteen’s co-producer for the next 18 years.

Azoff has been a concert promoter, record label owner and music publisher, and his namesake company manages a stable of rock bands and other entertainment figures.

Houston, the “I Will Always Love You” singer who ranks as one of the most successful female recording stars of all time, died in 2012 after drowning in a hotel bathroom at age 48. The Notorious B.I.G., who was killed in a drive-by shooting in Los Angeles in 1997, had hits that included “Juicy,” “Big Poppa,” and “Warning.”

The Doobie Brothers, whose music often mixed rock and country, emerged in the 1970s with hits that included “Listen to the Music,” “Long Train Runnin’” and “China Grove.” T.Rex also found success in the 1970s as a psychedelic folk-rock band with hits such as “Jeepster” and “Cosmic Dancer.”

Depeche Mode emerged in the post-punk late 1980s with electronica music that included “Personal Jesus” and “Enjoy the Silence.” Nine Inch Nails found success in the 1990s with industrial rock hits, including “Closer” and “Hurt.”