On an initiative taken by Ambassador Rodney Perera, the Sri Lankan Embassy hosted a felicitation ceremony on 15 August at the chancery premises at which a group of iconic Sri Lankan performing and musical composers were honoured and celebrated in recognition of their lifetime contribution for the Sri Lankan drama and music industry. 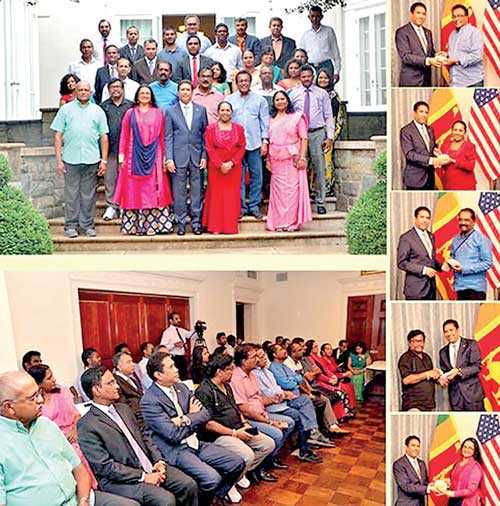 The group was in Washington DC as part of a US tour organised by several Sri Lankan associations in different states of the USA, to promote Sri Lankan culture, music, theatre and drama among Sri Lankans and Americans at all levels.

Among those honoured at the event included legendary Sri Lankan theatre artistes, Nissanka Diddeniya, Menike Attanayake, Bandula Wijeweera, Ravindra Yasas and Ferni Roshini accompanied by well-known music composers, Sarath Peiris, Susantha Madurapperuma and Suranga Geeganage. In his brief remarks, Ambassador Rodney Perera extended a warm welcome to the group of artistes and thanked them for taking time off their busy schedule to visit the Embassy of Sri Lanka in Washington DC. Appreciating the Sri Lankan artistes for touring the US and entertaining Sri Lankan audiences in Washington DC and elsewhere, the Ambassador hailed their outstanding contribution to promoting Sri Lankan theatre, drama and performing arts around the world at a time when classical and conventional forms of art has lost its place, pride and demand from fans of the modern era.

He assured those present of his commitment and support towards promoting and nurturing Sri Lankan traditional and authentic art forms in the US and thanked the artistes as well as Sri Lankan Associations for their steadfastness and dedication for the propagation and revival of Sri Lanka’s unique culture, art and drama and music among the Sri Lankan community and well-wishers.

The artistes were presented with tokens of appreciation. Each of the artistes together with their career highlights and lifelong contributions to the industry were featured in the form of theatre trailers specially choreographed and screened by the Embassy staff for the occasion. The President of the Ranga Kala Kavaya speaking on the occasion appreciated the initiative taken by the Ambassador to honour and felicitates the artistes. Representing the group of artistes, Nissanka Diddeniya, and Ferni Roshini also delivered remarks in which they all thanked the Ambassador and staff for recognising their contribution to the field.