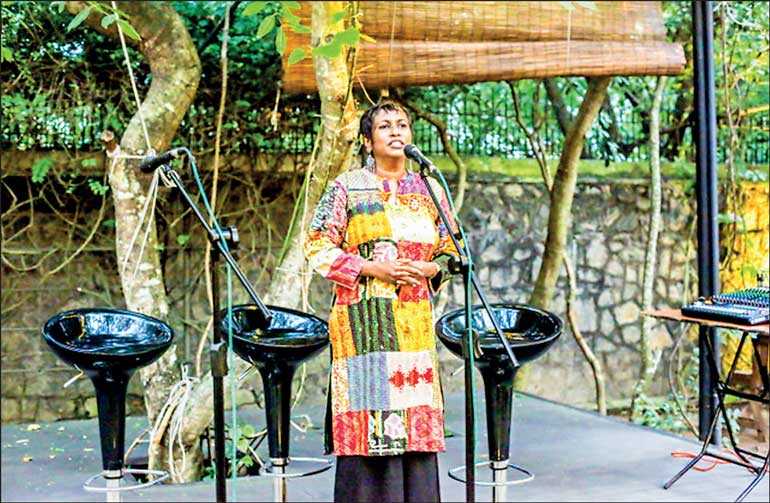 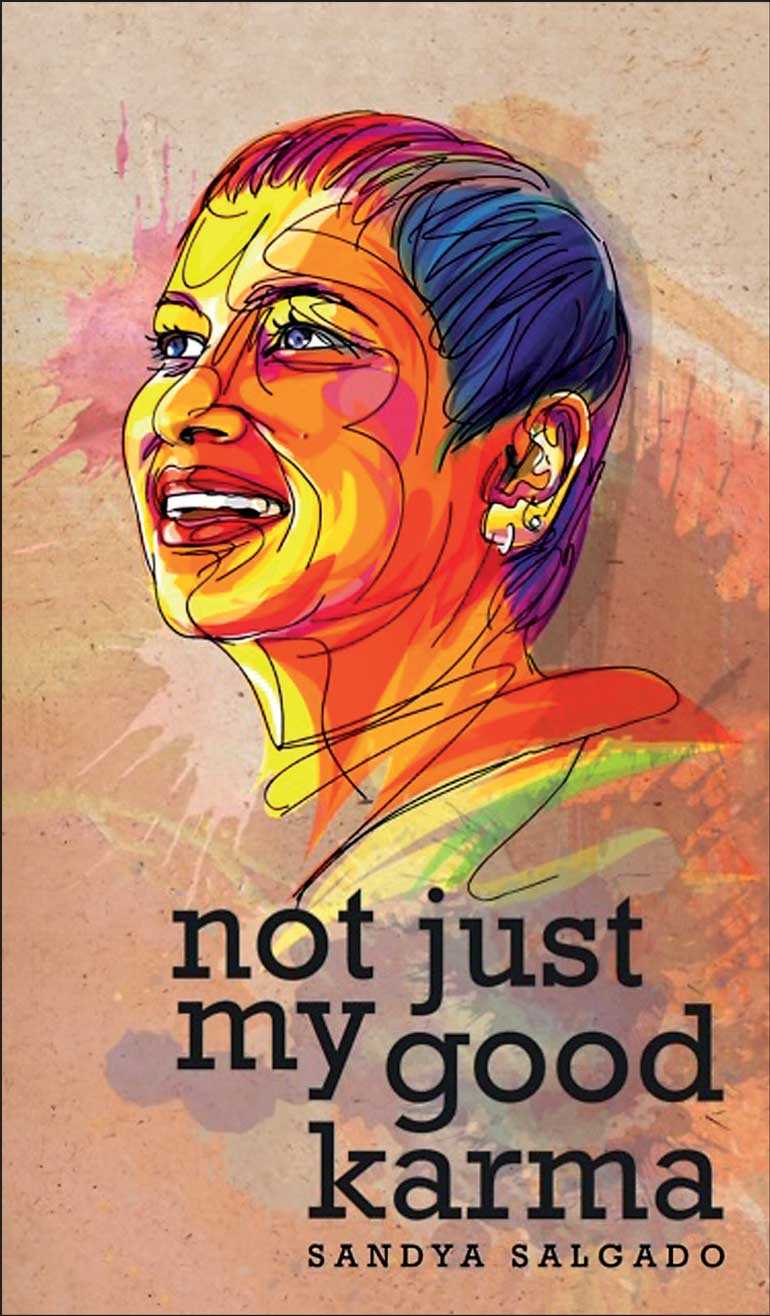 The launch was at the Sooriya Village, and the event was colourful to say the least and the gathering was mostly literature-lovers and friends and family of the author. They had come to honour the author Sandya Salgado when she entered the world of writing with her one-of-a-kind maiden memoir ‘Not Just My Good Karma’.

The main attraction of the evening was a Sinatra ‘sing-alike’, who came all the way from California and gave a more-than-passable rendition of ‘My Way’. Shiran Sinatra certainly added a different dimension to the launch. It was only when I was reading the book that I realised that this memoir from Panadura was all about ‘Her Way’. Sandya Salgado has let off a blast of the times and life she led, without pulling punches, which resonated with the simplicity and complexity of how we lived in the bygone years. Would you believe there were two prominent girls’ schools in Panadura, and who went to which was often determined by the caste of the student? This was obviously long before the writer was born.  That was one part I read with great interest, as this caste business is still very much in vogue, though hidden behind the curtains. Ask an undertaker; he will tell you how a funeral is planned according to caste. Author Sandya bares it all.

The book is the true representation of people who lived over fifty-plus years ago. Yes, they did have asparagus sandwiches sitting in Archchi’s lawn, and under the same roof the ‘servants’ ate in the kitchen seated on short stunted banku and hiramana. Their old Johnson & Johnson plates that had seen better days were chipped and cracked, and they drank water from the tap using handle-broken tea cups. The modern will frown at the unfairness of it all. But it sure was the norm, we all came from similar households, and today carry some guilt of it in our lily-white souls. But then that was the norm, and I am glad the author opens a Pandora’s box of forgotten inequalities that plagued our society. These facts in the book are all familiar to us, and whilst we appreciate the honesty of expression, we must also remember the world has got older, and the dirty linen has either been discarded or washed clean in most cases. Old family tales are all great. This story is an autobiography and it all began at No. 381, Nalluruwa, the family home where the author was born and raised. The ‘My Way’ song I mentioned at the beginning sure fits the menu, as ’Not Just My Good Karma’ is the story of someone who grew up shifting away from the paradigms, and drawing her own demarcations of life in a society of custom and tradition. The instances are many that the author became a rebel without much of a cause, but they are all very interesting to read, and far too many to elaborate in a short review. A young girl’s room full of posters of Skeeter Davis, David Cassidy, and their kind, along with a full and prominent Col. Gaddafi is an example. The book would tell you the rest, about the ‘kalu mesay’ and the vangediya, and the army of visitors who strutted in at all times. Who’s who they were and what they spoke of and why are all interesting anecdotes. Of course I must mention the saucy sentiments sheepishly added about the domestics’ GNT (gaanu naana thena), and a bit of this and that added about their changing room, which sprayed some lunumiris to liven the tableau.

Panadura is unique, quirky, and quaint; that is what the author says about her home town. Yes, it had an ‘old skin’ that was hard to shed like its caste conservatism, but it was also a tolerant racial mix relative to today’s catastrophic divisions. Manoharan and Maheswaree sold groceries, and Makeens is now a 4th generation Muslim who has a clothing shop; they were prime examples of racial equality. Then there are the Panadurian characters that pop out of the pages. The vegetable seller at the pola who spoke politics, the author’s ‘Uni Batcha’ who became a head priest in a prominent temple, and the daayakaya’s wife who did some ‘jilmart’ with ‘Komali.’ These and many more jump in and out of the pages of this book to add the icing to the cake. Read about Podi Salgado and Loku Salgado, and see how they fit the Sandya saga. I almost forgot, include Doctor Fairly too. If you have had any connection to Panadura, this is a must-read book, which has nostalgia flowing out from page one to the end.

Let’s ponder now about the author and her journey in life, expressed in frankness. The beginning was about living with a ‘darker shade of pale.’ Not the whiter version that Joe Cocker sang, but the real-life local apartheid, that a shameless society created when someone was born with a dark complexion. “I was not taken to be Bridesmaid at my cousin’s wedding because I was dark,” writes the author. This applies very much so in the present day right across the board, and especially to women. Males get away light, simply being called Kaluwa or Kakka. If you are young and belong to the female of the species, and have even distant thoughts of using Fair and Lovely – forget it – just read this book and you certainly will muster more courage to tell anyone who hums ‘Ba Ba Black Sheep’ to go to hell. That sure is what Miss Panadura did.

There is a lot written here about climbing the stairway of the corporate world. The author, purely through hands-on experience, tinkers with the subject for the reader to pick and avoid the pitfalls, and learn to walk the plank to progress keeping his or her balance. Gender bias evaluations, sexual abuse accusations, know-all Macho Machangs, and know-nothing queen bees from the fairer sex, they are all in the ‘Good Karma’ cast, pushing and shoving to reach the peak of the pyramid. Battles raged constantly with none raising white flags. That is the corporate world where the author gives subtle details of her own pothole-filled path to the top, which makes excellent reading and adds the flavour as lessons for others to learn from. She’s walked a lot before the chariots came, after all, she is a woman and she’s no Snow White, and she hailed from Panadura. Q.E.D.

All this was happening while she ran her home and raised two children. She even became the barber to her husband’s curly-haired head, and it’s sure interesting to know how she lost that job? “Keep the crown in the garage when you enter the house” that is the mantra she followed, which is the best advice I saw in her repertoire to boardroom mums, or the lesser mortals who double-act between office and home.

No doubt ‘Not Just My Good Karma’ is a delightful read. I walked to Barefoot recently and saw Sandya staring from a book shelf and Nuwan the modern bookman of Thurstan Road Vijitha Yapa showed me the book as I entered. So ‘Good Karma’ is readily available to the reading public. It does appeal to an SL audience, and certainly to anyone who is linked in any way to anyone or anything connected to Panadura.

I think I have written enough to excite and awaken the poth kahaderayo like you and me. Have a go at ‘Not Just My Good Karma’, you will not be disappointed.

(The writer may be contacted at Elmojay1@gmail.com.)