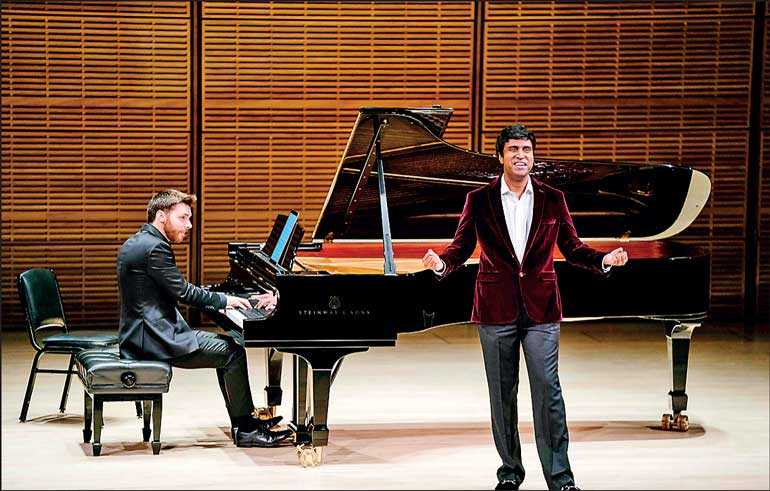 The internationally acclaimed Operatic Baritone/Actor/Filmmaker Gehan Cooray – who was referred to by Marc Cherry, the creator of ‘Desperate Housewives’ as a “multi-hyphenate” (which is a Hollywood term for an artist who is versatile) – enraptured one of the most distinguished audiences assembled at Carnegie Hall this past October with his first solo concert at the legendary venue. The Chief Guest at Gehan’s Carnegie Hall debut was none other than the Chef de Cabinet to the United Nations Secretary General, Maria Luiza Viotti.

Gehan received several and sustained standing ovations at Carnegie Hall, where he performed for one and a half hours without a microphone (because Gehan firmly believes that one’s singing technique should not change across genres – enabling him to bring the same power and resonance required by Opera into non-classical songs as well) at the venue’s second largest auditorium Zankel Hall – he is in fact the only Sri Lankan singer to have been a Headliner there.

Among the praise bestowed upon Gehan that night, one of the most touching compliments was paid by Daniela Bas, the United Nations Director of the UN Department of Social and Economic Affairs’ Division for Inclusive Social Development. An Italian national, Bas made it a point to mention that if she were to close her eyes and simply listen to Gehan sing Opera, she could swear that Gehan were a native Italian singer himself, because his Italian diction is so perfect and precise. Gehan performs in eight different languages, and his current vocal coach in Los Angeles is Shigemi Matsumoto (who has collaborated multiple times with none other than Luciano Pavarotti). Gehan has also studied in New York with Gerald Martin Moore.

Gehan is poised to thrill audiences in his native Colombo once again on 18 January this year at Bishops College Auditorium (7:30 p.m.) – in a concert aptly titled ‘Unforgettable’, organised by the Rotary District 3220 (Sri Lanka and Maldives) for their Annual Rotary International Fundraiser. Collaborating on Piano will be the illustrious and versatile Soundarie David, who is herself a Rotarian. All proceeds of the concert will be directed towards the humanitarian efforts of the Rotary.

The first half of the program will feature some of the most melodious and lyrical operatic arias and classical pieces ever written (from among Gehan’s personal favourites), while the second half of the program will feature a range of nostalgic old standards close to Gehan’s heart such as ‘La Vie En Rose’, ‘The Battle Hymn of the Republic’, ‘Fly Me To The Moon’, ‘I Could Have Danced All Night’ and of course ‘Unforgettable’ among a number of others. There will be a special guest performance by the renowned singer Rukshan Perera, himself a Rotarian.