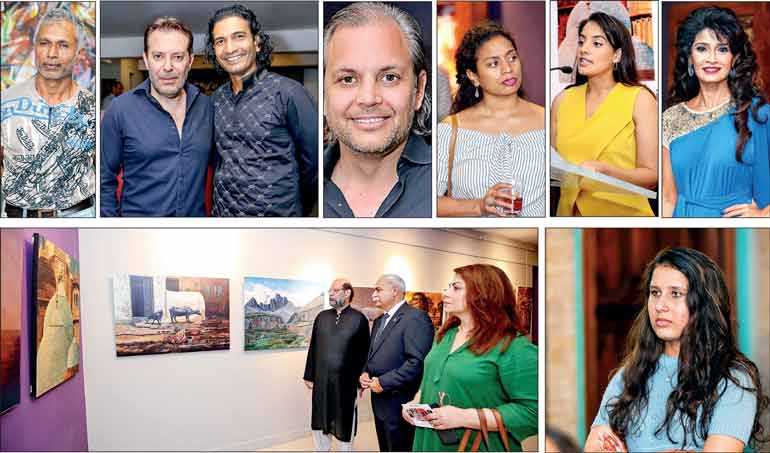 World-renowned Pakistani artist Jimmy Engineer, together with local artist Mueen Saheed, recently collaborated for the opening of Billari Art Gallery, in Colombo.  The art exhibition and opening had many leading personalities and art lovers present to witness the works of Engineer and Saheed.

Speaking at the opening, Engineer emphasised on how art can influence one’s life and giving back to the world should be a top priority. “We bring nothing and we take nothing,” he emphasised, and he hopes that his art will bring peace and happiness to the world. He will be travelling often to the country - a lot of his work will be displayed at the gallery in the months to come.

He further plans to create a lot of awareness through his work to the community and help those under privilege.  With his work internationally celebrated, this is Engineer’s way of giving back to all what he has got.

The event was graced by High Commissioner of Pakistan to Sri Lanka Dr. Shahid Ahamed Hashmat, who interacted with Jimmy and Mueen regarding paintings and art influencing Sri Lanka.

The Billari Art Gallery was officially opened on 8 March at 165/11 Park Road, Colombo 5.  It will showcase various paintings of many leading artists across the globe, and will be open for collaborations in the future.

About Mueen Saheed and Jimmy Engineer

Mueen Saheed has exhibited internationally in Delhi, Kuala Lumpur, Oxford, The Maldives, Bordeaux, and most recently in Paris where he had gathered a lot of attention for his work.  His creations have featured in many hotels, resorts and art exhibitions across the country and aboard.  He has collaborated with many leading artists and through his art raised awareness for many social issues including for gender-based violence and climate change.

Jimmy Engineer, a disciple of Sufi Barakat Ali, is a philanthropist in his own right who would like to introduce himself as a social worker as well. He has a special penchant for mentally or physically handicapped children in ‘Homes’. When he visited Sri Lanka several years ago, he was lavish to entertain more than 700 ‘special ‘children with good food singsongs and games taking them to several big hotels in Colombo and several other locations in the country. Walking for various noble causes has been one of his favourite ways to bring awareness to people in his country.

Many of his paintings are in private collections in Italy, France, Denmark, and Switzerland, Russia, India, China USA and several other countries.