Sri Lanka’s first Science and Technology for Society (STS) Forum will take place from 7 to 10 September in Colombo. Organised by the Prime Minister’s Office and the Ministry of Science, Technology and Research, it is one of the largest gatherings of its kind to

be hosted by Sri Lanka.

Modelled on Japan’s well known annual STS forums, this event will be attended by over 750 participants coming from 24 countries – among them will be local and foreign scientists, inventors, science managers, science communicators and students. The lineup of speakers includes several Nobel Laureates.

What sets STS Forums apart is that they are not merely events where scientists talk to each other.  That surely will happen, but there will be many more voices and, hopefully, much broader conversations.

As a member of the content planning team for this event, my particular focus has been on the strand called “citizen science” – interpreted, in this instance, as activities that enhance the public understanding of science and technology.

Under this strand, there will be four sessions that explore: community involvement in science and research; informal science education for the 21st century; communicating science, technology and innovation; and using social media for discussing science.

At first glance, these topics don’t seem as exciting as nanotechnology, robotics and space technology that are being covered in other sessions. But I would argue that public engagement is the most decisive factor if science and technology are to play a significant role in the economic development and future prosperity of Sri Lanka.

Public engagement of science goes well beyond teaching science and technology subjects in schools or universities. It is also bigger than (state or private sector driven) science centres, exhibitions or science content in the media. All these elements help, but at its most basic, what we need to promote is a way of thinking known as scientific literacy.

Scientific literacy is defined as “the knowledge and understanding of scientific concepts and processes required for personal decision making, participation in civic and cultural affairs, and economic productivity”. 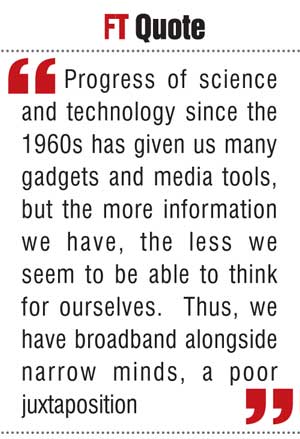 Indeed, some basic scientific knowledge and technical skills have become essential for survival in the 21st century. But scientific literacy provides more than just utility benefits.

As Dr. Neil deGrasse Tyson, American astrophysicist, cosmologist and science communicator, says, “Scientific literacy is an intellectual vaccine against the claims of charlatans who would exploit ignorance.”

Sri Lanka takes justified pride in its high literacy levels and equally high coverage of vaccination against infectious diseases. But we cannot claim to have a high level of scientific literacy.

If we did, it would not be so easy for far-fetched conspiracy theories to spread rapidly even among educated persons. For example, claims of an ‘infertility plot’ to make majority ethnic group lose its ability to reproduce. Or tales of miracle waters and ‘cosmic forces’ healing those terminally ill. Or alien spacecraft threatening national security…

It is customary to temporarily suspend our disbelief to enjoy films, novels and other creative art forms. But most of us don’t confuse fiction with fact, even with highly-plausible scenarios.

Yet when it comes to real life, as opposed to art, has ‘suspended disbelief’ become a default setting for many Lankans today? Is our society more gullible and paranoid now than it was a generation or two ago? If so, how come?

These inconvenient questions are worth asking, if only to make us pause and think.

Half a century ago, a Kerala-born science teacher named Dr. Abraham Thomas Kovoor (1898-1978) settled down in newly-independent Ceylon. After retirement, he took to investigating so-called supernatural phenomena and paranormal practices. He found adequate physical or psychological explanations for almost all of them. In that process, he exposed many ‘god men’ who were thriving on people’s ignorance, gullibility and insecurities.

Dr. Kovoor, who founded Ceylon Rationalist Association in 1960, summed it up in these words: “He who does not allow his miracles to be investigated is a crook; he who does not have the courage to investigate a miracle is gullible; and he who is prepared to believe without verification is a fool.”

Most Lankans would fall into one of these three categories – and the minority with open minds are under ‘peer pressure’ to assimilate!

Progress of science and technology since the 1960s has given us many gadgets and media tools, but the more information we have, the less we seem to be able to think for ourselves.  Thus, we have broadband alongside narrow minds, a poor juxtaposition!

This has been building up for some years. In an op-ed titled ‘Can Rationalists Awaken the Sleep-walking Lankan Nation?’ published in Groundviews.org in January 2012, I wrote: “Paradoxically, we now have far more communication channels and technologies yet decidedly fewer opportunities and platforms for dispassionate public debate. Today’s Lankan society welcomes and blindly follows 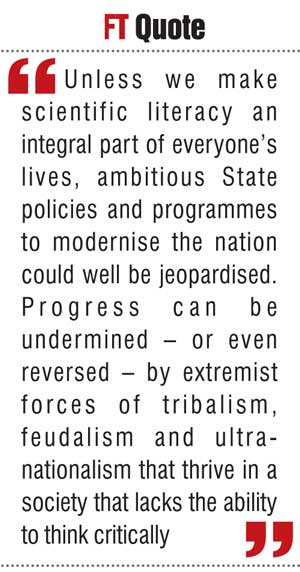 Malayalis who claim to know more about our personal pasts and futures than we’d ever know ourselves. And when we see how our political and business elite patronise Sai Baba, Sri Chinmoy and other gurus so uncritically, we must wonder if there is any intelligent life in Colombo…”

Not every source of mass hallucination is imported, of course. As I noted four years ago, “Sacred cows, it seems, have multiplied faster than humans in the past half century. Our cacophonous airwaves and multi-colour Sunday newspapers are bustling with an embarrassment of choice for salvation, wealth, matrimony, retribution and various other ‘quick fixes’ for this life and (imagined) next ones. Embarrassment, indeed!”

So what is to be done?

The proliferation of smartphones and other digital tools have not necessarily opened our minds, or made us Lankans any less gullible to charlatans or zealots. This is a huge conundrum of our times.

That is because mastery over gadgets does not necessarily give us scientific literacy. It involves a rational thought process that entails questioning, observing physical reality, testing, hypothesising, analysing and then discussing (not always in that order).

A healthy dose of scepticism is essential to safeguard ourselves from superstitions, political claims and increasingly sophisticated – but often dishonest – product advertising. That’s what scientific literacy builds inside our minds.

Unless we make scientific literacy an integral part of everyone’s lives, ambitious State policies and programmes to modernise the nation could well be jeopardised. Progress can be undermined – or even reversed – by extremist forces of tribalism, feudalism and ultra-nationalism that thrive in a society that lacks the ability to think critically.

A sporting analogy can illustrate what is needed. Cricket is undisputedly our national passion. It is played professionally only by a handful of men (and even fewer women) who make up the national teams and pools. But most of the 21 million Lankans know enough about cricket to follow and appreciate this very English game.

Similarly, there are only a few thousand Lankans engaged in researching or teaching different branches of science and technology – they are the ‘professionals’ who do it for a living. But in today’s world, the rest of society also needs to know at least the basic concepts of science.

Cricket didn’t has become part of our socio-cultural landscape overnight. It took years of innovation and persistence, especially by trail-blazing radio cricket commentators in Sinhala and Tamil. By the time we achieved Test status in 1981, all levels of our society were familiar with cricket’s rules and nuances.

‘Science for All’ acquires true meaning only when every citizen – irrespective of education, profession or income level – gets enough scepticism to avoid being exploited by various scams or misled by conspiracy theorists.

Are we ready to embark on this intellectual vaccination process?

(Award-winning science writer Nalaka Gunawardene counts over 25 years of national and international media experience. He blogs at https://nalakagunawardene.com and is active on Twitter as @NalakaG.)