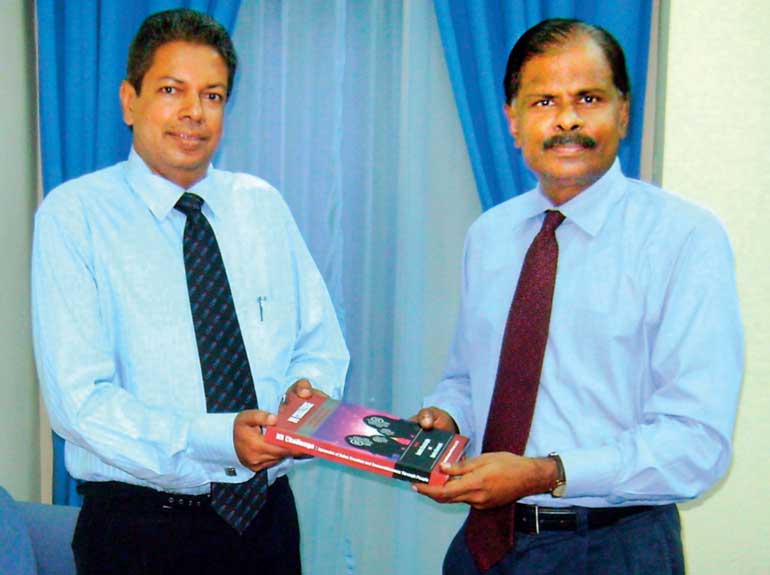 When I handed over the book co-edited by me to Prof. Liyanage

Time has passed by. Almost one year is gone after the sad demise of my mentor. A lot has been said by now about this legendary marketing sage, since his untimely departure in August 2015. The Postgraduate Institute of Management is making arrangements to have a ‘Bana’ sermon and a ‘Dhamma’ discussion on Saturday, 13 August at its premises as a mark of remembrance of our late leader. I think it is an opportune moment to focus on him. My attempt is not to repeat his accolades but to share my experiences in being influenced by this wonderful human being. Professor Uditha Liyanage was an invaluable instructor, inspirer and an influencer for me. Let me share some such reminiscent memories.

He was my marketing teacher at the Postgraduate Institute of Management (PIM). As an engineer who had never done marketing, I developed a flavour for marketing during my MBA studies, thanks to him. The way he generated interest in us not only for the concepts but also for the applications was indeed remarkable. He often advocated us to ‘be brilliant in basics’.

The way he delivered a session was much interactive and informative, as he firmly believed in ‘chalk and talk’. This was the case with numerous topics in Strategic Marketing, Marketing Communication, Consumer Behaviour, Research, Business Strategy and Policy. Of course, he had PowerPoint slides but not with just points but with powerful points. He always challenged us in asking “what is ‘the’ point?” We had to be clear about the central theme or the main argument.

Once he became the Director he recommended us to use four modes of teaching, namely tell, ask, do and show. His view was that in a three hour lecture, the telling should not be more than one third. The rest should be asking questions, doing activities such as case studies and showing videos followed by a discussion. We felt the variety and the versatility of his endeavours.

Prof. Liyanage insisted on understanding and application of managerial topics. He gave us a challenge. Be confident in sharing a key learning in your own words with your teenage son or daughter, in a manner that they understand. That requires clarity and commitment. He suggested us to have ‘switch on’ and ‘switch off’ approach. Switch on is when you are in complete focus with attentive concentration. Switch off means to relax and unwind.  A healthy blend of both is necessary in effectively grasping knowledge.

Developing teaching models was one of his key initiatives. A simple Google search would amply justify the popularity of those models in relation to marketing and strategy. ‘Liyanage Value Pyramid’, ‘Liyanage 10 S Strategic Marketing Planning Framework’ and ‘Liyanage Strategy Quadrant’ are some such models that became very useful for management learners. These authentic models made his sessions immensely enriching and also showcased the power of Sri Lankan thinking that is second to none.

Prof. Liyanage inspired me in many fronts. He was standing tall in front of all of us. As a sought-after marketing scholar, a strategic management thinker, an exceptional academic, a thought-provoking teacher and a visionary leader, he was a guiding light for us. I saw him rendering yeoman service in multiple ways in raising the PIM flag higher.

His exemplary character and competence were much evident in the manner he contributed to socio-economic upliftment as a great human being. We at PIM in fact have been privileged not only to associate him but to be immensely inspired by him. He shared the criticisms raised against MBAs by the CEOs and insisted that PIM MBA’s should be different. Thus came the slogan, ‘Do not just do an MBA but be an MBA’.

“The process of learning and one’s exposure to education must be continuous. There is so much more to be known, and that which you know may no longer be valid.” This had been Prof. Liyanage’s advice. He shared with us articles, web-links and books that are of high relevance to sharpening the managerial skills. I still remember how he shared the article on ‘Nishkam Karma’ (detached involvement) written by a Prof. Chakraborty from Indian Institute of Management, Bangalore. Prof. Liyanage was much interested in knowing my reflections on it, and it took time for me to realise the value of such gestures. Moreover, I see the immense value of detached involvement as a leader, thanks to him.

I saw the blossoming of transformational leadership at PIM with Prof. Liyanage. He influenced all of us to raise the quality and relevance of all modules we deliver. “Our business is mastery,” he often uttered. “PIM brings the reward of outstanding results to those professional managers who strive towards mastery.” That’s how he influenced the aspiring learners of PIM.

Converting practitioners to professionals with character and competence has been our endeavour.  PIM has always been a centre of excellence in management education with its winds spreading beyond Sri Lanka.  Much credit should go to Prof. Liyanage for elevating it even higher. PIM is proud of being a self-financed, semi-autonomous public entity. It was under his leadership that we became the first public sector higher education institute to obtain the ISO 9000: 2008 quality standards.

He influenced us to change for the better. Through his famous ‘mod-tradi consumer model’, he encouraged us to strike a balance between the traditions and technology. I still remember how he insisted us of using more practical examples in discussing a theory than being overly theoretical in neglecting the practice. He showed us through his innovative teaching approaches as to how we should maintain depth and breadth.

Prof. Liyanage compared PIM to a temple and often suggested that the work we do have a high spiritual value. He encouraged us to ‘give more than get’ with regard to rewards. Having left a lucrative multinational career in becoming an academic, this lesson was much soothing for me.

He cautioned me to strike the needed balance between knowledge creation and knowledge sharing, when I was having an over-demand for training and consultancy.  Research role, though not financially rewarding is of extreme use for a management academic. I learnt how to be a multiple role player with balance and brilliance, thanks to him.

“The emergence of the Conceptual Age, also called the Age of Imagination, reframes the educational and learning processes you must be engaged with in your quest for continuous awakening, the continuous development of yourselves.” That’s how Prof. Liyanage advised the graduands of the University of Sri Jayewardenepura, a few years ago. He in fact ignited our imagination in encouraging us to think big. We at PIM have chosen our theme as ‘igniting human imagination’.  He simply convinced us that future belongs to those who create it.

Life is not only to live but to leave a legacy. Prof. Liyanage has aptly done that in his knowledge creating and knowledge sharing life.  “In order to succeed, people need a sense of self-efficacy, to struggle together with resilience to meet the inevitable obstacles and inequities of life”, so said Albert Bandura, the most admired living psychologist of our times. This was very true of Prof. Liyanage.

He had a purpose to live and it was indeed a purpose driven life. His thoughts will spark our minds for a long time. We at PIM commit ourselves to carry his legacy forward. I am humbly happy to lead a learning community in such a noble endeavour. He strived to make PIM a centre of management excellence. We are committing ourselves to continue his legacy, in making it better, bigger and brighter. When we celebrate 30 years of existence next January, we will sadly miss the physical presence of the management sage of our age.

Good bye my beloved instructor, inspirer and influencer. May you attain the supreme bliss of Nibbana.