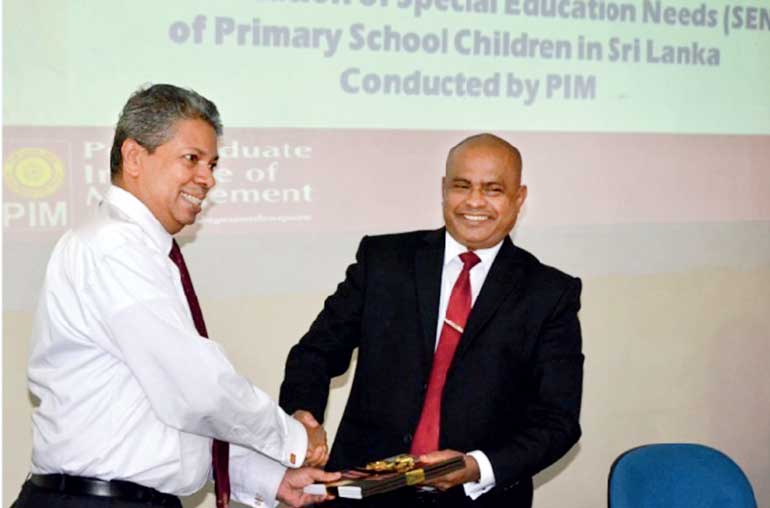 It was a delight to witness a research landmark made through a comprehensive study of special education needs (SEN) of primary schoolchildren in Sri Lanka. It was conducted by six working managers as their final project of the MBA at the Postgraduate Institute of Management (PIM). Today’s column is all about its context and content and the manner in which it was conducted.

Industrial surveys of this nature which are consistent and compliant with applied research norms are classic answers to critics who often complain that research does not bring out results of practical significance. The PIM’s role in research has always been results-oriented. We emphasise the managerial implications of applied research in highlighting the needed contribution towards the socioeconomic upliftment of our nation.

Let me commend the effort taken by the student researchers ably guided by the PIM Research Centre. Conducting an industry survey involving a sample of 12,000 is by no means an easy task. The commitment demonstrated by them, along with the required clarity and collaboration, is a clear sign of an emerging vibrant research culture at PIM.

As the investigators described, this study is based on an applied research approach by the PIM Research Centre. It has been revealed that 78.9% of teachers and school managements are untrained or unqualified in SEN, and that 80% of teachers were unaware of the policies prevailing in Sri Lanka on SEN. This highlights a significant lacunae in the education sector when it comes to access to education and inclusiveness of children with special needs.

It is interesting to note that Sri Lanka is having a near universal adult literacy rate and a high primary school enrolment. This is

primarily due to the free education policy and the Compulsory Education Ordinance (CEO). However, out of the 10.6% population of schooling-aged children with disabilities, only 4.6% have access to education. This emphasises the current trend in education, which does not support all children being enrolled in regular schools.

As the SEN study report reveals, with the introduction of regulations such as the CEO, the National Policy on Disability 2003 and the National Action Plan for Disability Final Draft 2013, most schools were faced with the challenge of enrolling students of different capabilities.

“After the signing of the Salamanca Statement in 1994 by 144 countries, including Sri Lanka, educational trends internationally and nationally have changed significantly,” observes the report. “Their focus is to provide ‘education for all’ by the States, irrespective of cast, creed, nationality or physical and mental condition of children,” it adds.

This initiated regulations to provide education for students who may not otherwise be enrolled in schools due to their physical and/or psychological conditions.

The study population consisted of teachers, management and parents of primary schoolchildren in the schools of the Colombo and Gampaha Districts in the Western Province, Sri Lanka. Ninety-eight schools (including government, semi-government, international and private) were covered by distributing 12,152 questionnaires.

As the study reveals, 80% of teachers were unaware of the policies prevailing in Sri Lanka in relation to SEN. It further highlights that the awareness of inclusion and diversity of education of teachers too were very poor (19.9%). Although policies and guidelines of education are perceived to be known by academics, the study revealed a contrasting outcome. This encouraged a sector-based analysis to understand a sector-based view. This in-depth analysis revealed that international, private and semi-government schools were more aware in comparison to the government sector (41.36%) which was low. A respondent confirmed this finding saying, “Government schools are backward in enrolling SEN children. It is the opposite situation in international and private schools where such children are naturally directed to.”

The study revealed a lack of adequate resources in schools for teachers to teach SEN students. The respondents also agreed that the curriculum was inflexible for them to teach SEN students. Teachers are expected to finish the syllabus within a specified period, supporting regular students sitting national/International examinations. Further, teachers do not possess the freedom to change or relax the curriculum to suit the needs of SEN students who may not be in a position to reach the desired national standards. 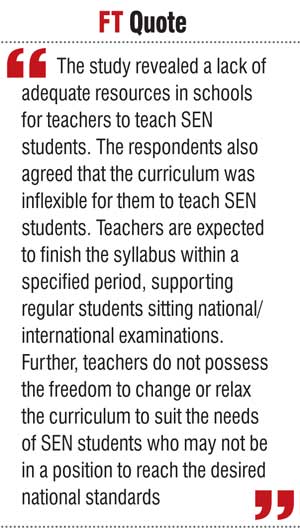 at any level in most schools covered. Without a proper process being implemented it is a difficult task to identify SEN students especially when the teachers are not aware or qualified to do so. This, in fact, appears to be a serious concern in the field of education.

The participating teachers further stressed that they have not received any institutional training in teaching SEN students. Those who responded that they were trained or qualified did it on their own personal interest at different institutes that were found by them.

This finding is justified as most teachers possessing a degree have not undergone teacher training. The tendency in education is that when graduates join school they get themselves trained on the job. Therefore, teachers may not be in a position to teach SEN students. Most often teacher training colleges are mainly government institutes that do not enrol outsiders. Therefore, teachers of other institutes seek training are deprived of any special training facility.

The main findings of the study also highlighted the unwillingness of parents to share their child’s classroom with SEN students. These parental attitudes have severe consequences on inclusive education as it represents societal attitude. This could be due to the finding that parents perceived the difficulty in giving equal attention to all students, and the lack of adequate resource availability in schools to provide inclusive education. They rejected the concept of inclusion, indicating that SEN students should be in separate schools.

Introduction of a proper SEN identification process when admitting students to schools and the identification of students who are late bloomers will also assist in enhancing the standards of education in Sri Lanka. This process should be put in place so that the schools will have a uniform method of identification.

Relevant officers should be trained on the methodology and required competencies and skills and qualifications should be defined for such job roles. This process should direct parents to proper professionals who are qualified and capable of handling these special instances. It is best that these are directed by school authorities. Further, the introduction of proper procedures is a must to monitor the improvement processes of SEN students, once their special needs are identified.

The investigators found that the early identification of needs acts as a precursor to improving the standards of education of SEN students. This will definitely reduce the constraints that the general public will have in supporting such children. It has been revealed that the number of SEN children has increased gradually in recent years. The reason for this development is yet unknown. Therefore, before this issue becomes a national burden it is prudent that the Government and the public take necessary precautionary measures to negate the ill-effects such a trend would have on society at large.

We look forward to delivering many meaningful monographs of this nature in the time to come. I have no doubt that the findings of this survey will be of the utmost importance to policymakers as well as practitioners alike with regard to SEN.

‘No Child Left Behind’ needs to be our motto and it requires that all students are learning and are reaching their highest potential. Children with special education needs cannot be and should not be left out of the accountability mechanisms. The investigators have aptly quoted Albert Einstein: “Everybody is a genius. But if you judge a fish by its ability to climb a tree, it will live its whole life believing that it is stupid.”