Home / Columnists/ Garbage in Meethotamulla vs. garbage in the mind

Garbage in Meethotamulla vs. garbage in the mind 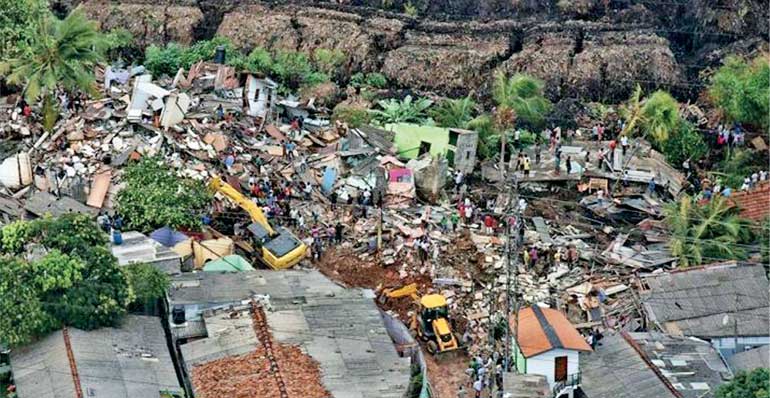 Piles and piles of words have been uttered about the Meethotamulla mayhem. While the world was moving towards advanced scientific solutions concerning garbage management, were we more worried about commissions, votes or popularity? Shouldn’t we have been more proactive than reactive in focusing more on deeds rather than words? There is no point in pointing fingers at anyone at this juncture. I see a huge pile of garbage in the mind, rising much higher than the garbage in Meethotamulla. In fact, the eve of Vesak is an opportune time to reflect on garbage in the mind.

“There are no good or bad countries, only well-managed or ill-managed countries,” Peter Drucker, the veteran management thinker, said so many years ago. Management spreads across all functions, disciplines and professions in highlighting the need to ensure sustained results. Garbage management is one vital part of that complex mechanism. One can cynically argue that, having a comparatively high literacy rate as a nation and having a competent set of leaders, managers and administrators, why couldn’t we simply manage our garbage? Is it an issue of a right person not being in the right position and hence not taking the right actions? Perhaps garbage in the mind would have prevented managing the garbage in Meethotamulla.

My intention is not to criticise the ignorance and inaction of those responsible for this human tragedy. Also, I am not an expert to suggest the ecologically and economically viable solutions. Let me attempt to reflect on the garbage in the mind which pushes us to think and act like laggards and not as leaders and which serves as being mostly damaging rather than helping us in managing. Vesak can be a good time for needed purification.

Mind as the forerunner

“What we are today comes from our thoughts of yesterday, and our present thoughts build our life of tomorrow; our life is the creation of our mind,” said the Buddha while highlighting the significance of the mind-body relationship.

As he vividly puts it Samma Ditti (right seeing) leads to Samma Vayama (right action). You can’t go ahead and achieve something noble unless you see it clearly. In simple terms, clear thinking leads to clever action.

As the first stanza of the revered text, the Dhammapada, states: “Mano pubbaagma dhamma, mano setta manomaya.” This essentially means that the mind is the forerunner for all things.

While its supremacy has always been undisputedly accepted, ‘What is the mind?’ has been a perennial question. Philosophers strived to describe it while psychologists struggled to define it. As one relatively simpler definition says, the mind is the human consciousness that originates in the brain and is manifested especially in thought, perception, emotion, will, memory and imagination.

Psychologists such as Sigmund Freud and William James have developed influential theories about the nature of the human mind. In the late 20th and early 21st centuries the field of cognitive science emerged and developed many varied approaches to the description of the mind and its related phenomena.

In Sigmund Freud’s psychoanalytic theory of personality, the conscious mind consists of everything inside of our awareness. This is the aspect of our mental processing that we can think and talk about in a rational way. The conscious mind includes such things as the sensations, perceptions, memories, feeling and fantasies inside of our current awareness.

Cleaning the garbage in the mind

I am a firm advocate of the Five S system, the time-tested housekeeping method from Japan. It stands for the five Japanese words

that start with the letter ‘S’: Seiri, Seiton, Seiso, Seiketsu and Shitsuke.  An equivalent set of five S words in English have likewise been adopted by many to preserve the Five S acronym in English usage. These are: Sort, Set, Shine, Standardise and Sustain.

The Five S system offers a systematic approach in keeping things in order. It is a visual technique of ensuring proper housekeeping as well. As Hiroyuki Hirano (1995) states in the ‘Five Pillars of the Visual Workplace’, Five S forms the bedrock for productivity. Further, Takashi Osada, (1995) highlights in ‘The Fiv5S’s: Five keys to a Total Quality Environment’, it offers a pathway for quality and productivity improvements.

I tend to think that we need to apply the Five S to the Mind as a way of clearing garbage. It is worthwhile discussing each S in detail.

This is the starting point. Typical workplace activities include going through all the tools, materials and so forth in the plant and work area. Keeping only essential items and eliminating what is not required, prioritising things according to their requirements and keeping them in easily-accessible places are other key actions. Everything else is stored or discarded.

The way I see it, the deep relevance of Seiri to the mind is purposefulness. In order to ensure clarity over clutter with ‘Right Seeing’ (Samma Dhitti), one needs to identify positive thoughts, constructive emotions and unbiased perceptions with a clear purpose in mind. This is much more difficult than sorting things in a workplace.

This typically means arranging the workplace, equipment, parts and instructions in such a way that the work flows free of waste through the value added tasks with a division of labour necessary to meet demand. It follows the practice of ‘everything has a proper place’.  It is all about efficiency.

As I observe, the deep relevance of Seiton to the mind is prioritising. It requires focusing on value creation. Connecting thoughts in a logical manner with proper analysis is the need. It in fact helps oneself to focus on tasks linked to targets in the context of overall purpose. What is connected to the purpose has to be a priority. The rest has to be “set aside” to be done only when time permits.

This involves cleaning the workspace and all equipment and keeping it organised. In a typical factory, at the end of each shift clean the work area and be sure everything is restored to its proper place. This step ensures that the workstation is ready for the next user and that order is sustained.

The way I see it, the deep relevance of Seiso to the mind is purity. This is where the spiritual dimension looms large. Pure thoughts devoid of malice, jealously and other negativities are what are required. A shining mind is a spiritual mind empathising with others compassionately.

This is all about uniformity and consistency. In a typical workplace, uniform procedures need to be ensured throughout an operation to promote interchangeability.

I think the deep relevance of Seiketsu to the mind is perseverance. So many start-ups might end up halfway through without proper completion. A mind that is geared towards perseverance will ensure continuity of a recommended habit, preferred value or a best practice. One needs determination and dedication in order to sustain noteworthy initiatives.

This refers to ensuring the disciplined adherence to the previous four Ss. It assists in preventing a possible backsliding to where thing were prior to the implementation of the Five S system.

The key word here is discipline. It denotes practising the Five S system as a way of life. As the Japanese say, the emphasis of Shitsuke is the elimination of bad habits and the constant practice of good ones. Once true Shitsuke is achieved, people will keep things naturally, without reminders and warnings.

The way I see it, the deep relevance of Shitsuke to the mind is proactiveness. With a proactive mind, purposeful, prioritised and pure actions can be continued with perseverance. In essence, it sums up the overall application of the Five S system to the mind.

Sri Lankan leaders, administrators and managers can embrace the above five Ps and then engage in the five Ss so that mind and matter can both be organised in a better way.

We need to transform ourselves into a disciplined society with adherence to values. Vesak is the right time to reflect on humanity in an enlightened manner. We need to overcome our multiple inner battles. Being conscious of valuing green over greed is one such choice. Being conscious of valuing principles over privileges is another. Being open-minded and holistic instead of being opportunistic and harmful is yet another value-centric decision. When the opposite happens the consequences are very clear. You make a garbage pit a goldmine by making easy money in the short-run but pave the way for dire consequences to occur.  The mayhem in Meethotamulla is just a recent demonstration of human (or rather inhuman) behaviour. Let me revisit the first stanza of the Dhammapada to conclude.

Mind’s their chief, mind-made are they.

If with a corrupted mind

One should either speak or act

Dukkha follows caused by that,

As does the wheel the ox’s hoof.