From ego to eco: Strengthening sustainability

We are plagued with multiple environmental challenges. While garbage disposal is still chaotic, dengue mosquitoes continue to inflict misery upon millions. Do we see eco-friendly initiatives or egos clashing with individuals adamantly clinging to their positions and opinions? It is time to revisit sustainability with its associated implications. Let me label it a clarion call to shift from ego to eco in strengthening sustainability. 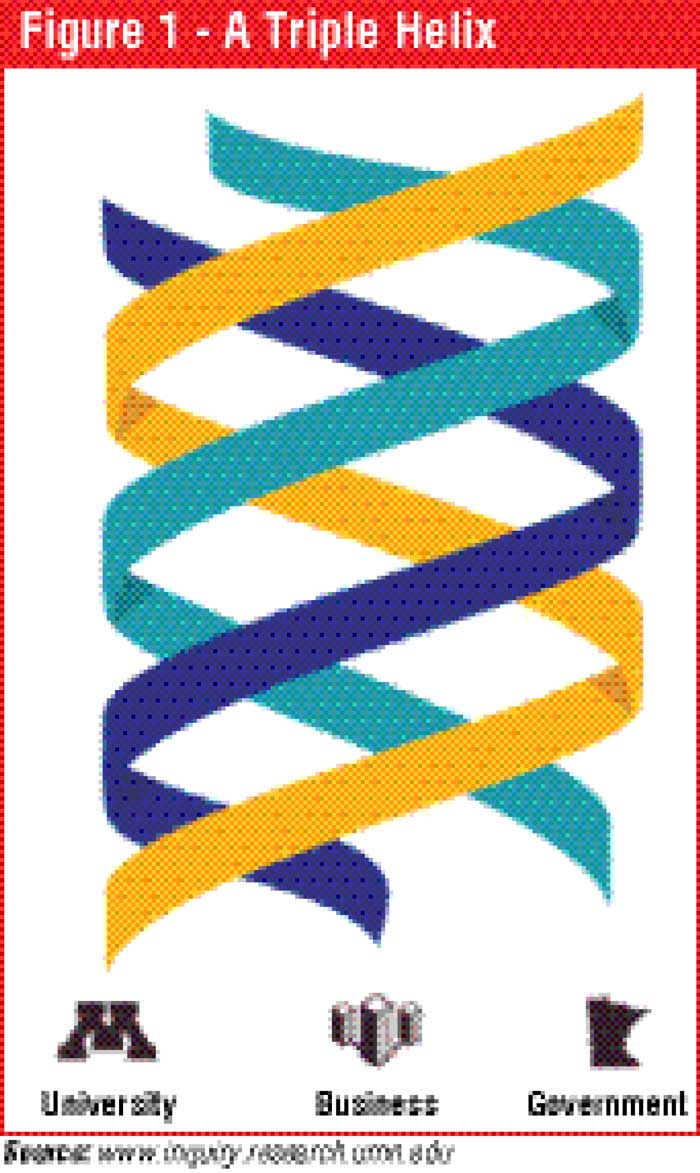 I just returned from the Netherlands where we had a one-week-long study program at the Maastricht School of Management for senior public administrators of Sri Lanka, organised by the Postgraduate Institute of Management (PIM).

Amidst this valued exposure, we gained much insight through the concept of strengthening sustainability through a Triple Helix approach with ecosystems.

Let’s be clear about the key concepts. Ecosystems are essential for nature. The typical biology textbooks call it a community of living organisms that provide the basis for survival and sustainability. A helix can be considered an object having a three-dimensional shape like that of a wire wound uniformly in a single layer around a cylinder or cone, as in a corkscrew or spiral staircase.

Mathematically, it is a curve in three-dimensional space. It has the property that the tangent line at any point makes a constant angle with a fixed line called the axis. In that sense, a Triple Helix (or helices) is a set of three helices with the same axis and located in an intertwined position. Scientists reveal the presence of such formations in our DNAs.

The name sustainability is derived from the Latin ‘sustinere’ meaning to maintain, support or endure. Since the 1980s sustainability has been used more in the sense of human sustainability on Earth and this has resulted in the most widely quoted definition of

Corporate social responsibility (CSR) can be viewed as a form of corporate self-regulation integrated into a business model. It can be described as an organisation’s sense of responsibility towards the described community and environment (both ecological and social) in which it operates. CSR policy functions as a self-regulatory mechanism whereby a business monitors and ensures its active compliance with the spirit of the law, ethical standards and international norms. In essence, sustainability and CSR speak of the same priorities from an organisational point of view.

The concept of a Triple Helix applied to sustainability began in the mid-nineties. It was initiated as an intertwined approach connecting university, Government and industry. The Triple Helix movement, launched by Prof. Henry Etzkowitz and Prof. Loet Leydesdorff began in 1996 when a workshop was organised in Amsterdam to discuss the Triple Helix model. This first workshop brought together 90 researchers and attracted participants from Latin America, Europe, North America, Australia and Asia. The workshop was subsequently referred to as the first international conference on the Triple Helix.

Veterans such as Etzkowitz (1993) and Etzkowitz and Leydesdorff (1995), encompassing elements of precursor works by Lowe (1982) and Sábato and Mackenzi (1982), interpret the shift from a dominating industry-government dyad in the ‘Industrial Society’ to a growing triadic relationship between university-industry-government in the ‘Knowledge Society’.

As the Triple Helix research group of Stanford University states, “The potential for innovation and economic development in a Knowledge Society lies in a more prominent role for the university and in the hybridisation of elements from university, industry and government to generate new institutional and social formats for the production, transfer and application of knowledge.”

This vision encompasses not only the creative destruction that appears as a natural innovation dynamics (Schumpeter, 1942), but also the creative renewal that arises within each of the three institutional spheres of university, industry and government as well as at their intersections.

Through subsequent development, a significant body of Triple Helix research has grown over the last two decades that provides a general framework for exploring complex innovation dynamics and for informing national, regional and international innovation and development policymaking.

The growing number of participants demanded the coordination of intensified annual events and Triple Helix conferences after 2009. The growing interest and participation in the Triple Helix movement led also to the idea of creating an association that is able to pull together and facilitate interactions among international scholars sharing common research interests.

In 2009 the creation of the Triple Helix Association (THA) took place in Turin, Italy, where the TH Association is headquartered at Fondazione Rosselli, and is chaired by Prof. Henry Etzkowitz, with Prof. Loet Leydesdorff and Prof. José Manoel Carvalho de Mello serving as Vice-Presidents. (www.triplehelixassociation.org)

The creation of the association and the organisation of the subsequent annual conferences, opened space for engagement on an annual basis with multiple stakeholders, academics, scientists, policymakers and practitioners with interests in the Triple Helix model. The annual conference in Madrid, Spain (2010) was focused on the cities of knowledge and the expanding knowledge and connecting regions.

The London event in 2012 brought the issue of open innovation and invited participants to challenge the Triple Helix model, while extending and deepening the application of the conceptual apparatus, created as part of the evolution of the Triple Helix academic community. The large number of participants (over 300) from 35 countries indicated the emergence of a Triple Helix movement, anchored by the THA and spinning into numerous academic and practitioner domains.

As the Stanford university sources advocate, the Entrepreneurial University is a central concept to the Triple Helix. It takes a proactive stance in putting knowledge to use and in creating new knowledge. It operates according to an interactive rather than a linear model of innovation. As firms raise their technological level, they engage in higher levels of training and knowledge sharing. A government acts as a public entrepreneur and venture capitalist, in addition to its traditional regulatory role in setting the rules of the game.

“As universities develop links, they can combine discrete pieces of intellectual property and jointly exploit them. Innovation has expanded from an internal process within and even among firms to an activity that involves institutions not traditionally thought of as having a direct role in innovation such as universities. The academic ‘third mission’ - involvement in socio-economic development, next to the traditional missions of teaching and research, is most salient in the Entrepreneurial University.”

The Entrepreneurial University also has an enhanced capacity to provide students with new ideas, skills and entrepreneurial talent. Students are not only the new generations of professionals in various scientific disciplines, business, culture etc. but they can also be trained and encouraged to become entrepreneurs and firm founders, contributing to economic growth and job creation in a society that needs such outcomes more than ever.

Entrepreneurial universities also have an enhanced capacity to generate technology that has changed their position from a traditional source of human resources and knowledge to a new source of technology generation and transfer. Rather than only serving as a source of new ideas for existing firms, universities are combining their research and teaching capabilities in new formats to become a source of new firm formation, especially in advanced areas of science and technology. Universities, increasingly becoming a source of regional economic development, and academic institutions are reoriented or founded for this purpose.

The Triple Helix approach in utilising the research strengths of universities with experiential insights of the industry within a conducive policy framework of the Government has paved the way for sustainable results in several developing and developed countries around the world. Sri Lanka is no exception. In fact, we can appropriately adopt best practices. The dire need is to start from somewhere with supportive leadership. That requires a conversion from ‘ego to eco’.

I recall a series of seminars conducted in Sri Lanka by Dr. Wayne Visser, the Chair of Sustainable Business at the Gordon Institute of Business Science in South Africa, where similar sentiments were echoed. As he observed: “A doctor judges his/her success by whether the patient is getting better (healthier) or worse (sicker). Similarly, we should judge the success of CSR by whether our communities and ecosystems are getting better or worse. And while at the micro level – in terms of specific CSR projects and practices – we can show many improvements, at the macro level almost every indicator of our social, environmental and ethical health is in decline.”