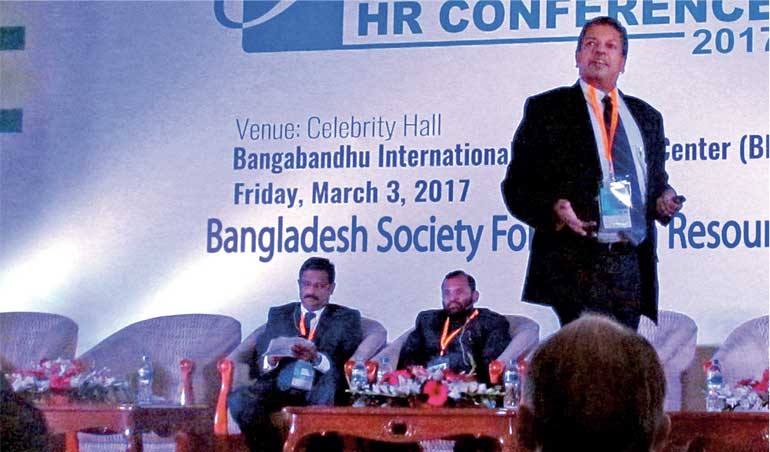 I was delighted to be the first Sri Lankan to be the keynote speaker at the International Human Resource Conference of Bangladesh. It was not only an opportunity to keep the Sri Lankan Flag high but also an occasion of connecting, communicating and collaborating.

The fitting theme for the highest ever attended HR conference of Bangladesh was ‘Exchange to Change’. In fact, I visited Bangladesh after ten years and saw the vast change that has taken place for better. Also how their cricketers, currently touring Sri Lanka, have come of age is a case in point. Today’s column is a reflection of change in the broader context of management.

As we are aware, change is the only permanent thing in the whole world. Not only everything is changing but the rate of change has also been accelerated. Do we like change? It says that the only person who loves change is a baby with a wet diaper. Change is uncomfortable. Human nature is such that there is resistance to move beyond comfort zones.

Renowned Novelist D.H. Lawrence puts this so vividly: “No one fears a new idea, what they fear is a new experience.” Telling is easy and doing is difficult. That’s why you need to drive change. There are many instances both local and overseas, where change initiatives have failed due to lack of leadership.

Whether we like it or not, change has become a necessity in an increasingly competitive world. As Charles Darwin said: “It is not the strongest species that survive, nor the most intelligent, but the ones who are most responsive to change.” Whether you distinct or extinct will depend on how you respond to change. It can be a case of being a victor or a victim.

John Kotter, an authority on leadership and change, claims that 70% of the major change initiatives in organisations fail. Based on his findings, he has identified an eight-stage process for achieving successful change in an organisation.

According to Kotter, the first four steps in the transformation process help defrost a hardened status quo. “If change were easy, you wouldn’t need all that

effort,” says he. Steps five to seven then introduce many new practices. The last stage grounds the changes in the corporate culture and helps make them stick.

It is worthwhile to look into Kotter’s eight-stage process and to see its relevance to Sri Lankan managers. Let’s go step by step.

Step 1: Establishing a sense of urgency

According to Kotter, establishing a sense of urgency is necessary to gaining the cooperation needed to drive a significant change effort. Most companies ignore this step – indeed close to 50% of the companies that fail to make needed change make their mistakes at the very beginning.

Leaders who understand the importance of a sense of urgency are good at taking the pulse of their company and differentiating between complacency, false urgency and true urgency. For those that determine that true urgency is insufficient – and it often is – there are some tried and true approaches to developing it and one way that is almost certainly doomed to failure.

Sri Lankan managers, the way I see, have somewhat been successful in establishing a sense of urgency.

No one person, no matter how competent, is capable of singlehandedly doing the vital things. These include developing the right vision, communicating it to vast numbers of people, eliminating all of the key obstacles, generating short term wins, leading and managing dozens of change projects and anchoring new approaches deep in an organisation’s culture. Putting together the right coalition of people to lead a change initiative is critical to its success.

Sri Lankan managers also face with the dilemma of selecting the right people in driving change. Sometimes such guiding coalitions have acted as true catalysts in ensuring change whilst others have ended up being catastrophic. We have many examples for both of the above cases.

A clear vision serves three important purposes, says Kotter. First, it simplifies hundreds or thousands of more detailed decisions. Second, it motivates people to take action in the right direction even if the first steps are painful. Third, it helps to coordinate the actions of different people in a remarkably fast and efficient way. A clear and powerful vision will do far more than an authoritarian decree or micromanagement can ever hope to accomplish.

With regard to the Sri Lankan scenario, we can see a growing awareness of the need to have a clear vision. Multinationals and blue-chip conglomerates are spearheading the move in being more strategic. However, forming a vision is just one step. Sharing of it and getting the required support for it from all concerned is the thing that needs major improvements.

Step 4: Communicating the vision for buy-in

Gaining an understanding and commitment to a new direction is never an easy task, especially in complex organisations. As Kotter observes, under-communication and inconsistency are rampant. Both create stalled transformations.

Sri Lankan managers are no better. We see major communication gaps in the areas of getting the buy-in for change initiatives. Every human being is interested in knowing how a new initiative can impact him/her. Some of the recent protests by several segments of the local society are a clear indication of this aspect not properly taking place.

Kotter says that empowering employees involves addressing four major obstacles: structures, skills, systems and supervisors. Structural barriers are often the internal structures of companies work as cross-purposes to the change vision. An organisation that claims to want to be customer focused finds its structures fragment resources and responsibilities for products and services.

Realigning incentives and performance appraisals to reflect the change vision can have a profound effect on the ability to accomplish the change vision, observes Kotter. Management information systems can also have a big impact on the successful implementation of a change vision.

Another barrier to effective change can be troublesome supervisors. Often these managers have dozens of interrelated habits that add up to a style of management that inhibits change. They may not actively undermine the effort, but they are simply not “wired” to go along with what the change requires. Sri Lanka has got them in abundance.

According to Kotter, for leaders in the middle of a long-term change effort, short-term wins are essential. Running a change effort without attention to short-term performance is extremely risky. The Guiding Coalition becomes a critical force in identifying significant improvements than can happen between six and 18 months. Getting these wins helps ensure the overall change initiative’s success. Research shows that companies that experience significant short-term wins by fourteen and twenty-six months after the change initiative begins are much more likely to complete the transformation.

As we have seen in Sri Lanka, short-term wins also tend to undermine cynics and self-serving resistors. Clear improvements in performance make it difficult for people to block the needed change. Likewise, these wins will garner critical support from those higher than the folks leading the change (bosses, board and shareholders). Finally, short-term wins have a way of building momentum that turns neutral people into supporters, and reluctant supporters into active helpers.

Emphasis here is to use increased credibility to change systems, structures and policies that do not fit the vision. It also included hiring, promoting and developing employees who can implement the vision. Reinvigorate the process with new projects, themes, and change agents are a matter of priority.

In Sri Lanka we are mostly starters and not finishers. The relatively higher number of foundation stones compared to the completion plaques is one such evidence. Constant focus in driving change towards success is what we should do more.

Step 8: Incorporating changes into the culture

Culture is how people collectively behave with shared norms and values. Gert Hofstede, the veteran Dutch anthropologist calls it “collective mental programming”. Articulation of the connections between the new behaviours and organisational success is the essential requirement here. The need to develop the means to ensure leadership development and succession also occupies high prominence.

This also is a significant area for improvement for Sri Lankan managers. I have personally witnessed many instances how a massive change initiative dies down in the face of a leadership change. The crux of the change has not planted in the organisational culture and as such when people come and go, change initiatives also will be shortlived. The sure cure is to develop awareness and conduct attitudinal training in order to embed the change in the culture.

Change invites you to move beyond a comfort zone. It applies to individuals, interactive teams and also to institutions. Both in the private and public sectors, change has become simply a necessity. How effective we are in creating change and sustaining the impact remains to be seen.