Commuting and communicating for communityship

I am writing this column while enjoying the warm hospitality of the Philippines. It was in Manila that the bi-annual meeting and knowledge sharing forum of the Asia Pacific Federation of Human Resource Management (APFHRM) was held. I participated as the capacity of the President of Institute of Personnel Management (IPM) Sri Lanka and they appointed me as a Vice President of the APFHRM. Today’s column is a reflection on “communityship” in relation to commuting and communicating in the Sri Lankan context.

The moment I typed the heading, the Word spellchecker highlighted that there is no such word. It is in a way correct. It is refreshingly new. I came across it after reading the inspiring book, “Simply Managing” by one of my all-time favourites, Henry Mintzberg.

Living in communities is nothing new for east and west alike. We have Sangha societies in Buddhist context. We also have Monasteries in Christian context. The commonality in both is the way a group of members of a community living. It involves sharing of a common set of values, respecting one another and a high degree of collaboration. Also, it invites the members to display synergy in their actions and reactions.

“We need to rethink management and organisation, beyond leadership to communityship, by realising how simple, natural and healthy they can be”. So says Henry Mintzberg in the concluding sentence in his seminal book “Simply Managing”.

“It seems that we are over-led and under-managed,” says Mintzberg. Many may disagree. Yet, you cannot undermine this candid Canadian veteran. Having contributed to management in proposing ten key managerial roles way back in 1971, he is sharp and sensible in his criticism. I had this confusion early in my management teaching stages about the real difference between a manager and a leader, and in a broad sense management and leadership. Thanks to global thought leaders, now I have a clear way out.

For me, management is a process and leadership is a phenomena. Every manager has a “leading” function to perform. When it gets expanded, he/she thinks and acts more as a leader.  What Mintzberg Invites us is even to go beyond. In his website blog (www.mintzberg.org), Mintzberg elaborates why he says so.

“How can you recognise communityship? That’s easy. You have found it when you walk into an organisation and are struck by the energy in the place, the personal commitment of the people and their collective engagement in what they are doing. These people don’t have to be formally empowered because they are naturally engaged. The organisation respects them so they respect it. They don’t live in mortal fear of being fired en mass because some “leader” hasn’t made his or her numbers. Imagine an economy made up of such organisations.” (www.mintzberg.org)

There is a clear invitation to shift from “one man show” to a “one team show”. In other words, we need no one super star but a galaxy of super stars. I have been sub-consciously promoting this at the Postgraduate Institute of Management, and now I am more convinced when I hear the inspirational ideas from Mintzberg in a similar fashion.

In creating the communityship experience in a workplace, managers have a vital role to play. Mintzberg highlights management as a practice involving art, science and craft. I attempted to reflect more on this and to elaborate further. Figure 1 contains the details.

It is interesting to identify manager as a Poet, Physician and a Plumber, to use three simple metaphors. He/she has to engage in envisioning, exploring and executing. As a Poet, a manager shall create a vision for future, in displaying his/her leadership qualities. As a Physician, he/she can analyse, diagnose, resolve and do many other tasks in exploring a scenario. As a Plumber, he/she can attend to operational issues that need immediate attention, in fixing things and in executing. 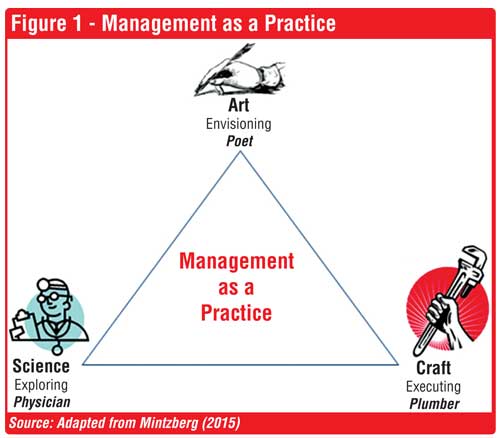 One key feature in communityship is synergy. Synergy is all about working together. It is synchronised energy in action. Stephen Covey, in his bestseller “seven habits of highly effective people”, describes synergy as follows: “Synergy means that the whole is greater than the sum of its parts. It shows that the relationship, which the parts have to each other, is a part in and of itself. It is not only a part, but also the most catalytic, the most empowering, the most unifying, and the most exciting part.”

“Synergy is everywhere in nature”, he goes on further. “If two plants are placed close together for growth, the roots improve the quality of the soil so that both plants will grow better than if they were separated. In short, one plus one equals three or more. The challenge is to apply the principles of creative co-operation, which we learn from nature, in our social interactions…The essence of synergy is to value differences – to respect them, to build on strengths, to compensate for weaknesses”. There is much food for thought indeed.

“Probably we never fully credit the interdependence of wild creatures, and their cognisance of the affairs of their own kind”, so said Mary Austin, a renowned American author. The way geese fly in “V” shape and the way wolves run as a flock are just two prominent examples.

Symbiosis as the basis

Synergy we see in nature is associated with the complex term symbiosis. It is close and often long-term interaction between two or more different biological species. In other words, a close prolonged association between two or more different organisms of different species that may benefit each member. Way back in 1877, Albert Bernhard Frank used the word symbiosis to describe the mutualistic relationship in lichens. It is also described as the living together of two dissimilar organisms, as in mutualism, commensalism, or parasitism.

The term, “symbiotic relationship” is often used in the area of sociology. The word symbiosis has first been used to describe people living together in a community.  It is, in fact, a true adaptation from the biological meaning of “living together of unlike organisms”.

As we saw, synergy is associated with working together. Teams and groups are often interchangeably used to describe a set of people working together. In perusing through the literature of Organisational Behaviour, veterans like Stephen Robbins and Fred Luthans have identified a group as a set of two or more individuals interacting and interdependent with each other in achieving a common objective. A team is one step ahead. I would simplify a team as a group with synergy.

We can get many examples from the field of sports.  Let’s look at Cricket, where the next 20 -20 World Cup tournament is looming large. A Cricket team is effective if it is consistently winning. What are the contributing factors for team effectiveness? I would propose four Cs in line with Stephen Robins’s recommendations. They are, combination, composition, context and conduct.

Combination refers to work design. Whether the team members are having a set of specified tasks with needed autonomy to carry them out is important. Composition is about variety and diversity in a team representing all needed fronts. Context is the needed climate of trust together with encouraging leadership that should be provided. Conduct is the means to an end with a set of performers having clarity and commitment. HR professionals together with their functional colleagues have a key role to play in ensuring the above four Cs for team effectiveness.

Let’s zoom the lens more towards the HR professionals. I witnessed an illustrious evening when the association of HR Professionals (HRP) organised the vibrant event of “shift 2020” last week, in relation to National Human Capital Management (HCM) awards. I observed that it was in collaboration with the National Human Resource Development Council (NHRDC) and the Society of Human Resource Management (SHRM). In the meantime, IPM is planning to have the National Human Resource Conference in June 2017.  There will be a Human Capital Summit this year as well. We started a dialogue between IPM and HRP to engage in common initiatives such as Corporate Social Responsibility (CSR) projects. These are all current local examples of communityship.

As I mentioned in the beginning, the Asia Pacific Federation of Human Resource Management (APFHRM) is the network of human resources and people management associations’ representative countries in the Asia Pacific region. The countries that form the federation are Australia, Bangladesh, Fiji, Hong Kong, India, Japan, Malaysia, New Zealand, Papua New Guinea, Philippines, Singapore, Sri Lanka, Taiwan, Thailand and Vietnam. It promotes communityship in networking together. It is also an active branch of the World Federation of People Management Associations (WFPMA). I saw the untapped potential of it in uplifting the HR profession in the true spirit of communityship.

Communityship can be viewed as a way the east and west meet together. Its practical nature and productive features should motivate us to embrace it as a sure fire way of achieving sustained results. Sri Lankan managers and HR professionals in particular, should relate, reflect and reinforce how they act, react and interact in fostering communityship. It requires commuting and communicating with commitment.