Home / Columnists/ Who can fathom the Mangala Sutra?

Who can fathom the Mangala Sutra? 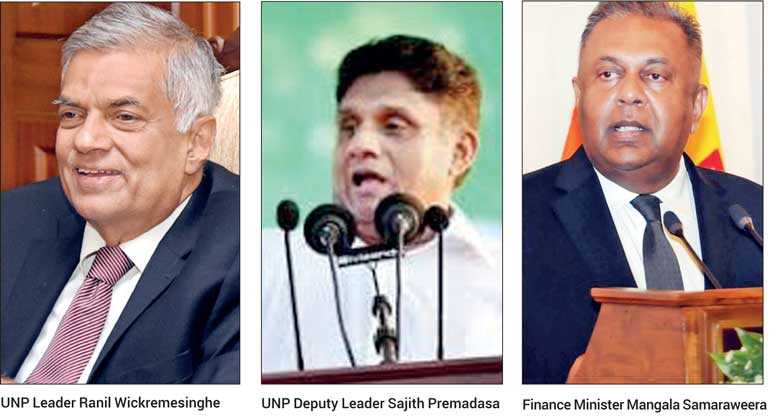 Try to find the hidden. This is like a kid’s mystery-finding adventure. Is it merely the attempt by some younger ministers to get to the top quicker, coming under the wing of a leader closer to them in age? Is it the frustration on the part of some plotters who have been obstructed in an attempt to make ill-gotten money?

There are rumours about one of these ministers having had mysterious money come into a private account from Saudi Arabia. Is it a surreptitious operation of some of those of the former regime who have been dodging court in great style? And, of course, one cannot miss the old allegation about Mr. Maharajah paying others to eradicate Ranil Wickremesinghe. To be sure, one never knows; maybe one day we will know. Hope that day of enlightenment isn’t too long away. In terms of the country, it is important to know.

In a recent piece of mine, I viewed this current episode as the final blow of the counter revolutionary forces. Despite unanticipated tribulations and the absence of parliamentary numbers Ranil Wickremesinghe and his team has achieved a lot toward the Yahapalanaya promise in the revolution that took place in 2015. It is plain mean to deny all that.

The Government is also unmistakably on the path of bringing in the desired structural change in our economy from an import-dependent one to an export-oriented one. Goodwill among the global leaders had been restored and with that came a gradual removal of barriers to our exports like GSP Plus and fish exports. Our tourism and economy began looking up despite the debt backlog. Tourism boomed until the Easter attack.

Ranil Wickremesinghe’s embedded values of secularism, anti-racism, genuine reconciliation and modernism had been playing out very well in the political landscape of our island. As a personage this man may be foxy; but that is a requirement for leadership in politics.

However, have you ever observed Ranil exhibiting hate toward even his political opponents? To President Sirisena who has openly vilified Wickremesinghe? Even to the ones inside the UNP who are hell-bent on ousting him? Honestly, I am not exhibiting an emotional affinity to Wickremesinghe. I am writing out of observed empirical events. It doesn’t matter what we say so long as what we say is thus substantiated by empirical fact. Conversely, any accusation not borne out of evidence must be dismissed.

Ranil Wickremesinghe is a good and humane leader – a man of class and calibre who must be protected from the dirty plotters around him. He stands as one of the few dying remnants of leaders above the mass of crude and greedy parliamentarians that Sri Lanka has, unfortunately, had to bear. You shove him away, and you only encourage the evil men and women to overwhelm our parliament. Bad money has a way of putting out the good.

Well, this shoving away is what seems taking place within the ranks of the very party that Wickremesinghe had shielded and led to victory after about two decades of debilitating years for the Grand Old Party. The laughable irony is that his internal critics keep telling us, hypocritically, that for many years Wickremesinghe could only be in Opposition.

The plucky cyber news site, Lanka E News, that has stupidly been banned by in the island by a stupid President, says that that destruction of Ranil Wickremesinghe is being done on the lines of a Mangala Sutra. The reference is to Finance Minister Mangala Samaraweera. Mangala has shown a strong penchant to be a kingmaker and now he is busy trying to make Sajith Premadasa king.

Mangala should be ashamed to remain in his vital portfolio while plotting all the while against the Prime Minister. So should the other plotters like Harsha De Silva, Eran Wickramaratne and the Sajith adulant, Ajith Perera. These guys seem to be busy all day doing what they should not do and avoiding their ministerial duties. Only Sri Lanka can tolerate this state of affairs. Ranil, for one, is biding his time until these nincompoops piss out with the wearing away of time.

Sajith Premadasa is only the instrument of these conspirators. Sajith should realise that one day, given he is in power, such conspiracies can assail him as well. Why I say Sajith is an instrument is because the Minister of Housing has not achieved anything out of the ordinary all through his years of being a minister.

For one thing, Sajith has been stuck to a narrow tunnel area, which is the Ministry of Housing. He hasn’t, consequently, had the opportunity of learning and demonstrating any skills in navigating the vicissitudes of choice-making. In a tunnel there are no choices; but only a given straightjacket to move on.

Here, at housing, what has he to do? Get treasury money allocated and off he goes getting a contractor to build. No government in the world has made a dent in housing this way. The young minister is even disregarding the fact that with a growing population and limited available land, building single-storey units is ill-advised. Besides, it all means a serious opportunity -cost in more crucial areas like health, education and infrastructure.

As a contrast, see what Patali Champika Ranawaka is doing in his Ministry of Megapolis. Patali is also building houses but his model isn’t a drain on the treasury or economy. There is a return in the way of repayment.

Patali has now set out on using our old canal systems in Colombo to improve public transport. This project will also contribute to tourism. During Dutch times these canals had been built just for transport and cargo. The kind of work Patali does entails knotty decisions and skills of optimisation. While Gota merely decorated Colombo, Patali is adding to the nation’s worth.

On the other hand Sajith is focused on populist measures like building 1,135 chaityas and daham pasal. These constitute the old style politics of yesteryear that are inimical to our economy. Prompted by Dr. Harsha, Sajith now talks of Keynesian economics. Even the Wickremesinghe Government uses Keynesian economics when appropriate.

Is youth an issue?

Of course Sajith Premadasa is young. But Ranil Wickremesinghe is 70 years and younger than Mahinda Rajapaksa. Mahathir Muhammed built Malaysia when he was in his early seventies. Ranil Wickremesinghe still has a lot to contribute to our economy and society. His vast experience, his global contacts, goodwill among all communities, his strong focus on the economy – are all very important.

Much development has already been achieved during the last four years by way of his Gamperaliya and Private Enterprise Sri Lanka. Ranil’s attempt to emergise the length and breadth of the island with the spirit of entrepreneurship is a step in the right direction.

With more numbers in Parliament and another term, Ranil Wickremesinghe will deliver. Sajith Premadasa should extend his learning time a little longer and assist the Leader to modernise Lanka and make it prosperous. Developing the economy is the precondition to our society’s survival; its neglect will harbour unbelievable calamity and dysfunction in all areas of social life.

(The writer can be reached via sjturaus@optusnet.com.au.)