Home / Columnists/ When the sleeper wakes, the Sri Lankan version

When the sleeper wakes, the Sri Lankan version 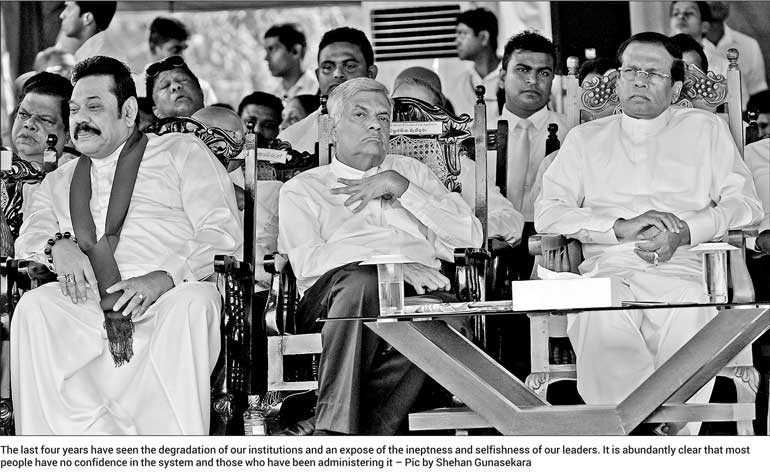 ‘The Sleeper Awakes’ (1910) is a dystopian science fiction novel by English writer H.G. Wells, about a man who sleeps for 203 years, waking up in a completely transformed London where he has become the richest man in the world. The main character awakes to see his dreams realised, and the future revealed to him in all its horrors and malformations.

Sri Lanka may not qualify for a H.G. Well’s dystopian society with its imaginary dehumanising and unpleasantness, although the utopian society that our political leadership wishes us to believe that Sri Lanka is and which we all know now it isn’t, makes us think whether we are closer to being a dystopian society.

While political leaders, in their own self-interests, have led ordinary Tamils, and now, the Muslims to suffer and be dehumanised in numerous ways, as were the Sinhala community especially during our colonial past, the community unrest we experience in open as well as in not so open ways, shows varying degrees of dehumanising going by the utterances of some religious leaders.

It is all the more galling when Buddhist religious leaders espouse causes that are violent in approach, whether verbally violent or physically violent. As the majority community in the country, Buddhists have even more of a responsibility to promote non-violent, tolerant humanitarianism if they wish to call themselves Buddhists.

What is being said is that none of these can be addressed through verbal and physical violence and that these issues can and should only be addressed through discussion, debate and where necessary, compromise, and very importantly, paraphrasing George Orwell, as equals and not one community being more equal than others.

In an excellent TV program ‘Compass’ shown on Australian ABC TV on the situation in Sri Lanka, a Buddhist Monk and a young Muslim man says very succinctly and tellingly, that the issue or the reason for the state of unease in Sri Lanka is not because of the religions and their philosophies, but because of the failings of individuals who call themselves Buddhists or Muslims or Christians. How true!

What Sri Lanka has lacked is leadership, both from political leaders and religious leaders, to sense the building of unease amongst communities and to take steps in advance to prevent molehills becoming mountains of discord and violence.

In some ways ours is a dystopian society with its not so imaginary dehumanising and unpleasantness. When human beings are not treated as equals, there is dehumanising of one group by others. We cannot honestly say we have treated everyone as equals.

The political leadership of the country shows every sign of awakening from a deep sleep. Besides this they also show signs of dementia. Their idea of a utopianism blew up on their faces on that fateful Easter Sunday.

They had forsaken the security of the country for their personal agendas. For four years, they had mismanaged the economy and they had paid only lip service to reconciliation by having stage performances as evidence of reconciliation. They allowed Islamist extremism to spread and take hold of sections of the moderate mainstream Muslim population.

The Buddhist institution which has a wide reach through thousands of Buddhist temples and Buddhist monks were in a slumber although their reach could have sensed the direction the country was going. No effort was taken to initiate inter community discussions. Life in temples was too good to have any distractions.

Some say that the dementia ridden President now blames the 19th Amendment he vociferously supported, as the reason for all ills in the country. He now says having two leaders governing the country has been the bane of the country. The country was warned by the former President that a bull and a buffalo cannot plough a paddy field.

The President forgets that had he not taken up the presidency of the SLFP soon after his election as the President of the country and he stuck to his undertaking that he will be a one-term President for all Sri Lankans, he would have been respected and believed. Instead he led a government within a government and if there is anyone to blame for the mess that the country is in today, he has to bear responsibility as the number one person who has created this mess.

We have a Prime Minister who seems to be closer to foreign interests in Sri Lanka than the interests of Sri Lankans. Many analysts seem to be saying that he is the driver of the Millennium agreement and the SOFA agreement, both of which would give a licence for the USA to walk in with their troops, and their war machinery. None other than the Defence Secretary of Sri Lanka said he cannot give a guarantee that foreign military boots will not land in Sri Lanka. This is the uncertain environment the Prime Minister has introduced to Sri Lanka.

There is only one possible reason why these two leaders have done this, and still wants power. It is their self-interest ahead of the country’s interest. Politicians like many other human beings with all their fallibilities will have self-interest in their minds to propel them forward. The concern they show towards others is often very superficial and driven by self-interest and not genuine concern for others. A better politician would of course find a balance between the two unlike our two leaders who have only shown self-interest and selfishness.

A society devoid of selfishness is certainly difficult to imagine. But a society that glorifies selfishness can be described only as base and ignominious. Civil society and religious leaders must challenge such a society, not with an idea of denying human nature, but to confront the distorted view of it. What needs to be promoted is engagement, discussion and debate, and where needed, compromise.

Politicians are now gripped by a fever, election fever. The symptoms that emerge from hibernation when the begging bowls are out to collect votes are now increasingly visible. These symptoms have been seen by the voters since 1948, and they have regularly been hoodwinked by the bowl carriers.

Now, security is compromised, a path is created for a foreign power to gain a military hold in the country, and yet, the voters are likely to place their votes in the same begging bowls. People will get what they deserve if they do not value their vote and demand better value for their vote.

The governing party has now corned us between by three powers, the current super power, the emerging super power and the regional super power. They have made sure Sri Lankans will forget who they are and were, and look towards an uncertain future and an uncertain identity.

What has been the case for centuries is that culturally, Sri Lanka has been a Sinhala Buddhist country. At least predominantly so. This doesn’t translate to this community being Buddhists in the way Buddha philosophised. A cultural identity is fashioned by history and while culture too changes over time, it is difficult to, and probably not wise, to change who you are intrinsically. Although predominantly Sinhala Buddhist, our culture has been enriched by others like the Christian and Muslim cultures.

Unfortunately, some Government leaders seem to think otherwise most likely because of their ignorance of our identity and our cultural roots. They fail to see that we are capable of taking what is good from modernism, especially technical modernism, and rejecting what is not and alien to our culture.

This Government has been a chartering a course to embrace modernism without any regard to our culture. They fail to see that modernism without a firm cultural foundation would lead us to materialism, self-centredness and individualism rather than collectivism. A rich society is where everyone in a society looks after each other and not where a person’s worth is measured in terms how materially rich a person is.

One can argue that the regime that was ousted in 2015 had deeper roots to our culture than the regime that took over. True we have not had a Mandela to recognise that we are rich culturally because of our unique mosaic of many cultures although Sinhala Buddhist culture is at the centre of that mosaic.

In 2019, voters have to think carefully whether they would elect a president and thereafter a government that wishes to move us towards an uncertain future where the foundations of culture will be challenged and possibly distorted and eventually destroyed.

The last four years have seen the degradation of our institutions and an expose of the ineptness and selfishness of our leaders. It is abundantly clear that most people have no confidence in the system and those who have been administering it. This is a dangerous development for the country and more of the same would lead us to an abyss from which we may not be able to come out.

The only way to prevent this is by at least attempting to renew some degree of confidence in the system, both the presidency, the prime ministership and the Parliament, and the quality of parliamentarians, and the aspirants to these offices, and indeed those who elect aspirants, have to demand and demonstrate change. Not just change, but accountable change.

As this writer mentioned in an earlier article, if such changes are not done, it will not be long before the Parliament ceases to exist and governance is taken over by others with a new model that is not democratic. The relatively short tryst with democracy would then be a historical record for the Mahavamsa.