I enjoyed watching the first 3D Sinhala movie last week. It is ‘Vijayaba Kollaya’ directed by Emeritus Professor Sunil Ariyarathne. It happened to be the last screenplay written by late Dr. Tissa Abeysekara. The story is based on a classical novel by a veteran author W.A. de Silva. This column is not entirely a cinematic review of the movie but a reflection of the relevance to current realities from a keen viewer’s point of view.

The British film pioneer William Friese-Greene heralded a new era in the late 1890s with his patent for a three-dimensional (3D) film process. It is essentially adding a depth to the already existing length and width. Despite high cost and more advanced technological requirements, the 3D movies increasingly became popular thanks to Disney and other high-end global film producers. Now, it has entered the Sinhala cinema with ‘Vijayaba Kollaya’.

The plot in essence

The term ‘Vijayaba Kollaya’ can be interpreted as ‘dethroning’ of King Vijabahu by his angry sons, namely Bhuvanekabahu (later Bhuvanekabahu VII of Kotte), Pararajasingha (later Raigam Bandara) and Mayadunne (later Mayadunne of Sitawaka). When they were released after a long imprisonment by their own father (influenced by his later-found young wife, Queen Kiravella, who virtually gave all orders), a strange series of events started to occur.

Instead of mending fences, she planned a conspiracy to kill the three sons to ensure the kingship to her own son, Deva Rajasinghe. Having discovered the sinister move from Deva Rajasinghe himself, the three angry sons go berserk in destroying the palace after killing their own father. This reverberates the dire consequences of a violent emotional reaction.

In such a backdrop, a love triangle involving three fictional characters created by the author W.A. Silva occupies the centre stage. As observed by Professor Ariyarathne, ‘way back in 1938, W.A. Silva has beautifully combined the history and fiction in creating his most successful novel’. Neelamani, Nayanananda and Asanga show us the beauty of sacrificial love in a memorable and meaningful manner.

In my view, the unfolding of the impactful story of this three-dimensional movie, can be viewed from three distinct dimensions. I would call them, intimate relationships dimension, invasive expansion dimension and inspiring leadership dimension. Let’s discuss the details.

When reflecting on Nilamani’s association with Nanananda and Asanga, two eligible war veterans waiting for her heart, the ancient Greek terms ‘eros’ and ‘agape’ came to my mind. Eros is self-centred love towards someone with a desire to possess, acquire or to gain pleasure. In contrast, agape is self-giving love with a willingness to sacrifice one’s own desires. The entangled affair between a beautiful daughter of a powerful minister of the Kotte Kingdom, a military commander who was promised that she would be given to him in marriage and the newly found spy who entered the Kotte kingdom.

An inspiring leader does not take advantage of his power and his status by forcing others to comply. He/she rather tries to convince them. This element distinguishes a new breed of leadership most clearly from traditional, authoritarian models. The absence of it among the opportunistic Portuguese commanders who were exploiting the given exposure is vividly shown in the movie

The world of literature contains many stories involving a woman with two eligible men. W.A. Silva has created a new meaning to such a tradition by addition of a historical perspective where Asanga and Nanayanda both convert from eros to agape in respecting and protecting the pledge given to one another for taking care of Neelamani.

The way Prof. Ariyarathna has craftily directed the movie in bringing this triangle affair to the centre stage may appear to curtail the unfolding of a true historic story involving the invasion of the Portuguese, in depth. Yet, it is a choice to offer impactful entertainment which has a significant commercial value.

The movie also highlights the unity among Sinhalese and Muslims in then Sri Lanka in the wake of the Portuguese invasion. Hamidumma of Islamic origin, the attractive ‘slave’ assistant of the Portuguese commander is a role created by the writer, personifying the suffering innocents irrespective of race and religion, who are willing to support one another towards a better future. 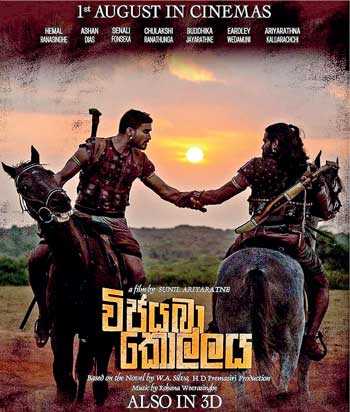 As the way W.A. Silva has set the context, this was the time when the Portuguese had entered Ceylon. As the story goes, in 1505 a Portuguese fleet commanded by Lourenco de Almeida was blown into Colombo by adverse winds. Almeida received a friendly audience from the king of Kotte, Vira Parakrama Bahu, and was favourably impressed with the commercial and strategic value of the island. The Portuguese soon returned and established a regular and formal contact with Kotte. In 1518 they were permitted to build a fort at Colombo and were given trading concessions.

During this time, the trade in the Indian Ocean was dominated by Arab, Indian, Malay, and Chinese merchants, who together used various seafaring craft to transport a spectrum of cargo, from spices to elephants. In the early 16th century a new force, in the form of Portuguese ships with mounted guns, arrived in the ocean. These vessels, with their firepower and capacity for high speeds, helped implement a policy of control that began to undermine the region’s long-standing, relatively open trade competition.

As the movie vividly portrays, the Catholic priests who came with the Portuguese, resorted to innocent religious practices in a non-violent manner, crosses in their hand. In contrast, Portuguese soldiers led by ambitious, pleasure-seeking and ruthless commanders, create distress among Sri Lankans with swords in their hand. It was a case of crosses prompting inner peace and swords instigating violence moving in two different directions. The priests took the side of the suffering Sinhalese prisoners instead of bowing down to injustice by their military colleagues.

Bhuvanaika Bahu, the eldest son of King Viyayabahu ruled Kotte whilst his two brothers, set up independent kingdoms at Sitawake and Rayigama. Mayadunne, the king of Sitawake, was an ambitious and able ruler who sought to expand his frontiers at the expense of his brother at Kotte. Bhuvanaika Bahu could not resist the temptation of seeking Portuguese assistance, and the Portuguese were eager to help him. The more he was pressed by Mayadunne, the greater was his reliance on Portuguese reinforcement. Such a context, gave the Portuguese a huge opportunity to establish their territories in Sri Lanka.

The never-ending hunger for power and the desire to grab it either by hook or by crook appears to have a significant presence in the annals of Sri Lankan history. Seeking assistance of a foreign force unaware of their vested interests and to suffer consequently as a result of it also has been a regular phenomenon in Sri Lanka.

The movie meaningfully portrays the definite ills of a weak ruler influenced by a dominated spouse and confused by the multiple advice of a misaligned set of ministers. The fall of the Kotte kingdom was the sad result of such a sorry state. The absence of required leadership in the struggling king and the presence of authentic leadership among the upcoming youngsters such as Nanayanada and Asanga was very evident in the movie.

Chanakya, the famous author of Arthashastra wrote, in the 4th century BC as follows: 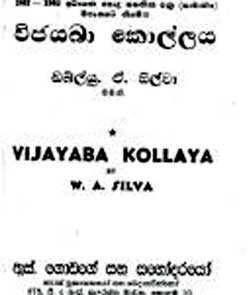 The complete absence of such an approach is visible in the vistas of the movie with more laggards than leaders appearing to dominate. The duel between Asanga, the Lankan commander and the La Sarda, the Portuguese commander is dramatically and impactfully presented in the movie upholding the value of mutual respect demonstrated by Asanga. Instead of killing his rival while asleep, he wakes him up and invites for a duel, where he succeeds after a tight fight.

An inspiring leader does not take advantage of his power and his status by forcing others to comply. He/she rather tries to convince them. This element distinguishes a new breed of leadership most clearly from traditional, authoritarian models. The absence of it among the opportunistic Portuguese commanders who were exploiting the given exposure is vividly shown in the movie.

Are we showing our passion through committed action towards the upliftment of our nation, at least in small actions? Are we electing the right persons to the revered positions or lamenting on the repercussions later? Are we also contributing to the looting of our motherland by opportunistic politicians in all fronts?

Loads of food for thought from a timely release of a memorable meaningful movie.