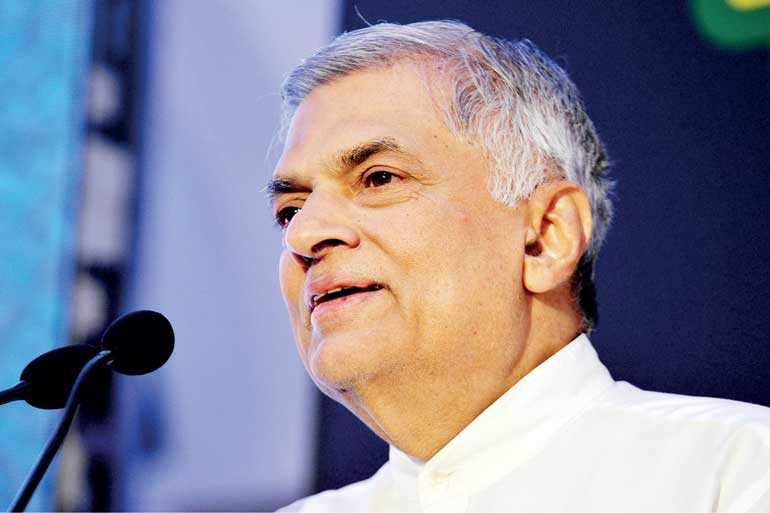 Sri Lanka’s Consumer Confidence Index has hit an all-time low of 36, the lowest in the last one-and-a-half years – Pic by Shehan Gunasekara 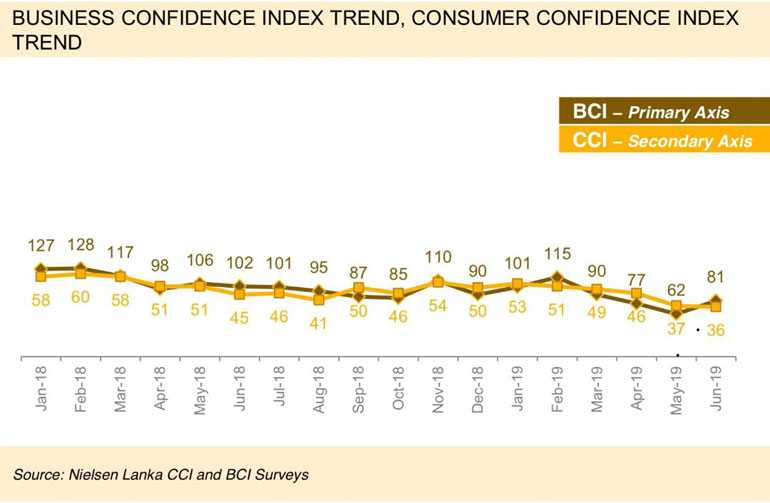 Whilst many of us believed in the Yahapalana regime and decided to serve the country, when we look back it’s sad to say that what we feel is that that the sacrifice we made was in vain.

The last four years have been a disaster when it comes to living the spirit of governance. Starting from the Central Bank bond scam to the AG’s revelation last Thursday that was discussed at the COPE meeting in Parliament on the Water Board and Sathosa, these are just the tip of the iceberg.

As we look back we find that the promise that the Prime Minister set for the country economically in 2015 has not materialised. I still remember the famous Harvard Economic Development Summit at Cinnamon Grand where my teacher from Harvard, Ricardo Haussmann, addressed the business community and the PM stated that he would make this economy the most vibrant in SouthAsia.

Unfortunately we are reeling after four years with a disastrous performance of 3% before the disaster in April and behind India, Pakistan and Bangladesh. It is estimated that Q22019 might be at minus growth and the year will end at 2.6% growth as per the latest ADB forecasts.

I still remember the words of George Soros at the Harvard Economic Forum, when he said: “Your sweet spot in the economy is tourism.” When the diagnostic was done on Sri Lanka’stourism industry, the key issue highlighted was the need to build a strong positioning in the global traveller.

The research revealed that the awareness of the product was at a low 4% globally. However, even after five years the ‘global communication campaign’ has not taken off ground which is unfortunate given that almost Rs. 6 billion remains idling in the bank accounts of Sri Lanka Tourism.

This is only just one of the key economic strategies that has not been implemented, which has caused severe ramifications to the industry. The last straw was when the private sector of the tourism sector took a decision not to support the Government agenda to drive a ‘push strategy’ of staging road shows in Europe. In simple words the industry emphasised the need of the hour was a ‘pull strategy’ initiative like a global media campaign similar to Maldives, Malaysia and Thailand.

It’s time that brand Ranil Wickremesinghe understands that he has failed drive the $93 billion economy. Data reveals that the proposed relief measures adopted post the Easter attacks have also not worked though many commitments were communicated immediately after 21April.

Some speculate that the manner in which the crisis was managed further aggravated the situation rather than neutralising it. This has resulted in the latest Consumer Confidence Index released by Nielsen hitting an all-time low of 36(the lowest in the last 36 months) whilst the Business Confidence Index has also hit a low index of 81 as at end June.

If we do a reality check of a Sri Lankan consumer purchasing(prior to the Easter attack) as per Nielsen data, things were very rough at the household end. The overall household volume consumption had dropped the whole year of 2017 and in 2018 upto Q3(for almost two years in a row).

However, in the last three to four months things have once again become very challenging to the Sri Lankan household with even consumption of milk powder contracting, which means a typical household is bound to take a drastic decision at the next elections. Sadly, brand Ranil Wickremesinghe continues talk about the ‘marvellouseconomy’ he has built, which is why the younger fold of ministers wants him out of the system at the next Presidential Election as he has no ground sense.

If we do a deep dive in the sentiments politically, under the leadership of brand Ranil Wickremesinghe, we see that the brand UNP has lost almost 30 elections. Even as we speak today, we see an outcry from the public and the very party that he leads but he continues to evade the issue and use all the political plug-ins to stay in his seat. In my view, the weakness is not in the leader but the board of management of the party which cannot bring about change.

We have seen in corporate management where chairmen liketo stay on even after reaching retirement age, but the board takes the bold move and makes the change for the betterment of the organisation, staff and the consumers they service. This logic holds true even in politics.

An Artificial Intelligence( AI) company which specialises in perception diagnostics recently found (prior to the appointment of brand Gota)the sentimentin the market is that brand Mahinda is getting traction, discovered drivers were dynamic Leadership, being political savvy, nationally being proud and good for economic growth.

If we term this ‘Wave 1’ it will be interesting to check the consumer reaction to ‘Wave 2’ given that in the last one month there have been key changes in the political landscape. But the overall thinking will remain on the loss of credibility to brand Ranil. This must be a reality check that ‘UNP Inc’ must take into account in the forward planning.

If I am to pick one key point of this study, it is how brand Sirisena has a positive traction on the driver ‘International respect and recognition’. When a qualitative dip stick was done, what was revealed was that given that brand Sirisena is travelling overseas and meeting the likes of the Heads of State in Singapore, Cambodia, India, etc., the overall perception is that on the attribute‘International respect and recognition,’ he was gaining ground over brand Ranil. This is a clear indication of how a brand loses the very equity that one has, due to not understanding the market vibes. A classic case study of how not to manage a brand.

If I track back, when the Yahapalana Government was voted in in 2015 and the economic leadership of the country was given to brand Ranil Wickremesinghe, the management of the economy for whatever reason was so bad together with the bond scam that the Government lost credibility by 10February 2018.

The voter decided to bring back the former regime which was the reality check that brand Ranil Wickremesinghe and the team was faced with. Even today we see a strong contingent of 55 members writing and signing that they have found an alternate leader to drive the brand UNP at the next election but he continues to refrain from taking this feedback. This is a classic example of the downfall of a brand in the business world.

Ideally what the management of the UNP should have done was to change the leadership of the ministries in 2018 with new faces and created a new wave in the marketplace. But the leadership did not take any action and todaywe see the brand crashing in the country.

If the UNP managementwas proactive with the changes made to the running of the economy post 2018, Provincial Council Elections could have been staged over a one-year period and voter pulse checked. With this feedback they could have made more changes and driven the brand UNP to face 2020 Presidential Elections.

Given the absence of such strategic thinking and weak leadership, today brand UNP is fighting to sit in power, whilst virtually giving the voter the mandate to elect a competitor party –the SLPP and a brand that has delivered brand Gota.

In marketing we call this marketing myopia; we see how the consumer requirement has changed but an organisation continues to hold on to the product. By this time the consumer has started to move to a competitor product. This feeling has come to the true hardcoresolus users of brand UNP. But the organisation continues to move in the same direction. This will be the greatest case study for corporate Sri Lanka in the near future.

(The writer can be contacted on rohantha.athukorala1@gmail.com. The thoughts are strictly his personal views and not those of the organisations he works for in Sri Lanka and the Asian region.)