Home / Columnists/ There was a yearning for someone different as president: We got one!

There was a yearning for someone different as president: We got one! 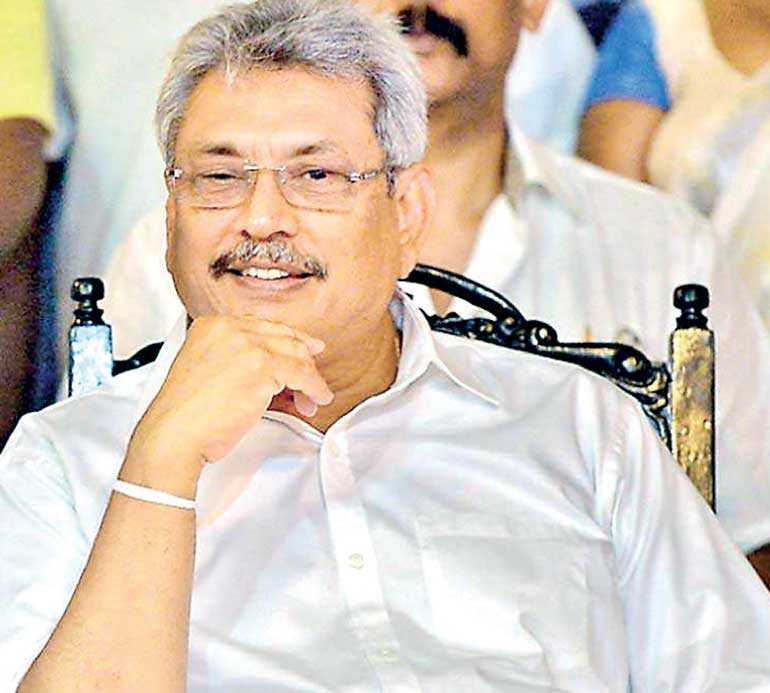 Gotabaya is someone different

There was certainly amongst the educated middle class a yearning for a non-political person as president. It was in response to this perceived need that a number of non-politicians threw their hats into the ring at the recent election.

It was this yearning that lead to the rumours and hope that Dhammika Perera would enter the fray. None of the others who were “different” made any headway in the election, but we certainly got someone different in Gotabaya Rajapaksa. He is the complete non-politician.

He never contested any election, Local Government or Parliamentary, and therefore was never a member of a Pradeshiya Sabha, never a Member of Parliament or a Minister. He was never boiled and seasoned in the cauldron of our parliamentary politics.

Our parliamentary politics is dominated by a culture created a by a large number who were nobodies (including 94 members of Parliament who do not have O/Levels) seeking to become somebodies through the political route.

All of them in Parliament are not like that. There are many who really wanted to help our country to grow and prosper and were somebodies before they dipped their feet in politics. When they end up in the cauldron of parliamentary politics, through osmosis they too absorb the bad culture and also find that they could not find the space and opportunity to contribute to development.

Gotabaya Rajapaksa has not been touched by any of this.

What experience does Gotabaya Rajapaksa bring to the job?

A rich experience that includes a career in the Army, which included fighting in the frontline of the war, a master’s degree, an Information Technology qualification and the experience of working and living in the USA. With that experience he took on the role of Defence Secretary. He led the successful campaign carried out by the three forces and won the war.

The splashes of good execution seen in recent years was when the task was left to non-politicians.

Gotabaya Rajapaksa comes to the job of president with a much, much richer experience than any of the previous presidents.

Gotabaya Rajapaksa comes to the job of president with a much, much richer experience than any of the previous presidents

The Government needs a minister of finance who can successfully blend together the three key requirements, namely to improve the economic fundamentals of the country, to improve the wellbeing of the people, and to provide support and stimulate the activities that provide economic growth

What we expect from the new president

We hope the President will not be a puppet. The dictionary definition of a puppet is a person, whose acts are controlled by a hidden puppet master who pulls the strings. A long time ago I read a children’s story where the puppets got fed up with the puppet master pulling the strings and they became real people and beat up the puppet master.

Gotabaya Rajapaksa was elected with the support of a political alliance. He could not have become president without this political engine behind him. Will he have the courage to say: “I won the election for you, now let me get on and implement the plans I promised to implement”? And also say to the politicians: “You have the important role that only you can do and that is to clean our politics of all the dirt it is submerged in at present.”

He is on a tandem bicycle which is one ridden by two people. He should say to his partner on the tandem: “I will create a great economy, could you please create a great new political culture, and then we would have jointly created a great country?”

The real challenge isn’t to think up great ideas. That’s easy, that was done and the election was won.

That was the easy part. The real challenge is to implement the projects to deliver what was promised. If promises are not fulfilled expeditiously all the enthusiasm for the new president will begin to fray and the opposition will scream with delight. It will not be easy to deliver what was promised as it has been very difficult to implement projects.

Many years ago I was asked to head a unit to implement donor funded projects, as at the time these projects were in disarray. They were way behind schedule and donors were complaining.

At the time Mahathir, the Prime Minister of Malaysia, had a great reputation for executing a large number of mega projects that was transforming his country. Through a high-level contact I was able to get a good glimpse at how he was doing it.

He had a special unit to implement projects. It occupied an office next to his and he was in regular contact with this unit as he gave top priority to implementing his projects. I was able to spend a fascinating day at this unit trying to understand his great success with projects. Armed with what I learnt I set up our own project implementation unit. It proved to be very successful in implementing our projects.

What I learnt from Prime Minister Mahathir’s project development unit was that it had two vital components. A very good process driven project management unit and a very small ministerial team which must include the President. Every project (even building a bridge) has an interface with a number of ministries which have to provide approvals or facilities, neither happens quickly and is a main cause of delays. The project development unit must have the political support that can give a kick in the butt to those causing delays.

My project implementation unit was successful because it had both the key components of the Malaysian model.

The most important role

The Government needs a minister of finance who can successfully blend together the three key requirements, namely to improve the economic fundamentals of the country, to improve the wellbeing of the people, and to provide support and stimulate the activities that provide economic growth.

It is a tough task to balance this equation with the funds available. It is difficult to identify many people who can perform this role and I see non from the ranks of elected Members of Parliament. The answer perhaps is to look at the nominated MP route for a candidate. I can think of one with years of experience of managing the country’s finances, and who knows well the corridors of the Treasury building!