The real cost of dengue 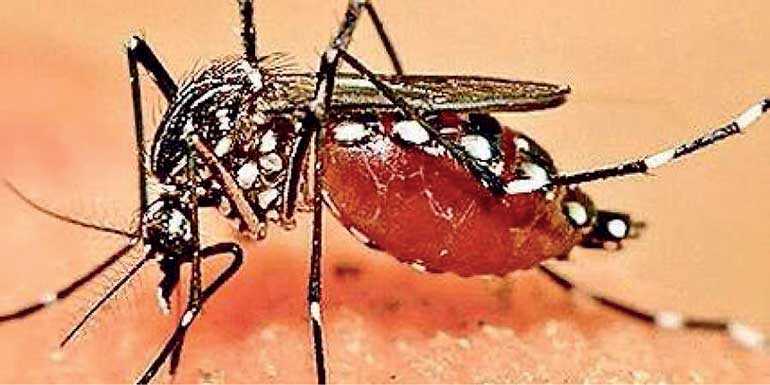 Up to September 2019, the Epidemiology Unit of the Ministry of Health listed 46,896 of reported dengue cases from all over the island

Rainy season not only brings much-needed water to Sri Lanka, but also an increase in mosquitoes and thus: dengue. As in many southern countries, Sri Lanka faces the challenge of controlling this mosquito-borne disease. Up to September 2019, the Epidemiology Unit of the Ministry of Health listed 46,896 of reported dengue cases from all over the island. In 2018 51,659 cases were reported for the entire year. 47% of dengue cases this year were reported for the Western Region with a peak so far in July and August.

Globally the World Mosquito Program reports of 390 million dengue infections each year with 96 million clinically apparent infections; 500,000 cases developing into dengue haemorrhagic fever and an estimated 25,000 deaths annually worldwide. 40% of the world’s population in more than 100 countries are at risk of contracting dengue. The WHO ranks dengue fever as the most critical mosquito-borne viral disease in the world which is rapidly spreading. It had a 30-fold increase in global incidence over the past 50 years. The most significant epidemics have occurred in Southeast Asia, Americas and Western Pacific. And this is not even the full picture.

Leading Sri Lankan dengue doctors explain that out of 10 patients having a dengue infection, roughly only three show symptoms. Which implies that many Sri Lankans would receive a positive result, conducting a blood test without being aware that they already had a dengue infection. This means that those asymptomatic patients are as well nurseries for dengue mosquitos to spread the virus further as such patients would go on with their daily life, go to work and socialise. Finally, this means that there is an unknown number of actual dengue infections worldwide.

Comparing numbers for malaria for 2017 WHO finds an estimated 219 million cases in 87 countries with a death toll of 435,000. Africa carries the major share of the burden with 92% of malaria cases and 93% of deaths. Despite that malaria is preventable and curable! There is medicine which can be taken prophylactic as well as to cure the disease. The entire world is aware of malaria and large funding budgets are raised to find solutions to eradicate the disease.

What about dengue? Looking at the numbers globally and for Sri Lanka, recently efforts to combat dengue had been on the rise. Earlier it was said that dengue didn’t get enough attention because globally the actual numbers of deaths per year were not high enough for pharma industries to invest in long year trials to develop vaccines and or medicines. Since the past few years however several vaccines are in the pipeline and other solutions are explored as well.

The first dengue vaccine was developed by Sanofi Pasteur and licensed in December 2015. It is now approved in 20 countries for persons between 9-45 years of age. However vaccines are not a simple solution. In 2017 research results showed that those persons being vaccinated who didn’t have a natural dengue infection before had a higher risk of developing severe dengue symptoms when subsequently being naturally infected later on by mosquito bite.

At the same time the Sri Lankan dengue focused research institutes and experts are active in exploring possibilities to fight dengue as well. Whoever has met dengue specialists in Sri Lanka knows their limitless efforts to find solutions to this health challenge. Frustration lies within the fact that once dengue is on the rise, it is discussed publicly, measures are promised and the urgency of focusing on this health threat is highlighted. However after infections decrease, these activities reside as fast as they have erupted before. Yes, dengue is not necessarily fatal (neither is malaria). Nevertheless, it causes a burden to society in many ways.

What about the associated social and environmental cost, not speaking of economic cost related to dengue? First, for those living in high prevalence areas bite prevention includes a daily routine. It is responsible for not being able to enjoy the outside, for using chemicals for fumigation/mosquito control as well as repellents and for dealing with fear of a family member being bitten (especially children and elderly).

For all those who get caught and experience dengue fever (in this regard not including those who are asymptomatic), such patients not only go through the symptoms of the disease during its outbreak, however can face long-term health consequences. Depending on the degree and severity of the dengue infection, patients usually suffer between three to six months from symptoms linked to post dengue fatigue. Where most dengue survivors manage to get back to their normal health status, there are multiple cases where patients experience changes in their health which last for the rest of their lives.

Now looking at the economic cost. Those patients suffering from dengue are not able to work or keep up their daily routine for a significant time. They are not able to perform in their jobs as they would normally do, they cannot contribute to family and social life as they would normally do and some might even lose their jobs because of the incapability to perform up to standard. Official statistics do not capture these indirect costs of the disease.

Dengue experts in Sri Lanka explain that one reason for the death toll is that many patients experiencing symptoms are not able to come to hospital and be warded because they cannot leave their family, they have small children to look after, they would lose their employment if they are vacant for a significant time and similar reasons. Thus they try and manage the illness at home and despite that once the fever and pains subside, there is still the danger of inner bleedings once platelets counts drop.

Often patients feel much better after the first few days of the dengue fever, however this does not mean they are out of the danger zone. As liquid control is one crucial factor for surviving dengue, not being able to focus on recovery but being caught up in work and family life, does not allow for this measure. Rest is needed, and this for months. Who can afford that? In a

world which is faster and more competitive each day?

So what to do? With the necessary attention dengue experts and institutions can receive the needed funding and support to investigate in sustainable solutions. Also, legislation and regulations have to be set in place to create an environment which supports long-lasting solutions. Experts agree that mosquito control, and prevention of mosquito bites are still the best solutions to prevent sickness and epidemic. Mosquitos can be controlled at larvae stage or adult stage. Best as one can imagine would be to not let them breed at all.

In this regard studies highlight the direct connection between poor solid waste management, landfills and increase in number of disease carrying mosquitoes. Mismanaged waste creates perfect breeding sites for the dengue mosquito which only needs a small cup of water for its larvae to develop. In urban areas mosquitoes breed in drains, cesspits, cesspools, gutters, stocked tyres and in consumer waste such as i.e. yoghurt cups. Therefore diseases such as dengue are also more prevalent in areas where such breeding sites are easily available. The increased construction sites in the Colombo area also provide plenty of opportunities for rainwater to collect to facilitate small stagnant water pools for mosquitoes to breed.

A study of Vidyavathy K on the dengue situation in India concludes: “Lack of adequate housing, water supply, sanitation and solid waste management facilities, as well as knowledge, attitudes and practice of the people are the major factors responsible for the proliferation of mosquitoes in the urban environment”. Experts from India in another article mention that ‘solid waste management is a crucial issue’ and ‘the cause of deaths (due to vector borne diseases) is waste and lack of waste management’.

One example for a solution, however with a sad end has been the Continental Plan for the Eradication of the Ae. Aegypti mosquito between 1947 and 1970 which included the control of the mosquito by means of fumigation and the elimination of mosquito foci by destroying abandoned containers. With this program many countries in America were able to eradicate this type of mosquito completely. It is said that as a result of these efforts only one single dengue virus appeared to remain in circulation by the mid of the 20th century.

Decades after these efforts the Aedes Aegypti mosquito returned in these countries due to deterioration of the eradication program over time and the lesser importance it was given to it politically. Finally, the mosquito expanded geographically with subsequent outbreaks of different dengue serotypes in several countries in this region.

What makes dengue so epidemic is also the fact that the virus can be transmitted from human to human via the mosquito. Past research has found out that if a natural bacteria called ‘Wolbachia’ is present in the mosquito (as it is in up to 60% of insect species, including some mosquitos) the virus cannot be transmitted to another human. By introducing these bacteria into the Aedes aegypti mosquito scientists found a reduced ability to transmit viruses to people.

The World Mosquito Program has already released such mosquitos hoping they would breed with wild mosquitos and spread the Wolbachia bacteria, in total reducing the ability of the mosquito to spread viruses such as dengue to other humans. Their research has shown that in areas of high prevalence of mosquitos with Wolbachia, there has not been any dengue outbreaks.

The organisation reports of also having partnered with the Sri Lankan Ministry of Health in July 2017, where the country faced a severe increase of dengue cases. In 2019 the project was supposed to release the first Wolbachia mosquitos in the area of Colombo. This solution seems low cost, long term and sustainable. Outcomes will show the effectiveness of this project for Sri Lanka where hope remains that such solutions will bring relief to the country and to its people.