Home / Columnists/ The meaning of our slogans

The meaning of our slogans 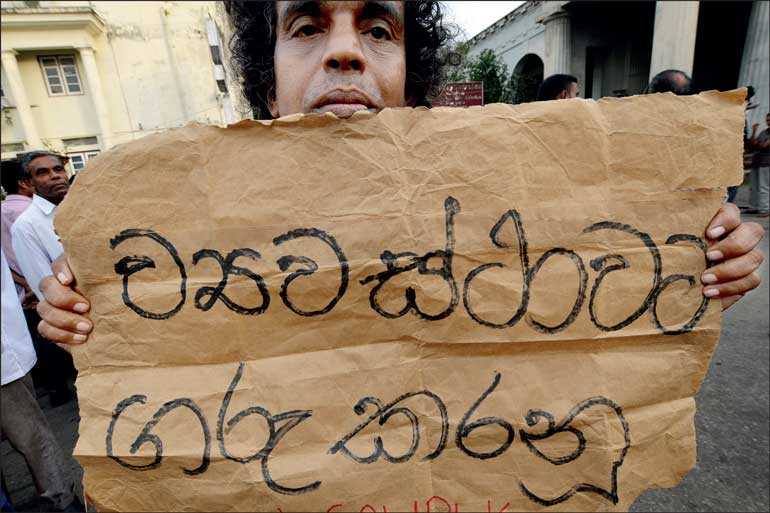 If slogans can deliver, Sri Lanka would be paradise on earth by now – Pic by Shehan Gunasekara

“Work for something because it is good, not just because it stands a chance to succeed” – Vaclav Havel, Czechoslovakian Statesman

Sri Lankans undoubtedly are inclined towards slogans, and the time of elections is the high season. They appear everywhere; on walls, bus stands, huge boulders, vehicles and even on the garments worn by the campaigners.

Usually we are given somewhat pedestrian catchphrases/exhortations like ‘grow trees, the country will grow’, ‘a

roof over your head, food in your stomach’ ‘one for all, all for one’. When elections are announced the temperature is raised several degrees, urgent, strident slogans are introduced; ‘protect your vote, keep dictators out’, ‘throw corruption out of the country, put the corrupters in jail,’ ‘be patriotic, have just one passport’.

If slogans can deliver, Sri Lanka would be paradise on earth by now. We all know that slogans are just hot air; those who can, don’t need slogans; those who cannot, can only shout slogans. Floundering in a bog of failure, inventing slogans has become our remedy. Where there is no true achievement, make believe would do, words create a myth and the myth overwhelms realism.

However imperfect its depiction, every slogan represents an ideology, an interpretation of an idea. The other day I saw a three-wheeler with the message “Che Guevara wants you to rebel” painted on the rear body of the vehicle. He got in front of me, over-taking on the wrong side, and then suddenly blinked his right signal light indicating a right turn but stopped on the left hand side of the road to pick up a customer. While passing him I had a momentary glimpse of the driver; the bearer of a dangerous road culture. An immature unkempt face gaped at me, the “rebellion” on three wheels was happening.

Che Guevara (1928-67) was an incandescent star that streaked across the revolutionary firmament in the mid -20th Century, a brilliant life, eventually consumed by its own fire, as it were. Of Spanish/Irish descent, Che was born in Argentina. In addition to being a revolutionary of the uppermost quality, he was a physician, writer and a poet (among the poets Guevara admired were Pablo Neruda, John Keats, Antonio Machado and Walt Whitman).

Obviously a man of global relevance, his name is particularly etched in the annals of the Cuban revolution, in which, with Fidel Castro, he played a decisive role. Jean Paul Sartre the famous French existentialist philosopher, met Guevara in Havana, after the revolution. Such was his impact on the philosopher that Sartre later described Che as “the most complete human being of our time”

Guevara the rebel, lived for the revolution, the Colombo three-wheel driver confirms it. Across disparate race and cultural barriers, the impulse to ‘rebel’ unites two very unlike personalities. Use the word, and you become. But is the meaning of the concept, for Guevara and that three-wheel driver, the same?

Respected Statesman Vaclav Havel (1936-2011), before he became President of Czechoslovakia was a writer, poet and rebel. He played a pivotal role in toppling the entrenched communist regime and became the first President of democratic Czechoslovakia (1989-1992). And then, after the dissolution of the country (the eastern part of the country becoming Slovakia), was elected the first President of the newly formed Czech Republic (1993-2003).

Right through his life Havel was a passionate advocate for humanitarianism, environmentalism, anti-consumerism and civil activism. For his pains Havel was put in jail several times by the communist regime. During his enforced stays in jail he evidently gave much thought to the evils of the system that jailed him. One of the products of his meditations was an essay “The Power of the Powerless”, in which Havel examines the meaning of slogans thus;

“The manager of a fruit and vegetable shop places in his window, among the onions and carrots, the slogan: ‘Workers of the world, Unite!’

Why does he do that? What is he trying to communicate to the world? Is he genuinely enthusiastic about the idea of unity among the workers of the wold? Is his enthusiasm so great that he feels an irrepressible impulse to acquaint the public with his ideals? Has he really given more than a moment’s thought to how such a unification might occur and what it would mean?

Obviously, the greengrocer is indifferent to the semantic content of the slogan on exhibit; he does not put the slogan in this window from any personal desire to acquaint the public with the ideal it expresses. This of course does not mean that his action has no motive or significance at all, or that the slogan communicates nothing to anyone. The slogan is really a sign, and as such it contains a subliminal, but very definite message. Verbally it might be expressed this way:

‘I, the greengrocer XY, live here and I know what I must do. I behave in the manner expected of me. I can be depended upon and am beyond reproach. I am obedient and therefore I have the right to be left alone.’

This message of course has an addressee: it is directed above, to the greengrocer’s superior, and at the same time it is a shield that protects the greengrocer from potential informers. The slogan’s real meaning, therefore, is rooted firmly in the greengrocer’s existence. It reflects his vital interests.

If the greengrocer instead had been instructed to display the slogan ‘I am afraid and therefore unquestioningly obedient’ he would not be nearly as indifferent to its semantics, even though the statement would reflect the truth.

The greengrocer would be embarrassed and ashamed to put such an unequivocal statement of his own degradation in the shop window, and quite naturally so, for he is a human being and thus has a sense of his own dignity.

To overcome this complication, his expression of loyalty must take the form of a sign which, at least on its textual surface, indicates a level of disinterested conviction. It must allow the greengrocer to say ‘what’s wrong with the workers of the world uniting?’

From the land of Kafka, there is a Vaclav Havel.

Who will examine the meanings behind the slogans of Sri Lankan politics?