Home / Columnists/ The great American nation: Quest for the preservation of life, liberty and the pursuit of happiness

The great American nation: Quest for the preservation of life, liberty and the pursuit of happiness 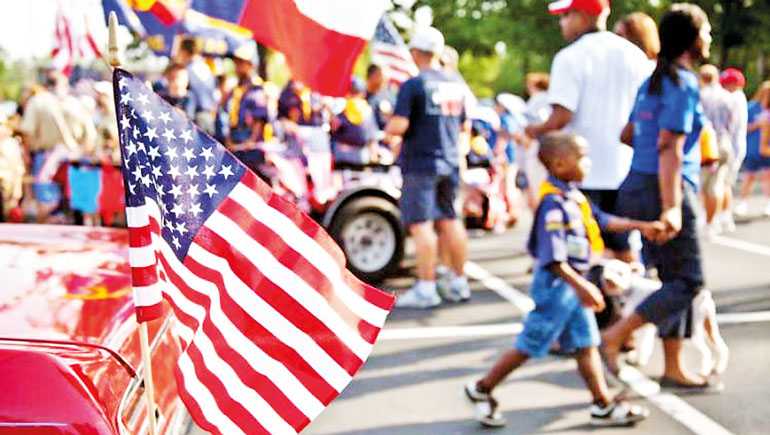 Today, 4 July, Americans celebrate the 243rd Independence Day. This is the most important date in American political, social and cultural history.

The dawn of Independence Day is celebrated with fireworks, parades on the streets with musical bands, barbecues in the garden parties, carnivals for children and families, family reunions and of course each event is opened with a political speeches glorifying the work of the founders and the success of Great American experiment which stood for 243 years unhindered.

America is by far the most powerful economy of the world and it has firmly established itself as a super power not through robbing intellectual property of other nations but through her own efforts. There is absolute rule of law and respect for human rights and civil liberties. The American political experiment is a far cry from the way how her rivals govern their countries. Americans can truly be proud of their political system.

American educational institutions have produced intellectuals and scientists and have earned the plaudits from across the world for the innovation and research outcomes. America has produced the highest number of Nobel laureates and the record is unbeatable with a huge buffer.

One might question as to how the American nation was able to secure such a strong place in the world with a strong armed force with nuclear missiles to defend itself. The only answer to this theory is that American political system backed by the Constitution is unique among nations.

It has strong institutions of democracy that nurture and protect the political system. The rule of law is so sacrosanct that American Supreme Court is the guardian of that branch. It ensures that American citizens are safe from encroachment by the government; it protects privacy, individual rights, press freedom and equal protection of the law.

The American Supreme Court has often upheld the due process of law. The American citizens are therefore safe and secure in their own land because institutions of democracy function within the law.

American Constitution – We, the people

The American Constitution was adopted in 1789 and it has since then revised 27 times in keeping with the demands of the society which had radical economic and social upheavals. The Constitution upholds the Montesquieu’s doctrine of the separation of power where each branch of the government is assured of its own autonomy and protection from being encroached by the other branch of the government.

Since 1789, thousands of cases have been adjudicated by the Supreme Court and there is an enormous corpus of American jurisprudence which fill a major area of any law library. One cannot ignore the American jurisprudence when it comes to studying public law. Many American judicial precedents and celebrated cases are cited in the cases decided by other countries. America has set the legal precedents in constitution law.

Federalism – how the States governments function

American federalism emerged as a result of the deteriorating relationship between American colonists and British Imperial Government in the new world. The factionalism exhibited by the Dutch, French and Spanish influences over their own territories in Northern America caused major political issues.

However the British emerged as a dominant power. British influence and the loosely fashioned new political territories led to a form of shared powers and authorities among various governments.

The province of Quebec in Canada, for instance, is a French dominated area yet comes under British influence and under the British North America Act. However these political arrangements did not last much longer when colonists rebelled against British interests and this led them to seek independence from British domination.

The federal system works perfectly well because American political system is bound by the provisions of the constitution. Hence all political activists conduct themselves within the confines of the law. The power given to each state is clearly demarcated so it is in essence a question of managing the political power of the state vis-à-vis Federal power. There is no room for advocating a separate state as no citizen would support such a cause when they have, arguably, the best drafted constitution of the world, which guarantees free expression of thought, freedom of association and pursuit of happiness.

The American Constitution does provide a ‘Supremacy Clause’ and emphasises the fact that the federal government holds ultimate power. The Constitution vide Article VI, Clause 2, known as the Supremacy Clause, stipulates that the American Constitution and the laws of the central government "shall be the supreme Law of the Land". What this does mean is that states cannot abuse their reserved or concurrent powers in an effort to thwart or circumvent national policies.

Every citizen is bound by an oath to defend the American Constitution. The American jurisprudence has affirmed that national government power overrides any conflicting state action.  The powers granted to the States includes regulation of intrastate commerce, conduct elections, to provide for public heal, safety, welfare and morals, run local governments, to ratify amendments to the federal constitution, to establish a state militia which is sort of a police force.

The powers of state is also circumscribed by prohibitions in the constitution which includes, inter alia, taxation of export import trade, to mind coins/currency, enter into treaties with foreign governments, impairments to obligations of contracts, To abridge the  privileges or immunities of citizens or deny due process and equal protection of the laws.

It would be pertinent to reflect upon the competency of the Supreme Court to resolve the questions of law when it comes to interpretation of the constitution where legal arguments would clash on the exact demarcation of boundaries of the state and the Federal law. There have been some landmark court cases which defined the American Governments power.

In Marbury v. Madison, a celebrated case during the early 1800, the Supreme Court clearly enunciated the principle of judicial review, which has since become an important part of the checks and balances in the American system of government. Under the leadership Chief Justice John Marshall, the Supreme Court asserted supremacy of the Supreme Court when it comes to the interpretation of legislation.

The second landmark case on Federal system was the McCulloch v Maryland decided in 1819 also under the Chief Justice Marshall. The case involved both the ‘necessary and proper clause’ and the supremacy clause. When the State of Maryland imposed a tax on the Baltimore branch of the Second Bank of the United States, James McCulloch, the Chief Cashier, declined to pay the tax. The national government had no alternative and petitioned the American Supreme Court.

The argument was whether Congress had the authority under the Constitution's necessary and proper clause to charter and contribute capital to the Second Bank of the United States. There was yet another constitutional hiatus involved. If the bank was constitutional, could John Marshall, Chief Justice of the United States Supreme Court from 1801 to 1835, be instrumental in establishing the supremacy of the national state tax? In other words, was a state action that conflicted with a national government action invalid under the supremacy clause? Chief Justice Marshall pointed out that no provision in the Constitution grants the national government the ‘expressed power’ to form a national bank.

Americans managed to send three astronauts to the moon on 20 July 1969, culminating and triumphing in the race to moon which had also been followed by America’s arch rival, the Soviet Union. The moon landing is considered a giant step in the advancement of science and technology which America leads even today.

Neil Armstrong was able to live that American dream and the American flag is still on the moon. China landed its spacecraft on 3 January 2019. When Malaysian Airlines MH370 disappeared, China with all its mighty naval power could not trace the aircraft. Was it a major lacuna in its submarine hunting capacity and capability? Till today the Flight MH370 is missing. China seems to have given up the mission to find the MH370.

The American Government still contributes the largest budget for science and technology.

It had made mammoth progress in this area. The Science Daily says, “The American business sector is by far the largest performer of R&D in the US, accounting for 72% of the $ 495 billion total in 2015. For several years, the annual rise in business R&D performance has accounted for most of the growth in overall US R&D. Of the three main types of R&D – basic research, applied research and experimental development businesses lead in both applied research (58% of $ 97 billion total) and experimental development (88% of $ 314 billion total). Higher education institutions continue to perform the largest share of US basic research (49 percent of $83 billion total).” Ref. https://www.sciencedaily.com/releases/2018/01/180124113951.htm.

TheScienceMag.org says that the President Trump authorised the biggest ever funding for science research and signed into law a $ 1.3 trillion spending package. This figure is nowhere near the research budget of China. The American universities produce the most number of research journals/reviews covering all aspects of education from humanities, social science and astronomy to space research, engineering and computer science.

Americans still lead the literature on business studies and have developed case studies based on their business models which are followed by business schools in other countries. Peter Drucker, a management ideologue and a philosopher and Philip Kotler, who is known as the ‘Father of the Modern Marketing,’ are some of the popular names. Since there is freedom and opportunities, the American citizens have all the liberty to pursue their education. Most Americans find their racial roots in Europe.

Boeing has secured the highest number of orders for aircrafts in 2018.  Airbus A380 production has been stopped by Airbus Industries due to lack of orders from airlines.  Forbes magazine says that the innovative Boeing 777-X with folding wings might have forced A380 production halt. The American stories are ever-evolving and cannot be concluded.

(The writer is a political commentator and holds an LL.M in International Commercial Law and a Post Graduate Diploma in Diplomacy and World Affairs.)