The SLFP’s crisis is a crisis of ideological identity. It is also an existential crisis. The SLFP is divided into two tendencies, a Minority (‘Menshevik’) faction with 44 seats in Parliament, led by President Sirisena, not all of them elected, and a Majority (‘Bolshevik’) faction with over 50 seats, led by former President Rajapaksa. 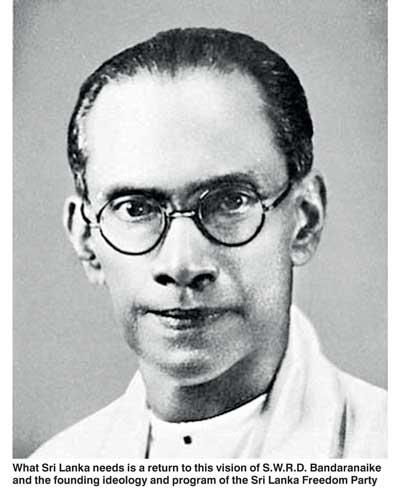 The ‘official’ SLFP (Minority) is a junior partner of its traditional foe the UNP, and therefore has an ideological vacuum within it. It does not know what it stands for and what it is.

The unofficial SLFP (Majority) aka SLPP or Pohottuwa, has a definite ideology which is not quite that of the mainstream centre-left SLFP tradition, but increasingly that of the various ultra-nationalist pressure groups that operated alongside the party since 1955 (Eksath Bhikshu Peramuna), through 1970 (Nath Amarakone-V.W. Kularatne pushed through Standardisation which created the Tamil youth insurgency), into the late 1980s (JVP-DJV).

S.W.R.D. Bandaranaike was a liberal, a pluralist and a populist-nationalist. His was a national liberalism and a liberal nationalism. More correctly, it was the former at certain times and the latter at certain others. It was not his populist nationalism that was the problem. It was when that nationalism was provisionally subsumed under a monolingual, mono-ethnic, mono-religious program.

I hardly ever agree with Prof. Nalin de Silva, and we’ve always regarded each other with cordial detestation and been rightly regarded by others as bitter ideological foes, but he was quite right in his periodisation of S.W.R.D. Bandaranaike’s evolution. He classifies SWRD–dismissively, as I do not—as a Westernised liberal and social democrat right up to 1955, when at the time of the Buddha Jayanthi, the Sinhala Buddhist civil society organisations, including the Buddhist monks pushed through the agenda of Sinhala Only.

Nalin de Silva identifies that as the moment of S.W.R.D.’s pivot towards and embrace of the Dharmapala movement; a pivot and re-set which resulted in 1956 taking the shape it did. For my part I regard that as precisely the moment he took a great leap backwards, and an unnecessary one because the back of the UNP had been broken by the Hartal of August 1953, the Galle Face kick-off meeting of which SWRD had chaired. However I agree with Nalin de Silva that until that point SWRD and the SLFP were well within the parameters of liberalism and social democracy, rather than Sinhala Buddhist nationalism.

Bandaranaike’s nationalism and his liberalism were perfectly compatible with his definition of the SLFP, both at its founding and in his 1957 speech at Peradeniya, as “social democratic”, as with his chairing of the Hartal rally which heralded an unarmed popular uprising (in which the SLFP did not participate) against the UNP.

SWRD’s nationalism and liberalism were also compatible with his first election manifesto which called for “the national languages” (plural) to be “state languages”, just as they were compatible with the Bandaranaike-Chelvanayakam pact and its agenda of Tamil autonomy within the quintessentially unitary state bequeathed by the Soulbury Constitution.

Ironically, both Chandika’s brother Anura and her husband Vijaya were truer to SWRD’s political ideology than she has become. Anura was a liberal and moderate nationalist (as he proved in July 1987 and 2004), unlike CBK who has abandoned any kind of nationalism for the embrace of Ranil’s cosmopolitanism. Vijaya was a populist and a social democrat, while CBK has abandoned any kind of populism and/or social democracy in favour of Ranil and Mangala’s neoliberal globalism and free market fundamentalism.

It is typical of Chandrika that the UNP leader she was always the most hostile to, Premadasa, was precisely the one who was most sympathetic to her father and closest to his ideology (indeed my father, who knew them both, wrote of Premadasa as “the SLFP within the UNP”) while the UNP leader she is allied to always positioned himself on the pro-US/UK, free market far right of the centre-right party. Ranil Wickremesinghe (who as a young politician was utterly unmoved by the April 1971 youth insurrection) formally integrated the UNP, as no previous leader did, with the US Republicans and UK Conservatives, joining and becoming a Vice-President of the global organisation founded by George W Bush, the International Democratic Union.

The Budget presented by CBK’s chief ally Mangala Samaraweera envisages the dismantling of three pieces of progressive agrarian legislation (the Paddy Lands Act of 1958 and the Land Reforms of 1972 and 1975), the removal of the land ceilings, and the opening up to large-scale holdings by multinationals, all of which would bury the most progressive laws of her father’s and mother’s governments of 1956 and 1970, which CBK herself identified so closely with as the Director, Land Reform Commission and Chairperson, Janavasa Commission.

The chief economic advisor and ideologue of the Ranil-Mangala duo is Prof Razeen Sally, a member of the ultra-right Mont Pelerin Society founded by and dedicated to the ideals of FW Hayek! One wonders what CBK’s old professor and intellectual hero Charles Bettelheim would have said about all this!

Under Chandrika’s tutelage, the official SLFP has returned to the B-C Pact and gone beyond it, back to SWRD’s exploratory 1925 articles as a young returnee from the UK, on federalism, but having junked the larger progressive paradigm of SWRD, the SLFP and 1956: national independence and sovereignty, populism, social welfare, a strong state sector, and the Spirit of Bandung i.e. Third Worldism with a tilt to Russia and China.

This is a pity because President Sirisena would have been a natural legatee of the 1956+1957 (B-C Pact) heritage of SWRD. He has been forced to turn away from 1951-1956 because Chandrika has pushed the party away from the Middle Path into a role of tailing behind the UNP on the pro-Western Right Path, i.e. the wrong path, the path of the UNP which her father SWRD broke away from and won his greatest victory over in 1956, which her mother repeated in 1970.

In the growing Oppositional space, Mahinda Rajapaksa, the Rajapaksa family, and Prof. G.L. Peiris would naturally have been a strong, organic centre-left or liberal-nationalist moderate centre, but they have been pulled to or pushed by the neo-nationalist populist Right, due to the ideological gravitational effect or osmosis of the Buddhist clergy and civil society as well as Diaspora pressure groups. Thanks to Yahapalana’s Geneva 2015 accountability, appeasement as reconciliation and the drive for a new non-unitary Constitution, there is a second edition unfolding of ‘The Revolt in the Temple’ that DC Wijewardena wrote of in the 1950s.

Instead of tracing a path back to the wrong turning of 1955 and taking the correct one back to the founding document of the SLFP in 1951, the party’s first election manifesto of 1952, and SWRD’s attempt to return to it in 1957-58 with the B-C Pact and the Kurunegala sessions, Chandrika and the Lankan liberals have tried to put the clock back to pre-1951, before SWRD’s rupture with the UNP, and bring the SLFP back under the dominance of the UNP—and that too a UNP far to the right of UNP tradition and closest to the disastrous UNP profile of 1956.

The official SLFP stands for ‘1957 without 1956’. Under the influence of CBK, who has betrayed both the ‘B’ and the ‘K’ of her dual surnames; the political ideals of her father, mother, husband and brother; the heritages of Bandaranaike and Kumaratunga, the ‘official’ SLFP has capitulated to the supinely pro-western foreign policy and economic neoliberalism of the comprador UNP. CBK has become the Countess of Compradorefication of the SLFP.

Meanwhile, in an inside-out, upside-down mirror image, the anti-government SLPP as well as the ‘outrider’ Eliya and Viyath Maga formations, stand for ‘1956 without 1957’. They have deviated from the Middle Path of moderate nationalism and social democracy and succumbed to a discourse of nativist neo-conservatism, fighting shy of defending President Rajapaksa’s heavily-documented stand on devolution, and criticising devolution/power-sharing (“balaya bedeema”) as such, not only beyond 13A or in its federalist form. An Eliya spokesperson recently resurrected the antiquarian ‘Sinhala/Tamil place-names’ discourse of extreme Sinhala nationalism. The dominant ideological undercurrent is a return to pre-1987, a latent rejection of the Indo-Lanka Accord and the 13th amendment, and a lurch away from pragmatism in the dangerous direction of nativism, Sinhala exceptionalism, unilateralism and neo-isolationism.

Who then will stand for ‘1956 plus 1957’, the true policy and legacy of SWRD and the SLFP, and the authentic project of a Sri Lankan social democracy inspired by a liberal nationalism, a nationalist liberalism?

What Sri Lanka needs is a return to this vision of S.W.R.D. Bandaranaike and the founding ideology and program of the Sri Lanka Freedom Party, which was an anti-UNP eclectic fusion of the ‘Five Great Forces’ (‘Pancha Maha Balavegaya’) of ideas and ideologies: liberalism, nationalism, pluralism, populism and social democracy. There lies the New Middle Path.