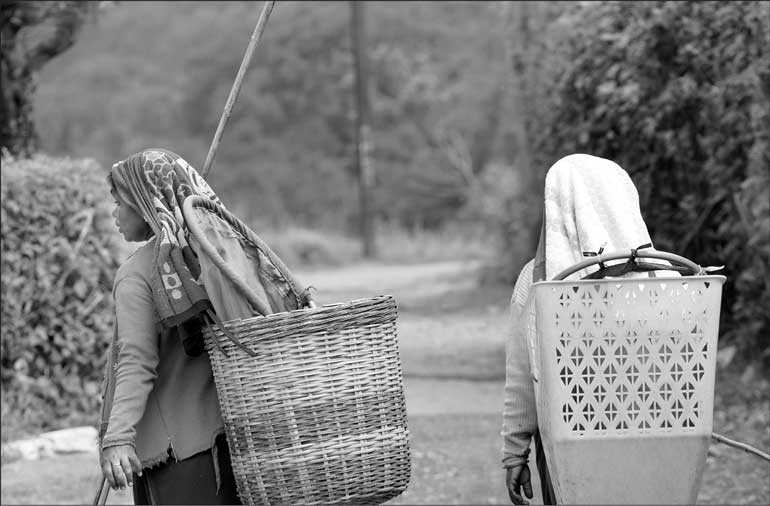 Today, our main commercial crops, tea, rubber and coconut, although not negligible, no longer occupy the dominant position they once held. With evolving economic patterns, newer industries and services have come to the fore – Pic by Shehan Gunasekara

For more than a century, tea has been a major stay of our economy; a primary earner of foreign exchange, an income source for many thousands.

Like all commercial crops organised as labour intensive plantation industries, earnings range from the lavish to the barely subsisting. Thousands of acreages of pristine land in our hill country are carpeted with charmingly laid tea gardens, pleasingly green and immaculate.

These plantations employ many thousands, mainly descendants of labour imported from India more than a century ago. To those who provide the labour, there really are no future prospects, save for continued labour.

Today, our main commercial crops, tea, rubber and coconut, although not negligible, no longer occupy the dominant position they once held. With evolving economic patterns, newer industries and services have come to the fore.

Going by the predominance of the crop, one might think tea is a native plant. That is not so, our plantation industry owes its beginning to the British colonial period, which began for us in 1815.

It is not as if the British occupied the island with the intention of introducing commercial crops. These developed gradually, responding to the demand to make their colonies economically viable. Essentially, the British were traders, the spices and the other produce of the warm climes, starting with sugar, fetched high prices in Europe. Good money could be made by answering the changing global markets.

From the British point of view, the countries they had conquered carried two pluses; plenty of undeveloped lands and a large pool of cheap labour. This was an imperial era, with absolutist kings, hard laws and by today’s standards, scant regard for human rights.  Satisfying the European ‘sweet tooth’ was unsavoury business, the history of the colonial sugar plantations is besmirched with the agony of slavery. (It must however be noted that slavery has a much longer history.)

The period during which Britain began to expand its reach, establish far flung colonies (originally, in competition with other European powers) to the time it indisputably ruled the waves and its eventual retreat from the idea of an Empire (roughly a period spanning from early 16th century to mid-20th century) was an era of accelerated historical transformation, not only in the colonised but more so in the colonial countries.

Rapid industrialisation, and the concomitant developments in other technologies, set in motion a revolutionary period of history. Men began to think differently; institutions and ideas that had remained fixed for centuries were examined anew, the human mind and spirit soared to heights uncharted. Britain that the Pilgrim Fathers left was very different to the Britain of 1948.

Reading on the imperial era I came across some references to the early tea industry which will be of interest to the reader. Although much has been written here about our early days of tea and the pioneering Scottish planters, there is little reference to the end markets in Europe.

The writings on the founding days of the European tea market are revealing for the buyer’s insularity of mind as well as the brazenness of the seller. Some of the promotional stuff could well have come from a snake oil seller, assuring in the brew, a cure for all. That was a different time.

For the purpose of accurate portrayal of the era, I have copied the text as it was.

“But Dutch merchants had been trading with India via the Cape of Good Hope since 1595. By 1596 they had firmly established themselves at Bantam, on the island of Java, from where the first consignment of Chinese tea destined for the European market were shipped in 1606…”

“In particular, what the English consumer liked was to mix his sugar with an orally administered and highly addictive drug, caffeine, supplemented with an inhaled but equally addictive substance, nicotine. In Defoe’s time, tea, coffee, tobacco and sugar were the new, new things. And all of them had to be imported.”

“The first recorded English request for a pot of tea is in a letter dated 27 June 1615 from Mr. R. Wickham, agent to the East India Company on the Japanese island of Hirado, to his colleague Mr. Eaton at Macao, asking him to send on only ‘the best sort of chaw’.’’

“However, it was not until 1658 that the first advertisement appeared in England for what was to become the national drink. It was published in the officially subsidized weekly, mercurius politicus, for the week ending 30 September and offered: ‘That excellent, and by all physicians approved, China drink, called by the chineans, Tcha, by other nations Tay alias Tee…sold at the Sultaness –head, 2 Copee-house in Sweetings Rents by the Royal Exchange, London.”

“At around the same time, the coffee house owner Thomas Garraway published a broadsheet entitled ‘An exact Description of the Growth, Quality and ‘Vertues’ of the Leaf TEA, in which he claimed that it could cure ‘Headache, Stone, Gravel, dropsy, Liptitude Distillations, Scurvy, Sleepiness, Loss of memory, looseness or Griping of the guts, Heavy Dreams and Collick proceeding from the wind.’

‘Taken with Virgin’s Honey instead of Sugar, he assured potential customers, “Tea cleanses the Kidneys and Ureters, & with milk and water it prevents consumption. If you are of corpulent body it ensures good appetite, & if you have a surfeit it is just the thing to give you a gentle vomit.’

“For whatever reason, Charles II’s Portuguese Queen was also a tea-drinker: Edmund Waller’s poem dedicated to her on her birthday praised ‘The Muse’s friend, tea, which does our fancy aid, / Repress those vapours which the head invade,/And keep the palace of the soul serene.’”

“However, it was only in the early 18th Century that tea began to be imported in sufficient quantities –and at sufficiently low prices-to create a mass market. In 1703, the Kent arrived in London with a cargo of 65,000 lbs. of tea, not far off the entire annual importation in previous years. The real breakthrough came when the figure for tea retained for home consumption leapt from an average of under 800,000 lbs, in early 1740s to over 2.5 million lbs between 1746 and 1750. By 1756 the habit was far enough spread to prompt a denunciation in Hanway’s Essay on Tea: ‘the very chambermaids have lost their bloom by drinking tea’ (Samuel Johnson retorted with an ambivalent review, written –as he put it – ‘by a hardened and shameless tea-drinker’)” – Empire-Niall Ferguson.

The story of tea had begun long before it came to Sri Lanka (Ceylon) in or about the mid-19th century. In this small country with a small economy, tea soon became the mainstay. Things evolve, tea though very important, no longer is the dominant player in “Lipton’s Tea Garden”. What happens next to that delightful brew, only the “God of Tea” will know.

Like all commercial crops organised as labour intensive plantation industries, earnings range from the lavish to the barely subsisting. Thousands of acreages of pristine land in our hill country are carpeted with charmingly laid tea gardens, pleasingly green and immaculate. These plantations employ many thousands, mainly descendants of labour imported from India more than a century ago. To those who provide the labour, there really are no future prospects, save for continued labour