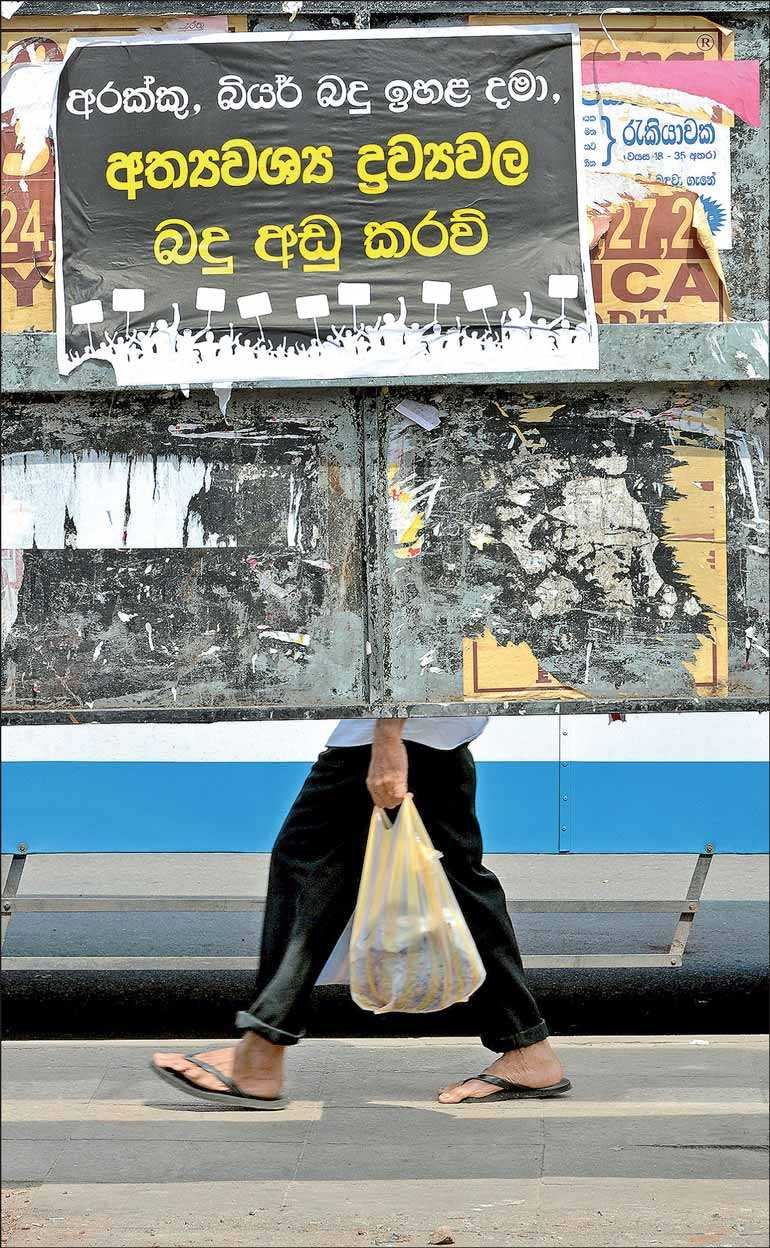 If we are to overcome, we need our technocrats/managerial class in the forefront. By reducing taxation where it affects them directly, the Government has given this segment an opportunity for a better life, the ability to do some serious saving, and to feel that working for their country can be both fulfilling, as well as rewarding – Pic by Shehan Gunasekara

There is no doubt that to the average citizen, the recent reductions in various taxes were indeed good tidings. For those earning a fixed income, the tax burden had become intolerable. The new Government’s tax reductions are aimed at relieving the burden on the middle-classes, ranging from the junior executives, the professionals to the retired. These are social groups whose lifestyles and expectations expose them to high cost utilities. Although relative to the salary structure here, a two hundred thousand (approximately $ 1000) monthly salary may sound impressive, in real terms, a thousand dollars can only provide a basic existence.

No economy functions in splendid isolation. The prices of many of the goods and services we access are determined by their import costs. To rent a standard middle-class three-roomed house, even in the suburbs, you are looking at something like Rs. 50,000 a month, or more. If you go in for a more modern apartment, the monthly rent could easily exceed Rs. 100,000. Our middle-class professional is bound to have a number of electrical appliances in his house; today, a washing machine or an air conditioner are necessities, not luxuries. As a result of the corruption of the power sector by unscrupulous wheeler dealers, he will be paying one of the highest electricity bills in Asia.

Purchasing a car and its maintenance will be a major charge on a salaried person. If he has two school-going children, particularly if they are attending what is referred to as an ‘international school’, education costs for a month could be in the range of Rs. 25000-50,000. Once a month, our middle-class battler may want to treat his family at a restaurant. Even if he chooses a modest place for the occasion, a meal for four will not be this side of Rs. 10,000. All these things, until now, had a high Value Added Tax which was passed on to the consumer.

These mid-level workers are in fact the lifeblood of the economic system. They are the technocrats; managers, designers, implementers, and the supervisors of the nation’s economic activity at a micro level. To equip themselves for professional responsibilities, they have obtained a higher education, besides undergoing training. This learning makes them eligible for migration to countries looking for skilled migrants. But not all look for greener pastures.

Those who remain in the country give their active years to their profession, perhaps earn sufficiently to meet their daily expenses, even to maintain a semblance of bourgeois respectability. But that is about it. At the end of their career, given the mismatch between their earnings and their expenses, it is unlikely that they could have put aside anything much for their retirement. Inflation, together with the gradual depreciation of the rupee, will steadily erode the value of their pension. With aging will come medical costs, eating into the little money they may have put aside by scrimping and saving. In their evening years, they will be made to fall back on their children for support. The cycle of dependency is continued.

The heavy tax burden forced on the people, taxes like the VAT which hit the poor as well as the rich, has a particularly vulgar aspect: the very lawmakers who impose the taxes enjoying a life of ostentatious luxury with that tax money. Not only do they get the most luxurious vehicles for themselves, they travel about in convoys of such vehicles. Often, this privileged travelling mode is extended to their family members as well. No sooner ensconced in office, they also move into plush government bungalows, in the best parts of the city.

In the rarefied atmosphere of high office, they soon reinvent their persona, taking on new roles: deep thinker, intellectual, brilliant strategist, and such like. Taking themselves to be personages of global stature, they begin to travel overseas often, in first class comfort, staying at the most luxurious hotels. For all the tax money spent on these jaunts, we have precious little to show; apparently the country has very few friends in the international world, and have attracted very little investments, we being one of the lowest investment recipients in Asia.

Correcting this dismal scenario is no easy task for a third world country, held down, in addition to bewildering economic problems, by social as well as political conundrums. Tax money is taken from those who worked efficiently and passed on to a palpably inefficient bureaucracy. Very many of the government-run institutions are loss-making, an ever-increasing charge on the tax payer. There is an unfortunate attitude prevailing that a big government equates to a better government.

But an attempt has been made to address one vital area. If we are to overcome, we need our technocrats/managerial class in the forefront. By reducing taxation where it affects them directly, the Government has given this segment an opportunity for a better life, the ability to do some serious saving, and to feel that working for their country can be both fulfilling, as well as rewarding.

It is hoped that by helping these vital elements of our society, the economy itself will be strengthened. Often human factors like recognition, confidence, and contentment have led to economic resurgence. It is difficult to imagine economic success, if recognition or confidence is denied to the technocrats.

About 50 years ago, Singapore began its remarkable odyssey from a Third World to a First World country. Much has been written about this transformation and Lee Kuan Yew, the man primarily associated with Singapore’s breath-taking success. I just give three short quotes from Lee Kuan Yew’s book “From Third World to First”:

“Our policies kept people keen to achieve their best. Monetary stability, a balanced budget, and low taxes encouraged ample investments and high productivity. On top of their high CPF compulsory savings, many have additional voluntary savings …”

“If I have to choose one word to explain why Singapore succeeded, it is “confidence’. This was what made foreign investors site their factories and refineries here. Within days of the oil crisis in October 1973, I decided to give a clear signal to the oil companies that we did not claim any special privileges over the stocks of oil they held in their Singapore refineries. If we blocked export from those stocks, we would have had enough oil for our own consumption for two years, but we would have shown ourselves to be completely undependable.”

“We attracted international financial institutions by abolishing withholding tax on interest income earned by non-resident depositors. All Asian dollar deposits were exempted from statutory liquidity and reserve requirements. By the 1990s, Singapore had become one of the larger financial centres of the world …”

But that is another time, another country, another culture.

Predictably, not everyone welcomed the generous tax concessions. Putting on serious faces, many professed their concern: “Without collecting these taxes, how are we going to balance the Budget and how will we repay our loans?”

Beforehand, many of them had worked with main and might to avoid paying taxes, adopting stratagems bordering on tax evasion. The reduction of taxes has apparently stirred a new public spirit in them now.

In this part of the world, there is a tendency for any initiative, however good, to be dragged into a bog of endless discussion and criticism. Offering no alternative, the critic merely muddies the water, until the initiative is so messed up that it loses its definition as well as its direction. Dispirited, the initiator retreats, while, whatever remains of the initiative is consumed by cunning operatives, like scavengers at a carcass.

In his abovementioned book, Lee Kuan Yew describes a luncheon with Jawaharlal Nehru, the then-Prime Minister of India (1962):

“I was driven to Pandit Jawaharlal Nehru’s home to meet him. It had been the residence of one of the British military commanders - two storeys, wide verandas, spacious grounds beautifully laid out.

For lunch, we were seated at a long table, probably inherited from British times. Each guest had a large silver tray as his dinner plate, and picked what he fancied from a wide array of rice, chapattis, curries, vegetables, meats, fish, pickles, and condiments that were brought to him. What was unusual was that everyone ate with their fingers. Choo and I had no practice at this. While they held their food neatly, and daintily with their fingertips, we rummaged through ours, the gravy reaching up to our knuckles. We felt and looked messy. I was relieved when silver bowls of water with slices of lime came for guests to wash their greasy fingers …”