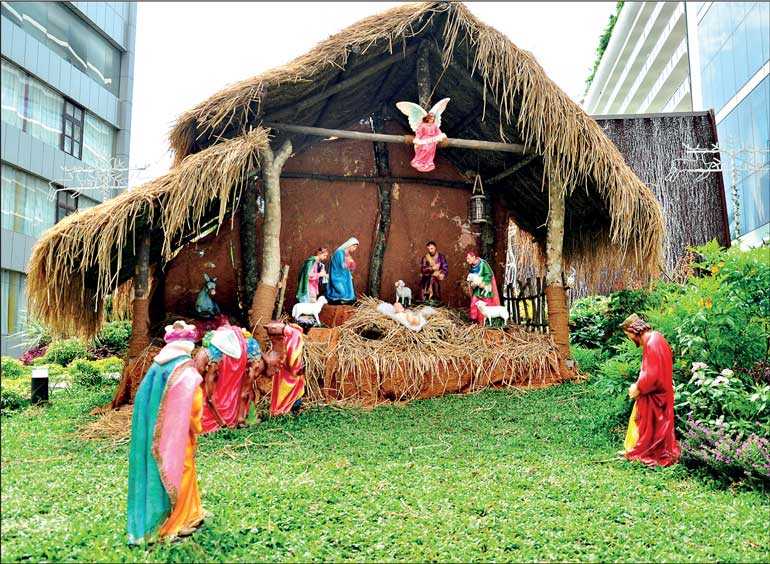 A manger in the little town of Bethlehem became world famous because of Christmas. It is not only a time to relax and refresh, but also to reflect and to reinforce. Despite the overly commercial coverage of Christmas, the true serenity associated with spirituality is still significant. As someone boldly said the other day, Christmas is certainly not Santa’s birthday

Leaders and laggards are much in talk these days in the midst of a political turbulence that ravaged the country. Christmas is approaching with its associated festivities as usual. Apart from the traditional message of peace and harmony, this “festival of light” invites us to enlighten ourselves to relook at the sincerity of our decisions and actions. Let me call my Christmas reflection a tale of two leaders.

A manger in the little town of Bethlehem became world famous because of Christmas. It is not only a time to relax and refresh, but also to reflect and to reinforce. Despite the overly commercial coverage of Christmas, the true serenity associated with spirituality is still significant. As someone boldly said the other day, Christmas is certainly not Santa’s birthday.

Traditionally we associate Christmas with the birth of Jesus Christ, despite the fact that it was a Roman festival of light, subsequently adopted to commemorate the birth of Jesus. It is more symbolic than historical with a high spiritual message. There is a telling invitation for us to be spiritual, in superseding traditional religious boundaries. In doing so, let me focus on a lesser viewed angle of leadership.

Christmas is associated with a “king” and a “king of kings”. A vicious leader and a visionary leader were much in action. One was an adult with all worldly power, and the other one was a child enjoying the heavenly peace. Let me be specific. It is all above Herod the Great and baby Jesus.

I was inspired by a recent speech delivered by Rev. Prof. Aloysious Peiris, a globally-renowned scriptural scholar and the first Catholic Priest in Sri Lanka to obtain a doctorate in Buddhism. He compared Herod with Jesus in identifying their nature and features. Herod the Great was a Roman client king of Judea, famously known for his thirst for power, lust for women and interest in massive construction. He built a “Port City” in Caesarea, and massacred innocent children in order to destroy the threat of a future potential king.

The “king of kings” had all the right to be born in the most prestigious place on earth. Yet, the decision was to be born in a “manger” among animals, in becoming “eco-friendly”. The first visitors were shepherds representing the lowest strata of the society. It reminds me of a popular Christmas Carol “Away in a Manger”, with most-common musical settings are by William J. Kirkpatrick (1895) and James Ramsey Murray (1887).

Away in a manger, no crib for a bed,

The little Lord Jesus laid down his sweet head.

The stars in the bright sky looked down where he lay,

The little Lord Jesus asleep on the hay.

The cattle are lowing, the baby awakes,

But little Lord Jesus, no crying he makes.

I love thee, Lord Jesus! look down from the sky,

And stay by my cradle till morning is nigh.

The contrast among the two leaders are much obvious. Let’s explore further.

A “Serpent” Leader and a “Servant” Leader

As we are much aware, leadership is not about positions and titles, but about decisions and actions. It is essentially a mindset. We look at the leaders at the top but not the “leaders at the tap”.  Servant leadership is perhaps, one of the most ancient forms of leadership, aptly found in all great religious founders.  When you consider the 550 Jathaka stories, more than 50% of the time, Bodhisathva is portrayed as a leader. In some cases, as a one who serve others. In brief, a servant leader is a servant first. The simple motto is service first.

Chanakya, the famous author of Arthashastra, wrote, in the 4th century B.C as follows:

There are passages that highlight the servant dimension of leadership, attributed to Lao-Tzu, who is believed to have lived in China sometime between 570 B.C. and 490 B.C.

Christmas invites us to serve others with love and compassion. It challenges us to leave aside Herod’s “serpent” leadership and embrace Jesus’s “servant” leadership. In order to have reflections and resolutions, I think, there is no better time than this Christmas week. Let that inward journey be a truly meaningful one, in bringing out the authentic leader in you and me

The fascinating point here is that the servant leader appears as a “leader breeder” in developing his/her followers to serve others.

Jesus who washed the feet of his disciples showed the world of his true servant leadership. That’s why we say that those who serve deserve leadership. In contrast Herod the Great was not so great in this perspective, in suppressing others with oppressive force. For me, he was more a “serpent” leader than a servant leader.

Herod was not a Jewish but a Roman king. He had become the ruler of the Jews with Roman help and boasted about being “the emperor’s friend”, dominating the power to entertaining Agrippa, Augustus Caesar’s right-hand man. On top of the gate of the new Temple, a golden eagle was erected, a symbol of Roman power in the heart of the holy city resented by all pious believers. Herod concluded ten marriages, all began with political purposes and probably all ended with profound misery.

King of Slavery vs. a King of Salvation

Herod ruled Judea with fear. He was insecure in actions and inconsistent in decisions. He was a slave to his lust and ended up having a ruined body.  During nearly his whole reign, Herod faced trouble within his own family. Historians say that he had killed his wife, Mariamne, out of jealousy. As the years went by, the whole matter was further complicated by the question of who would replace him on the throne. Like many people with a strong will to power, Herod could not face the idea of losing it.

Three of Herod’s sons were put to death, and his brother “escaped death only by dying.” When Herod finally died, two other sons had some claim to the throne. Augustus finally settled the matter by splitting the inheritance between these two sons and a third one, and not allowing the title of king to any of them.

Jesus in stark contrast was a king of salvation. His message was all about love. It radiates forgiveness and friendship with a faith in a heavenly father. He carried a heavy cross to Golgotha and was the supreme sacrifice for the sake of humanity. He preached of a good shepherd who would carry wounded sheep on his shoulders, as opposed to so-called leaders who go on others’ shoulders.  His leadership was the cross first and then the crown.

If Herod was the ruler of hate, Jesus was the ruler of heart.  Whilst Herod went on a killing rampage, baby Jesus was safe with Joseph and Mary in Egypt. Jesus invited people to turn away from their evil to experience peace, hope and joy.  “A new command I give you: Love one another.” This provides the basis for human relations.

There are a plenty of don’ts from Herod and a bounty of dos from Jesus. It is an invitation for managers to become servant leaders in demonstrating “spirituality” in action. It involves thinking and feeling of interconnectedness. It invites us to move away from being “vicious” in becoming “visionary”.  The essence here is synergy in action, leaving aside differences, in demonstrating what management scholars termed as “spiritual intelligence”.

Spiritual Intelligence should be seen more in practice than in preaching. It applies to business managers and public administrators alike. It reminds me of one of my precious childhood memories in visiting a remarkable personality, and now I know that he was highly spiritually intelligent.

I together with my parents visited Rev. Fr. Mercelline Jayakody, who was at the old Catholic Church of Pilapitiya, Kelaniya. His room had a beautiful scenic view of Kelani River. Perhaps he would have been influenced to write many Sinhala Carols connecting natural beauty of Sri Lanka to nativity of Christ, when he wrote:

(Christmas comes with loads of gifts in rainy December when waters of Mahaweli becomes murky).

Let me conclude with what Rev. Fr. Mercelline Jayakody, aptly hailed as the Priest of the Temple (Pansale Piyathuma), wrote in Sinhala highlighting the social reality of Christmas. My translation of it goes as follows:

When the poor are well fed

When ragged cloths are no more

When your hands are consoled

When sin “goes” to Church.

It is all about being humane, with serving in mind. Christmas invites us to serve others with love and compassion. It challenges us to leave aside Herod’s “serpent” leadership and embrace Jesus’s “servant” leadership. In order to have reflections and resolutions, I think, there is no better time than this Christmas week. Let that inward journey be a truly meaningful one, in bringing out the authentic leader in you and me.