Serenity, synergy and solidarity for Sri Lankans: A post-Vesak pondering 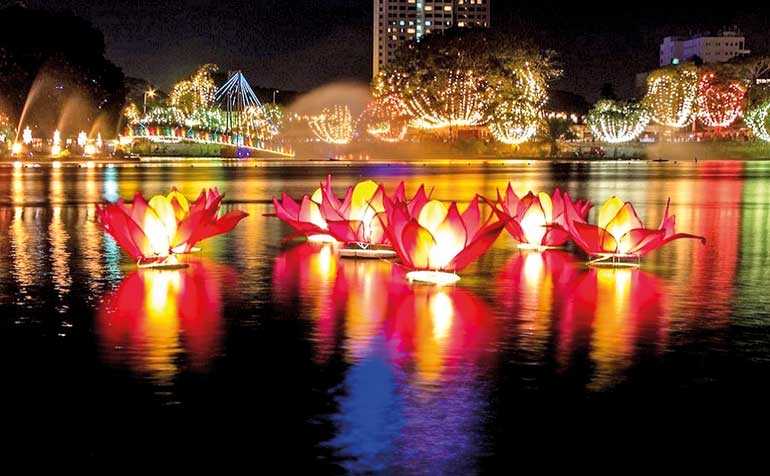 We have just witnessed a different Vesak with less dansals and more devotion. It was an illuminating sign of unity among diversity where Buddhists and non-Buddhists alike joined hands in showing the world what Sri Lanka really is. Despite the sporadic cruelties by extremists from elusive origins, Sri Lankans have begun to show their serenity, synergy and solidarity. Today’s column is a reflection of our resilience and revival, with inherited prospects and pitfalls.

“Our ability to reach unity in diversity will be the beauty and test of our civilisation”, said Mahatma Gandhi. In fact, it is our duty to ensure that beauty of unity in diversity. It is encouraging to see religious clergy coming forward with rare unity despite typical blame games of opportunistic politicians. Vesak as a festival of light was a reassurance of ‘Apekema’ (the ‘SriLankanness’) dispelling the darkness of chaos and confusion. The starting point of such a rich experience is the inner serenity or stillness.

See that in the moment of noticing the silence around you, you are not thinking. You are aware, but not thinking. Eckhart Toll invites us to experience silence in a deeper sense. When you become aware of silence, immediately there is that state of inner still alertness. You are present. You have stepped out of thousands of years of collective human conditioning.

“If a man speaks or acts with an evil thought, pain follows him. If a man speaks or acts with a pure thought, happiness follows him, like a shadow that never leaves him.” This is what Buddha preached. In making it happen, one needs the inner stillness. In his bestselling book, ‘Stillness speaks’, Eckhart Toll goes on saying, “Look at a tree, a flower, a plant. Let your awareness rest upon it. How still they are, how deeply rooted in being. Allow nature to teach you stillness.”

“It is not what happens to you, but how you react to it that matters”, so said Epictetus (55-135), a Greek Philosopher. Inner stillness is essential to look at things in a focussed, unbiased manner. People around the world are finally waking up from the dark and starting to find deeper and more meaningful ways of life. Many people realise that a true happiness is when this world that is ‘within’ you is calm and serene. It doesn’t mean you are passive. It means you are present in the moment. It means that the little voice inside you can’t destroy you anymore; thus, you can finally live the life that you deserve to live. As Lao Tsu said, “activity conquers cold, but stillness conquers heat.” I wish the misguided youngsters who played havoc in Kuliyapitiya and other areas recently knew this reality.

By whatever name it may be called, and in spite of finer points with which they may be distinguishable, stillness is a practice which has significant similarities between Eastern Orthodoxy and the Buddhist tradition, says Ekhart Toll. There are differences too, but in spite of them, the similarities are strong enough to indicate the possibility that these two major streams of religion might have influenced each other during the course of our history. It also shows that different religions can have a lot of common territory, tapping which may end up making everyone wiser. It, in essence boils down to inter-dependence which is the reality of us as diverse Sri Lankans.

From serenity to synergy

The primary aspect in interdependence is synergy. Stephen Covey, in his bestseller ‘Seven habits of highly effective people’, describes synergy as follows: “Synergy means that the whole is greater than the sum of its parts. It shows that the relationship, which the parts have to each other, is a part in and of itself. It is not only a part, but also the most catalytic, the most empowering, the most unifying, and the most exciting part.”

“Synergy is everywhere in nature,” he goes on further. “If two plants are placed close together for growth, the roots improve the quality of the soil so that both plants will grow better than if they were separated. In short, one plus one equals three or more. The challenge is to apply the principles of creative co-operation, which we learn from nature, in our social interactions… The essence of synergy is to value differences – to respect them, to build on strengths, to compensate for weaknesses.” There is much food for thought indeed.

“Probably we never fully credit the interdependence of wild creatures, and their cognisance of the affairs of their own kind”, so said Mary Austin, a renowned American author. The way geese fly in ‘V’ shape and the way wolves run as a flock are just two prominent examples. We see more and more the absence of it in the political circles, especially in the Diyawannawa arena.

Synergy we see in nature is associated with the complex term symbiosis. It is close and often long-term interaction between two or more different biological species. In other words, a close prolonged association between two or more different organisms of different species that may benefit each member. Way back in 1877, Albert Bernhard Frank used the word symbiosis to describe the mutualistic relationship in lichens. It is also described as the living together of two dissimilar organisms, as in mutualism, commensalism, or parasitism.

The term, ‘symbiotic relationship’ is often used in the area of sociology. The word symbiosis has first been used to describe people living together in a community. It is, in fact, a true adaptation from the biological meaning of ‘living together of unlike organisms’.

In essence, the nature paves the way to show us the need for unity in diversity. As his eminence Malcolm Cardinal Ranjith said recently, if a garden has only coconut trees, there is no beauty. A garden is beautiful if it consists of trees, bushes and flowers of diverse sizes and shapes with flowers having multiple colours and fragrances. I believe, we Sri Lankans should be such a beautiful ‘human community’. That’s where the solidarity begins.

Much has been said about the need to have unity, citing the National Anthem that we need to act like children of one mother (Eka Mawakage Daru Kela Bavina). My point is that we had been making such utterance after every tragedy. I recall, the political leaders of different parties got together to symbolically light candles after the Tsunami tragedy. Flickering flames feebly faded away shattering the growing hopes of millions of Sri Lankans waiting for solidarity at the helm towards national prosperity.

I was watching in the television, the President, Prime Minister and the Leader of the Opposition lighting the candles at the holy mass held at Bishop’s Chapel seven days after the Easter Sunday tragedy. The continuing collaborative action with a common agenda towards betterment of mother Lanka, moving from words to deeds, is yet to be seen.

It is encouraging to see the loads of positive and promising messages in the social media, despite its temporary banning in Sri Lanka. Whilst a minority from all fronts attempts to propagate hatred and violence, prompt responses denouncing them and many follow up endorsements of such courageous standpoints is indeed encouraging. The real silver line in the dark cloud is this emergence of true ‘SriLankanness’ (Apekama) which, for me the pristine treasure of the precious sacrifice of hundreds of innocent lives lost in Katuwapitiya, Kocchikade, Batticaloa and Colombo. Despite the desperate attempt to ignite communalism by those with vested interests, the country at large remained peaceful in not repeating a ‘black July’ or ‘dark Digana’.

There is a timely need to ensure the solidarity of all, in our workplaces not just by mere utterances but through meaningful action. I participated in a session recently where a group of private sector professionals representing diverse identities got together in discussion on how to have ‘difficulty conversations’ with others, respecting the ‘otherness’ whilst maintaining ‘oneness’. I see this as a timely need where broken bridges have to be mended with restoring mutual trust. It is easier said than done, ye, somewhere someone has to begin.

Mother Sri Lanka is weeping. We need to show serenity, synergy and solidarity in our sincere thoughts and actions with ‘SriLankanness’ (Apekama) in mind. The revered Vesak Festival resonated the unity in diversity signalling a significant start. Irrespective of who we are or where we come from, what is needed is to understand what we need to do and how we need to do it for the upliftment of the nation in socio-economic and religio-cultural fronts. Professionals can pave the way with practical actions, in guiding others in the proper manner. What Martin Luther King said long ago makes a lot of sense here: “Scientific power has over-taken our spiritual power. We have guided missiles and misguided men”.