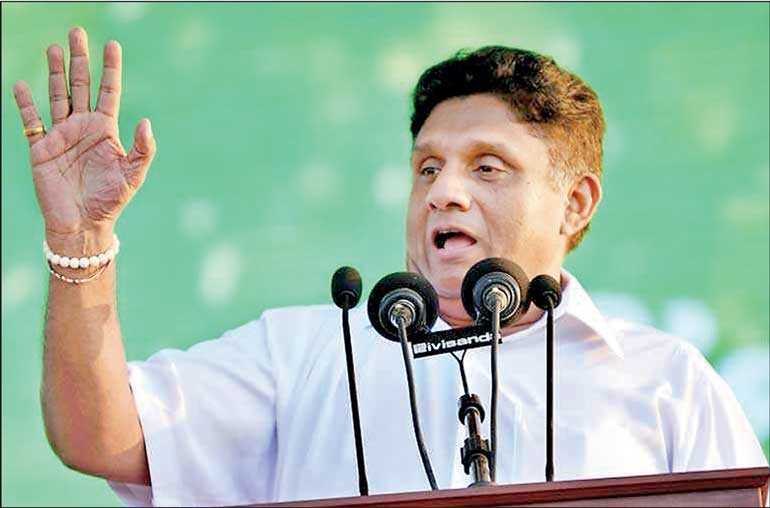 What happened on Wills Road in Badulla on 12 August was, if anything, plain attempted intimidation of the United National Party leadership by a prominent member of the party leadership itself – its Deputy Leader, Sajith

Premadasa; its Minister Harin Fernando and some others of lesser consequence like Lakshman Seneviratne.

The latter had been the famous ‘Seeni Amathi,’ or Minister in charge of sugar of the notorious Mahinda Rajapaksa Government. Lakshman is a characteristic political adventurer who has been changing sides as we do change pillows while sleeping. Sugar or coffee or baby diapers – he doesn’t mind.

I am told that Minister Eran Wickramaratne had been there. Eran had complained recently about the lack of democracy in the Grand Old Party. I hope he had read my salvo on the false idea that political parties cannot, by nature, have open democratic processes. If Eran had, in fact, been at Badulla, it maybe that he wanted to enjoy a breath of democracy!

What democracy was that? The idea that a presidential hopeful in a party must browbeat his way to force the hand of the party caucus to nominate him? This, while the Party Leader has stated already that the nomination issue will be decided after broader consultation. Does Sajith not want the leader to do that without deliberation? Does he have a ‘divine right,’ to be nominated sans democratic processes?

One thing Harin Fernando can do is organise crowds for meetings. As minister he has been a failure. He has not been able to rescue our cricket reputation; he simply accepted the ‘comfies’ handed over to him by the rich Cricket Board. He settled for perks and kept quiet. Our cricket has, thanks to Harin, sunk into depths it had never been before it acquired ICC status. Our boys were disqualified and had to pack up and return home.

Harin also became a laughing stock during the Easter massacre of innocents when he said his Papa had warned him in advance that something nasty is going to happen on that day and advised not to attend church. It was on everybody’s lips as to why he did not convey that warning to the police and to his leader, the Prime Minister. Papa’s boy looked after himself and forgot his responsibilities to the community. Harin now appears as Sajith, the party messiah’s, key backer. Is a prime minster role on the way for him – given Premadasa reaching his ambition?

Sri Lankan politicians are getting funnier and funnier by the day and they collectively constitute a vast and tragic comedy, sucking the blood of poor people. The poorer our people are kept, the more opportunities for politicians, while the more religious the poor people become in order to bear their growing deprivation.

This brings us to the point that our Government’s top priority should be to eliminate poverty as our once-lowly neighbours, Singapore and Malaysia, have done. In prosperous Western countries, which our politicians deride, it is not easy for politicians to deceive. The average voter here is self-confident and the education they have received make them prone to critical thinking. 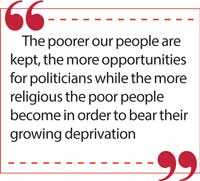 The very same is the difference between the media in the Western World and the media in poor lands like Sri Lanka. Our printed and TV media are garbage. Fortunately, social media is growing and growing. With more iPads given to students free and more freely available Wi-Fi, the situation is going to improve even better. On the other hand, we have President Sirisena who has banned Lanka E news.

Our hopeful Sajith seems more concerned with old style giveaways like free rice and Samurdhis. He is now planning to build 1,135 chaityas and has told some gullible Sangha members that he cannot wait until these Chaityas are completed. With whose money? Not his. Not Harin’s. Not Lakshman’s. Not Eran’s. Not Kili Maharajahs.

Our Deputy Leader seems absolutely low in economics. The latter is reported to have taken shelter in the London School of Economics. Mind you, where Harold Laski reigned and our own Dr. N.M. Perera got his double-doctor degrees. The Lanka E news joke is that our man only took shelter as during a temporary down-poor of rain (“wessata goda una”). If Sajith knew more economic policy he would not try to solve the housing problem via Government grants. He will not make a dent on our housing problem this way.

At Badulla, Sajith said he would reduce taxes for the middle class. He doesn’t seem to realise that the resultant shortfall will have to be met somehow. We don’t get money from the skies. Do we? His promise to develop Small and Medium Enterprises (SME) lacks details. That has always been the professed goal of successive governments including the current ones. Sajith should tell us more of his newfound wisdom here. In fact, the Prime Minister’s imaginative ‘Private Enterprise Sri Lanka,’ program is a bold attempt to help create SMEs.

Sajith also resonates with the old and derelict socialist lefties when he suggests class war, referring as he does to ‘Mahamandire innawun’ (those comfortably living in palatial buildings). That socialism is dead and its left-over espousers like D.E.W. Gunasekera and Vasudeva are sipping the pleasures of the cocktail circuits of the bourgeoisie parties lie the UPFA-now converted to Pohottuwa. These gentlemen and their forbears misled whole generations with their class war. The JVP has taken that philosophy over to its shelter.

In line with the old-style socialism that Sajith espouses as remedies, he has openly asserted that he disagrees with the market economics of supply and demand and liberal economics. This is strange for the 21st century. How could any economy run sans supply and demand?

The question I have is: will Sajith as new leader metamorphosise the UNP into an SLFP – especially now that the latter is all but dying and surviving on chemotherapy.

This is a serious issue for the Grand Old Party in its decision about nomination. The UNP must keep its core philosophy with it. We have observed how the revolution of economic liberalisation done under JR has boosted our economy.

With regard to Badulla, however, I believe that the UNP has an immediate concern about party discipline in its hands. If events like Badulla are permitted or ignored, that would be opening the door to a total dismemberment of that political party which has been the bulwark of Sri Lankan stability until now.

(The writer can be reached via sjturaus@optusnet.com.au.)