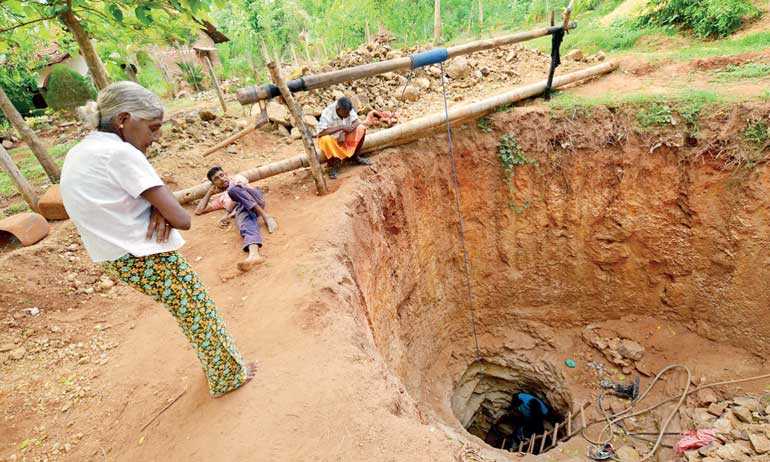 The demand for groundwater in Sri Lanka is steadily increasing, especially for urban and rural water supplies, irrigated agriculture, industries, aquaculture, small and medium enterprises and urban housing schemes. The rapid expansion of these projects is exerting much pressure on available groundwater resources

Unlike many of our regional neighbours, Sri Lanka is blessed with an abundant water table. However, many companies do not feel the full value of this precious resource due to the limited regulation and monitoring of fresh water extraction for business purposes.

Many factories and other facilities use both municipal and groundwater sources for their activities.  But due to the very low monetary cost to the company, the administration pays scant heed to the consumption, waste or misuse of water. This has led to the consideration of water by many as an unlimited natural resource, which they have a right to use (or misuse).

In addition, there is an increasing use of water inagriculture.

“As is happening elsewhere in Asia, farmers are increasingly turning to groundwater. Private investment in agro-wells and irrigation pumps is expanding rapidly because of the high rates of return on investment. Wells and pumps allow multiple-cropping of high-value upland crops, give farmers more discretion over water use, promote diversification of crops and livestock, and increase farmers’ incomes. Most of the new wells are running dry or producing low quality water due to site selection errors. However, indiscriminate withdrawal of groundwater from aquifers is a serious threat to the sustainable use of groundwater.” (Source: http://www.iwmi.cgiar.org/where-we-work/asia/south-asia-region/sri-lanka/key-water-issues/).

A drought in the Western Cape province of South Africa began in 2015, resulting in a severe water shortage in the region, most notably affecting the City of Cape Town and commercial agriculture. In early 2018, with dam levels predicted to decline to critically low levels by April, the city announced plans for "Day Zero", when if a particular lower limit of water storage was reached, the municipal water supply would largely be shut off, potentially making Cape Town the first major city to run out of water (‘Cape Town could be the first major city in the world to run out of water,’ USA Today).

For a few months in late 2017 and early 2018, it looked like Cape Town would run out of water. Due to the conservation efforts of Capetonians, ‘Day Zero’– thedoomsday moment when the city’s taps would run dry – wassuccessfully staved off, first to April 2018 and now for the foreseeable future. Yet with ever more severe climate change looming, the city of four million will face a reckoning sooner or later(Source: https://www.washingtonpost.com/news/theworldpost/wp/2018/07/10/cape-town/?noredirect=on&utm_term=.0acb5a7496b9).

Water shortages are becoming something of an annual ritual in Delhi, the world’s second most populous city. By 2030, it is estimated to grow by 11 million, from 14 million residents to 25 million - a megacity atop a megacity. In 2016, the Delhi Jal Board (the Hindi word ‘jal’ meanswater), which is responsible for the city’s drinking and wastewater management, estimated total distribution losses of around 40%. Many cities in both the developed and developing world have losses in the 4% to 20% range.

Anyone who has ever lived in or travelled to Delhi during monsoon season, between June and September, can testify to its water-clogged roads and overflowing sewers. How can a place with so much rain suffer from serious water scarcity? The answer is a basic one – mismanagementof resources. In the southern and southwestern districts of the city, which are particularly affected by both water shortages and flooding, harvesting rainwater holds particular potential.

In 1965, Singapore had water-management indicators similar to those of Delhi. Today, it reports that just 5% of its supply is unaccounted for, thanks to significant water reuse, desalination, stormwater storage and conservation efforts(Source: http://theconversation.com/new-delhi-is-running-out-of-water-80402).

Some of the key issues facing the country would be:

According to the Sri Lankan Water Resources Board, the demand for groundwater in Sri Lanka is steadily increasing, especially for urban and rural water supplies, irrigated agriculture, industries, aquaculture, small and medium enterprises and urban housing schemes. The rapid expansion of these projects is exerting much pressure on available groundwater resources.

The share of agricultural water demand is higher in Sri Lanka when compared to many other countries in the world, coming behind India by only 3%. The reasons for the increase in demand for water could be the low efficiency of water use in farms; poor adoption of water saving techniques; high losses associated with storage, distribution and on-farm utilisation of water; and the lack of incentives for conservation due to free State-supply of irrigation. In most developed countries, the adoption of technological advances and market-based strategies has reduced the water demand for farming.

Effluents from industrial and agricultural sources and from hospitals are considered water pollutants, therefore, comprehensive pollution control measures that go beyond mere disposal of wastewater are necessary to handle the problem of water pollution.

The surface water contamination is mainly due to improper disposal of sewage, unmanaged waste from industries, inadequate sanitary facilities, livestock and agricultural run-off. Over-utilisation, particularly through tube wells, is a major problem affecting ground water resources in Sri Lanka. Oil spills, dumping of waste from ships, coral and sand mining activities are the main causes of marine pollution in the country.

Except for the pipe-borne water supply, irrigation and hydropower schemes in general and other water resources in Sri Lanka are managed very poorly. Regulations are available to control most water related problems, but enforcement of these regulations is lacking.

The ultimate result of degradation and depletion of water resources is an increasing health hazard. Water-borne and vector-borne diseases are prevalent, particularly amongst urban low-income communities with poor sanitary facilities and drainage systems (http://www.ips.lk/talkingeconomics/2016/03/22/better-water-sustainable-agriculture-and-better-lives-for-sri-lanka/).

Given the current water landscape, our governments, enterprises and communities need to ask vital questionson how they extract, consume, optimise and recycle their fresh water. Only when leading corporates start addressing these issues will the rest of the country start taking note.

The writer is the CEO of Carbon Consulting Company.