Ranu Mondal: A story of using the social media aptly 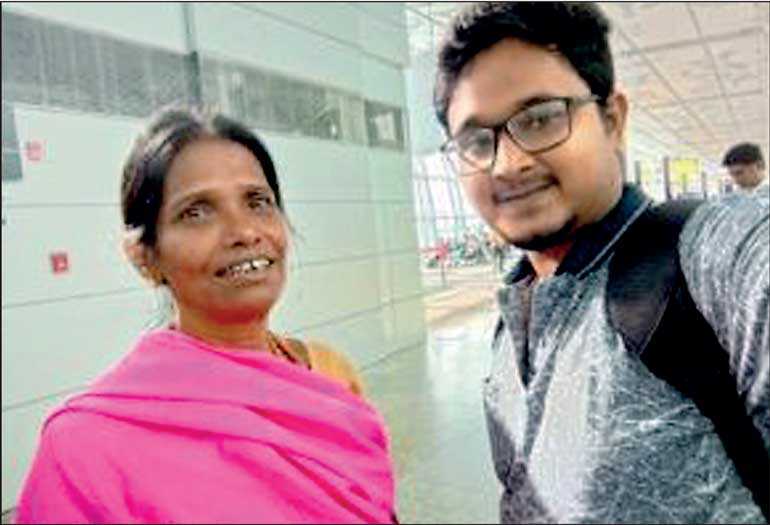 Social media brings us closer to those who are far away, but takes us far away from those who are close. This is a widely-discussed topic nowadays. There is a bitter truth in this.

Recently we heard story about a street singer called Ranu Mondal in India. She used to beg by singing at Ranaghat Junction. Atindra Chakraborty, a young passer-by at the station, recorded her singing a Lata Mangeshkar song.

These days most people are very busy posting about themselves on social media, may be their achievements. Some people, even when they go for dinner to a well-known restaurant, have a habit of uploading those details on Facebook. There is nothing wrong with that.  The beauty of the person called Atindra Chakraborty is that he uploaded Ranu Mondal’s singing video and now we all know it got popularised. Now she gets chances to sing for films as well, which is a dream of most singers.

Former Prime Minister S.W.R.D. Bandaranaike stated: “Man’s prime duty is to serve Mankind.” It is evident that in any society it has been accepted that to serve mankind is a good human quality. In order to serve mankind a person should have the virtue called ‘benevolence’. Virtue is a good habit. McCullough and Snyder (2000) mention that virtue has recently been defined as ‘any psychological process that enables a person to think and act so as to benefit him- or herself and society’.

Now we will have an idea about the virtue called benevolence. In simple terms, benevolent means ‘kind’. This is how the Pocket Oxford English Dictionary (2007) defines benevolence. According to Opatha (2010), benevolence is ‘kindness’ and ‘helpfulness’. Opatha and Teong (2014) mention several methods or ways of enhancing the virtue of benevolence. They are,

1. Understand the importance of benevolence. Then endeavour to be benevolent.

2. You can be helpful to miserable or depressed people by showing your sympathy, expressing your condolence, giving advice, providing learning materials, giving right information, giving money and providing physical resources. Be helpful in the way that is possible to you. If you do not have money, express your sympathy or give some useful information.

3. Be determined to refrain from killing humans and non-humans. Never even think about homicide or suicide.

4. Do not hurt others by using nasty and filthy words or vulgar language and by telling tales to make them quarrel.

Aristotle says: “Each man speaks and acts and lives in accordance with his character” (1127a27); the virtue of a man will be “the state of character which makes him good and makes him do his own work well” (1106a23).

The Opatha and Teong (2014) view is that it has generally been observed that a person with good character is able to:

2. Contribute to his/her own development

3. Help others to develop

4. Perform at any situation in an acceptable way

It is obvious that the person who recorded Ranu Mondal’s singing used social media properly. One who possesses a good personal character can use social media for his/her development and also other’s development

[Dr. Anuradha Iddagoda is a researcher and a lecturer. She holds a PhD from the University of Sri Jayewardenepura Sri Lanka, an MBA in Human Resource Management from the Postgraduate Institute of Management, University of Sri Jayewardenepura, a Master of Information Technology (MIT) post graduate degree, Bachelor of Information Technology (BIT) both from Charles Sturt University, Australia. Dr. Anuradha Iddagoda does research in Human Resources. Her current project is ‘Employee Engagement’. She has been a guest researcher at the Department of Sociology and Work Science in the University of Gothenburg Sweden.]

Sri Lanka’s sluggish export performance Sri Lanka’s merchandise exports have been limping from around 2011. Exports which amounted to $ 10.6 billion in 2011 have changed at a very slow rate since then. During 2011-18, the average annual merchandi

Crystal balls are murky things, and predicting what is ahead for the next decade is fraught with pitfalls. This is especially true in the aerospace industry as there is so little history to go on. As readers of this column are aware, the airline indu

The UNP is in decline not because it divided, but because its leadership is in a state of advanced deterioration and decay. The party has failed to replace or separate itself from the incubus of its hopelessly out of touch and durably unsuccessful Ol

We Sri Lankans, similar to those in other developing countries, prefer to leave a lot of things to the State. When something goes wrong we say “there ought to be a law” or “Government should take of these things”. However, climate change is a