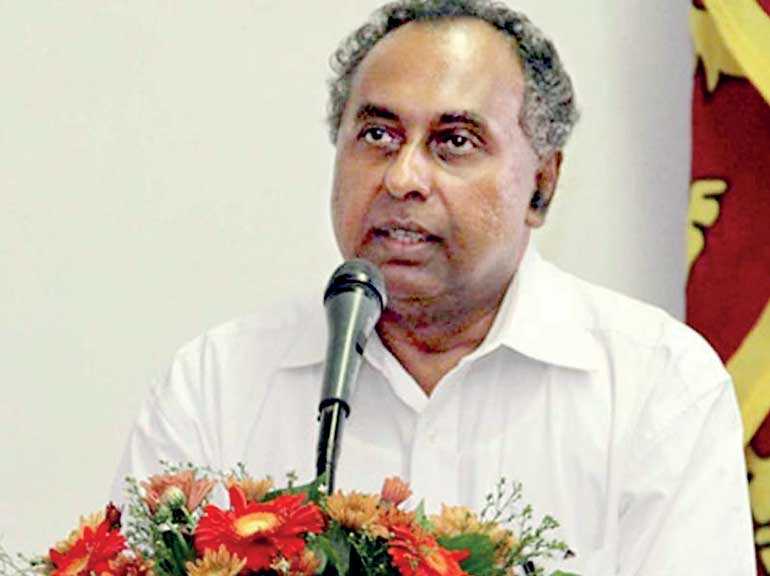 Professor Sarath Wijesooriya is a personage much to be admired although his recent outburst against the Yahapalanaya (YP) Government and its Prime Minister is clearly out of focus.

I was in Sri Lanka during the 2015 landmark elections and I keenly watched the media and even observed at public meetings. Professor Sarath Wijesooriya (SW) deeply impressed me with his lucidity of mind and the utter clarity of his rhetoric and Sinhala expression.

The bulk of academics in Sri Lanka have been acting as bystanders while a nationally vital political discourse has been going on. Yet, academics like Dr. Gamini Viyangoda and Professor SW took the lead in a widely desired civilian participation.

The centre of the civil Yahapalanaya movement had been Revd. Maduluwawe Sobitha to whom the country is indebted. These two academics assisted the monk. Praise be to Professor Sarath! It is a pity, therefore, that Prof. SW has had to publicise sweeping and simplistic negative assessments of what the YP government has achieved so far.

Over a number of occasions recently Prof. SW has scathingly attacked the President and the Prime Minister for having ‘totally betrayed the promised revolution’. One can understand his picking on the President since the latter has turned his back on the goal of Yahapalanaya and has been, not once, twice but numerous times, acting to sabotage the Government he helped to create in 2015. If we are to mention one major factor that unexpectedly hampered the progress of the YP program it is, surely, the President’s treacherous political U-turn.

On the other hand, even the President cannot be wholly condemned since for the first four years he did cooperate with the UNF Government headed by Ranil Wickremesinghe. The major task of the abolition of the Executive Presidency could not be done due to the lack of parliamentary numbers. However, the 19th Amendment to the Constitution was effected as a practical compromise with President Sirisena’s active involvement in getting the numbers to vote for it. President Sirisena now regrets he did that but his reasons are generated by a selfish desire to continue to be a powerful President.

Sirisena now states the 19 Amendment is “a curse”. It certainly was a curse when he pushed at loggerheads against the essential idea of parliamentary supremacy that underlies that amendment. Parliament’s newly-won power frustrated Sirisena’s futile and crazy attempt to dismiss the Prime Minister and dissolve parliament. Along with his illegally-installed Prime Minister, Opposition Leader Mahinda Rajapaksa, the President ran a fake government to the consternation of the serious ones and to the hearty laughs by those who had a sense of humour.

The setting up of the Constitutional Council to make appointments to heads of key institutions that relate to law and order was a major YP achievement that our Professor ignores. The pathway is now clear for an impartial judiciary, an interference-free Police force and Elections office. Composed of eminent independent citizens in addition to the bilateral political elements (the Prime Minister and Leader of the Opposition) this council plays a decisive role in the appointments concerned.

Under the previous regimes this had not been so. The Judiciary was, in reality, subservient to the President. This change had been a huge shift in the rules of the game that turned our administration irrevocably toward the Yahapalanaya goal. The country saw what happened under former CJ Mohan Peiris and what happened to former Chief Justice Shirani Bandaranaike. Such things can no longer be happen. When the courts are free, the ordinary individual is free. There are a number of imperfections in the police force but here, too, one can observe that cops are acting with distinctly less fear of political reprisal.

The Freedom of Information Act has been passed thus giving any individual citizen the legal right to demand information from Government officials with regard to matters that affect their rights. This accords with the public need for transparency. It will take time for most persons to utilise this, but that is coming.

People walk a lot these days with freedom of fear of a hit squad coming in the dead of night. So many murders and disappearances of dissenters were reported under the previous regime. That isn’t happening now. People are not shot at while in protest (Rathupaswala). Not a single case of state terror has been reported during the years of this G

The major shift toward Yahapalanaya needs the new Constitution

Professor SW’s desire for the completion of the YP revolution essentially needs the installation of a new constitution. This is something he must understand. The draft is more or less ready but it has been frozen due to opposition from the legislators of the other side.

This is another instance where deficiency in parliamentary numbers have thwarted Yahapalanaya. The draft does away completely with the institution of the Executive Presidency and the full restoration of parliamentary supremacy, which is the central goal of Yahapalanaya. The draft also brings in changes to the way MPs are elected in order to ensure better quality legislators. There are other salutary changes mooted. But we have an Opposition that doesn’t know the need for bilateral action in the wake of common national needs.

Acting within a political medium

Our Professor has to realise one key factor and that is that the YP program can be carried out only through politicians in power. Fundamentally, the Prime Minister and his ministers are in politics and they must of necessity act within a volatile and imperfect political environment.

I illustrate this anomaly by referring to Prof. SW’s criticism of the government enhancing of Samurdhi. The other day, the Professor said that the Prime Minister should be ashamed of boasting about the Government’s increase of Samurdhi recipients because that implies the increase of poverty in the country. The Professor is dead right. On the other hand, he has to understand that this is a scoring point in the electorate and that without winning the electorate nothing can be done.

Our Professor would have made a more realistic assessment if he gave some thought to the Government’s positive thrust in the economy. The ‘Gamperaliya’ and the ‘Enterprise Sri Lanka’ projects are well-thought-out ones with high yielding capacity.

The boost to tourism and to foreign exports (highest on record in 2018) have been largely attributed to the Government’s friendly win-over of the Western countries which buy most of our exports. The winning of GSP Plus rights and the removal of the ban on our fisheries exports are other illustrations.

Professor Sarath Wijesooriya is, therefore, advised not to go on haranguing the Government and its Prime Minister unfairly and unconstructively because the net result of such efforts by respected critics like him would be to help the former regime back. He will then have to see a repeat of the sordid performances of that crew. What is worse, the Professor would have to shut his mouth forever.