Sri Lanka’s eighth Presidential Election held on Saturday has produced an outcome that has surprised the winners, the losers as well as the observers. The most obvious, and arguably disquieting, and utterly unanticipated trend that became immediately visible is the re-sharpening of majority-minority divide in the citizens’ electoral choices across the country.

Gotabaya Rajapaksa, the winner, has received overwhelming backing of the voters of the majority Sinhalese Buddhist community. Yet he has been almost totally rejected by the minority Tamil and Muslim voters who are regionally concentrated in Sri Lanka’s Northern and Eastern Provinces and the Central Province’s plantation country and some urban areas of the Western and Southern Provinces.

Sajith Premadasa, Rajapaksa’s main challenger, received support of a vast majority of Tamil and Muslim voters. Yet he has been soundly rejected by the Sinhalese voters, in some electorates receiving only one-third of the votes.

The final percentages of vote share obtained by the two main candidates – 52.55 by Rajapaksa and 41.99 by Premadasa – show that the new Present has received a clear mandate that has also rocked his opponent’s political coalition, New Democratic Front. The winner’s majority exceeds 1.36 million votes, which is quite high in Sri Lankan standards.

The vote distribution between the two main candidates shows that the presidential election has re-affirmed the continuity, and not the weakening, of ethnic polarisation in shaping the political destinies of Sri Lankan society. This is a factor that the new President and his Government should not fail to address in a manner that will heal the wounds of the past.

The outcome is also a severe blow to candidates who sought to emerge to form a ‘third force’, with the hope of breaking the monopoly of country’s two main political coalitions in the near future. These ‘alternative’ candidates could not secure even four percent of the total votes.

There is one major reason that seems to have contributed to this polarizing electoral outcome. It is the political impact of the series of bomb attacks carried out by Islamist terrorists on 21 April, the Easter Sunday, this year. Its far-reaching consequences run parallel to the way in which 9/11 terrorist attacks on the US changed beyond recognition the contemporary politics of America and Western Europe.

The suicide blasts took place in Colombo, Negombo and Batticaloa and killed hundreds of worshippers and other civilians and sent shock waves throughout the country at a time when people had been learning to cope with the trauma of a three-decades of civil war between the State and Tamil insurgents. The attacks and the massive devastation they caused also exposed the utter failure of the government leadership as well as the defence establishment to prevent them, despite prior warnings.

The political impact of Easter explosions was multiple. It created a deep sense of insecurity among the citizens along with a huge loss of faith in the capacity of the Government and its leadership to provide citizens security and safety. Amidst public outrage, the Government immediately began to face an unprecedented crisis of public confidence.

It also set in motion a new wave of Islamophobia, spearheaded by the social media, and it spread rapidly, particularly among the Sinhalese-Buddhist citizens. 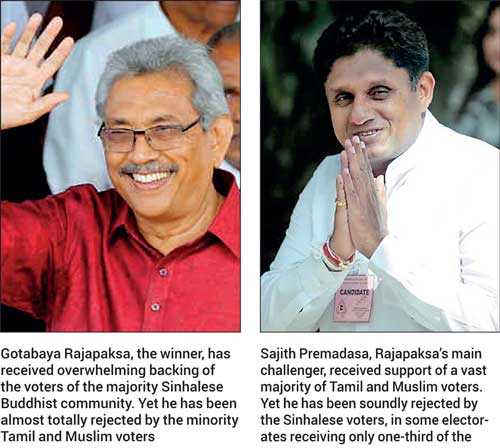 This new phase of Sinhalese nationalism gave rise to a fresh political consensus as well. Its core thesis was that the ‘weak and ineffective’ government should be replaced with ‘a strong government’ headed by ‘a strong leader’ with capacity and resolve to protect the citizens from a new generation of terrorists, with international connections and modern technological capabilities.

By this time, Gotabaya Rajapaksa, Sri Lanka’s former Defence Secretary who was in charge of the war against the LTTE, had already begun his campaign to be a candidate for the forthcoming presidential election. He and the party led by his two brothers, Sri Lanka People’s Party (Sri Lanka Podu Jana Party – SLPP), had also developed a political campaign focusing primarily on the promise of establishing a national security regime led by a strong leader free from the shackles of liberal democracy. That was the alternative they offered to replace the deeply divided, inept and crisis-ridden Government jointly headed by President Maithripala Sirisena and Prime Minister Wickremesinghe.

Thus, the sudden crisis caused by the Easter Sunday terrorist attacks provided a new context for a choice between a weak democratic regime and a strong national security regime.

How did the Sinhalese, Tamil and Muslim societies respond to the two opposing political alternatives presented by the two principal candidates?

Sajith Premadasa is the candidate of the New Democratic Front, which was a broad coalition formed a few weeks before the election. Its key partner is United National Party, headed by Prime Minister Ranil Wickremasinghe. It is also a multi-ethnic coalition supported by the main Tamil and Muslim parties.

Premadasa, Deputy Leader of the UNP, was given party candidacy only in late September, due to internal party differences between two factions led by him and Wickremesinghe. Having entered the fray rather late, Premadasa developed a welfare state narrative that countered his own Government’s neo-liberal economic and social reform policy agenda as well as his opponent’s – Gotabaya Rajapaksa’s – national security narrative. During the election campaign, Premadasa also projected his image as the presidential candidate of the poor and marginalised.

Election results indicate that Premadasa’s central promise of bringing the welfare state back, with an ideology of paternalistic populism, failed to make any significant impact on the Sinhalese-Buddhist electorate. The fact that he was the candidate of a ruling party that had lost public trust and the resultant anti-incumbency disadvantage has obviously added to his woes.

In the deep south, Premadasa’s election campaign may have refreshed among many Sinhalese families those horrific memories of violence associated with the Government headed by his own father during the late 1980s.

However, the most important reason why he was rejected by the Sinhalese section of the electorate by a substantial margin is the perception that he was not nationalist enough to be Sri Lanka’s President in the post-Easter Sunday context.

It is also Premadasa’s weak Sinhalese nationalist credentials that ensured him overwhelming support – in many electorates over 80% of the valid votes – among Tamil and Muslim voters.

The Tamil and Muslim citizens seem to have had an insecurity problem different from their Sinhalese counterparts. The source of this minority insecurity is the political elite of the Sinhalese nationalist coalition led by the Rajapaksa family. The latter’s past track record, from the point of view of the minority communities, has had a distinctly Sinhalese-nationalist orientation.

Rajapaksa’s campaign strategists were also keen to prove the point that they could win a presidential election without the support of ethnic minority voters. They seem to have been inspired by the electoral strategy of benefitting from deep ethnic divisions and the majority’s security anxieties, as successfully practiced by India’s Bharatiya Janatha Party.

Gotabaya Rajapaksa’s developmental agenda for Tamil and Muslim-majority provinces could hardly resolve the insecurity dilemma of the ethnic minorities. Thus, in the districts where the Tamil and Muslim communities are dominant numerically, Sajith Premadasa has polled more than one million votes over Gotabaya Rajapaksa. They have contributed to Premadasa’s national total as well as the national average quite significantly. In many electorates in the north and east, Rajapaksa’s share of votes is as low as 20%.

Meanwhile, if the 9/11 altered the politics of Western democracies in a trajectory away from liberal democracy, multiculturalism, and political pluralism, and fostered deep insecurities among the majority ethnic communities, a similar process of change has been taking place in South Asia too.  It also fuelled new tensions among ethnic communities in multi-ethnic societies.

Sri Lanka proved an exception in 2015, but in 2019, it has clearly joined the global trend. The dismal failure of Sri Lanka’s democratic reform experiment of 2015 too has provided the context for a shift in the popular support for a possible retreat from traditional forms of democracy.

Meanwhile, the pressures of big electoral victories are such that the new president and his family members, who will constitute the core of the new regime, might find it difficult to resist the temptation of giving into the wishes of their Sinhalese nationalist constituency. This is particularly so in view of the ethnic polarization of the electoral verdict.

However, to fulfil his promise of taking the country out of its present state of deep economic and governance crisis and stagnation as well as ushering in an era of economic prosperity and political stability, Sri Lanka’s new President will need to re-build the trust between the majority and minority communities.

Thus, the outcome of the Presidential Election highlights once again how inter-ethnic reconciliation continues to be centrally relevant to any recovery and reform agenda for post-war Sri Lanka.

Reconciliation is needed for healing, and not aggravating, the wounds in a country that is struggling to come out from a recent past of conflict, violence and democratic setbacks.