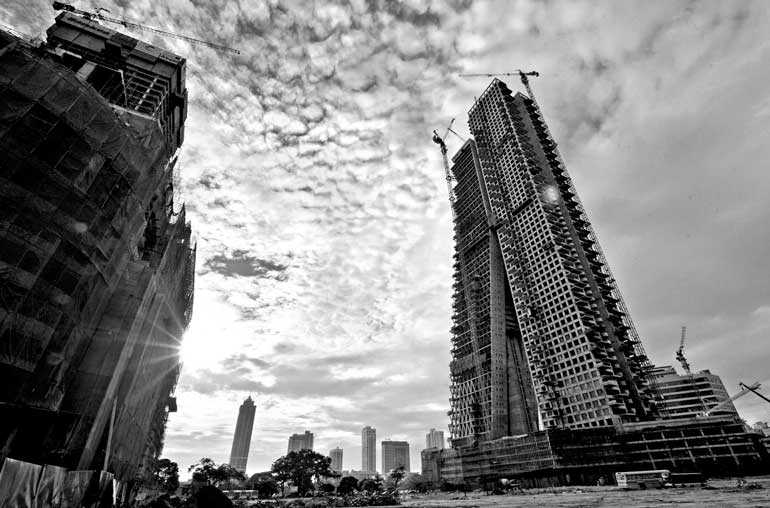 Government policies with respect to private properties, having an independent judiciary and arbitration system will encourage not only FDIs but also local entrepreneurs to invest with a higher degree of confidence. When corruption levels are high, it will make the business environment gloomy for investors. Further, corruption will make public procurement inefficient whilst badly affecting corporate investments – Pic by Shehan Gunasekara

Every nation, every community and each individual is facing the social and political impact along with the impact of violence. Interpersonal violence results in medical, policing and judicial costs immediately after the violent incident occurs and it has longer term implications for productivity and economic activity.

Providng a matrix for measuring peace and understanding the relationships between business, peace and prosperity is becoming ever more important in societies today. One of the key publications refered in the article, ‘The Business and Peace Report,’ is published by Institute of Economics and Peace.

The economic performance of a country and the prevailing peace are meticulously interlinked. Peace is a forecaster of performance of any economy, indicating level of attracting Forging Direct Investments and many other macro level indicators.

In business analysis any investor will consider the benefit of peace as a key factor for their decisions. There are two key indicators studying peace aspects and its relationship with economy namely, Global Peace Index (GPI) measuring absence of violence in an economy and Positive Peace Index (PPI) measuring attitudes and structures in a society that will sustain peace.

The Positive Peace Index, higher rankers experience 2% higher GDP growth compared to lower PPI rankers. These studies generally are not focused on US and EU where economies are much stronger. Further World Bank through their studies have confirmed that there is a tendency to get 8% higher returns on Investment compared with countries having lower level peace.

It is well established opinion that peace is essential for business performance and private sector led economic growth. Violence resulting of armed conflicts or crimes imposing an additional cost on any business taking place in an economy. Higher level of peace will ensure improved functionality of markets, increased competitiveness and better institutions.

Better performance of an economy may positively influence in reducing violence and poor performance of an economy may bring in disturbance to peace. These two aspects therefore which could be considered as strongly interlinked, which may take a destructive direction in a negative environment and it will lead to an extremely constructive situation with positive impact having a correlation on each other.

There are several pillars interconnecting each other which affect peace and business, namely; Well-Functioning Government, Sound Business Environment, Free Flow of Information, Low Levels of Corruption, Equitable Distribution of Resources, High Levels of Human Acceptance of the Rights of Others and Good Relations with Neighbours.

Government policies with respect to private properties, having an independent judiciary and arbitration system will encourage not only FDIs but also local entrepreneurs to invest with a higher degree of confidence. When corruption levels are high, it will make the business environment gloomy for investors. Further, corruption will make public procurement inefficient whilst badly affecting corporate investments.

In business analysis any investor will consider the benefit of peace as a key factor for their decisions. There are two key indicators studying peace aspects and its relationship with economy namely, Global Peace Index (GPI) measuring absence of violence in an economy and Positive Peace Index (PPI) measuring attitudes and structures in a society that will sustain peace. The countries which had a lower level of fear of violence in the last 60 years have managed to reach three times higher GDP compared with countries which had a high level of fear of violence. Further, the comparative and positive growth signs were visible with lower level of inflation, easier access to finance and higher level of FDI attraction

The ability of the businesses to adhere to government regulatory requirements which includes efficient customs processes, access to finance and capital through formal banking systems and other aspects specified by ease of doing business index will lead the society to a peaceful atmosphere.

Free flow of information is vital for proper functioning of businesses and also general public to have confidence in performing day today activities in life. From the point of view of business, greater availability of information helps market integration, commercial collaborations and innovations encouraging new entrants. Studies have confirmed that the countries with higher free flow of information have a lower level of tariff rates, the reason being the government will have considerable pressure from the markets with similar comparative information being available.

It is a top level requirement for any economy to have a healthy and educated working population and it is a deciding factor for business operations for their productivity and profitability. There is a tendency that skilled workers may migrate to other geographical markets if the domestic conditions are vulnerable.

Acceptance of the rights of others

Acceptance of rights of others will ensure greater participation of all communities not only in economic and business activities but also in social and cultural activities within the society. This situation will make a greater stock of human resources available for businesses to function effectively.

The relations between states, different ethnic and cultural groups are considered under this aspect. It will ensure a higher level of trade and lower tariffs between economies which will lead to economic growth. The trust and confidence built in each other will drive economies to greater heights.

Instability of prices would negatively have an impact on savings, consumption and investment. Price volatility will create more risks, reduce profitability and productivity at large. The situation will push authorities to take measures to change monitory policies with higher interest rates which in turn will make it difficult to invest and even for consumption.

Low and predictable prices and inflation would bring confidence and a comfortable situation for investors. It is a known fact that low performing economies are having a lower return on investments compared to high performing economies. Long term median inflation prevailing in high peace countries amounts to 3.5% and the same figure in low peace countries, recorded as 9.7%.

FDIs are not only bringing in required finances for the economy, but also the technology, managerial exposure and job creation. Further the FDIs pave the way to be integrated with global trade flows as well. Due to these facts attracting FDIs will play a key role in the growth trajectory of developing countries. If the situation is less peaceful, the investor attraction would also be low and weak.  The most peaceful countries including China have received in the recent years on average, 2% of GDP as the FDIs.

Entrepreneurial skills and finances are considered to be most critical inputs for a business venture. Not only at the inception but even with business expansions it plays a vital part. Peaceful countries are well equipped with financial markets inclusive of capital markets and stock exchanges that could cater to such business necessities.

It is vital for low peace countries to face the situation with proven and high standardised accounting and auditing structures, sound credit reporting systems, collateral and insolvency regimes with well-functioning payment and settlement mechanisms.

It is extremely difficult determining the level of impact and the correlation of the above mentioned eight pillars with each of the other pillars. For example a well-functioning government may lead to free flow of information where free flow of information may lead better function of media institutions. This situation may lead to lower level of corruption which in turn would support the authorities to function better and transparently.  Having a sound business environment would have a positive impact on business transactions where members of the society will be able to solve conflicts in a legal way and within a shortest possible duration as enumerated in doing business index compiled by the World Bank.

A sound and positive business environment may also create the path to lower unemployment which will have a positive impact on peace which may lead to lower corruption and better governance. It may also work as a vicious cycle in a negative atmosphere where more unemployment will pave the way for unrest in the society.

Entrepreneurship is identified as the key factor of the economic growth that has immensely contributed to developed economies reaching their economic goals. The reports reveal that for last six decades, GDP growth had been three times higher in highly peaceful countries and over the last decade GDP per capita had been seven times higher when compared with countries with deteriorated peace levels.

Further Foreign Direct Investment inflows are more than two times higher in countries with higher levels of peace ensuring the continued growth of such economies.

Economic stagnation is a common look in low peace countries where annual growth of GDP per capita is remaining at very low levels. These countries are in turn more vulnerable with political instability and polarisation, rising unemployment and poverty, economic volatility and inflation. These disorders would form a cyclical effect and will continue to deteriorate the situation further.

(The contents of the article does not constitute any opinions of the institution/employer that the writer is connected to.)