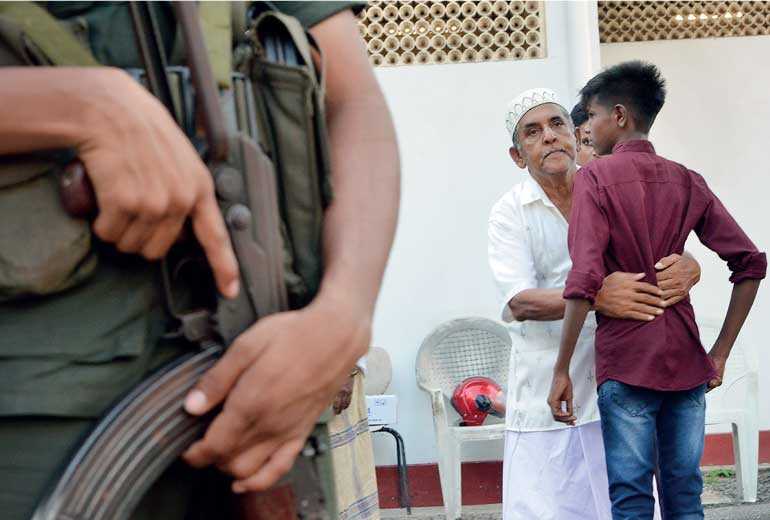 Muslim political parties have not only disunited the community, but also, at least in the eyes of the Buddhist majority, act as a fifth column to Arab regimes. Some thoughtless and stupid actions of one or two leaders have thrown doubts in the public mind whether the Muslims are actually a community in or of Sri Lanka – Pic by Shehan Gunasekara

When the 15-member caretaker cabinet was announced soon after President Nandasena Gotabaya Rajapaksa assumed office, the Muslim community must have noted that it was the first time since cabinet government was introduced in this country in 1947 that a Muslim name was absent from the list of ministers.

Although it is not a constitutional requirement that every cabinet should reflect the pluralist makeup of the society, it became almost an unwritten conventional norm for Prime Ministers to reflect that reality in their respective cabinets.

For instance, there was absolutely no need for the Sirimavo Government of 1970s to seek support from the Tamils. Yet, and apparently on the advice of a Muslim minister, she brought in through the back door a Tamil, Chellia Kumarasooriyar, into the cabinet to maintain that plurality. That conventional wisdom was broken for the first time by the new President.

What made the President to do this? Ali Sabri, one of the President’s confidants and Attorney, requested his community not to paint the President’s action with a communal brush, and he promised that Muslims would be made happy within a period of six months. Be that as it may, the real reason for the ministerial miss should be sought not in the President’s prerogative per se but in the pathetic plight of Muslim politics itself.

The unpatriotic behavioural arrogance and misappropriation of powers by certain Muslim ministers and Governors under Yahapalanaya for example, became so atrociously public that they provoked almost an island-wide anti-Muslim paranoia amongst members of other communities, and led Buddhist priests to call for the dismissal of those personalities.

Rev. Athuraliye’s Rathana Thera went on a hunger strike in front of the Maligawa specifically with that request. That drama and the subsequent resignation en masse of all Muslim ministers, their deputies and governors, and their shameless resumption of duties on the pretext that they were requested to do so by the Mahanayakes are all now archival.

Given this shameful political background, no president, even if he were to be a Muslim, would have dared to include a Muslim in his handpicked cabinet. The question to be asked and answered therefore, is, how did the Muslim community arrive at this sorry state of affairs?

In several previous contributions to Daily FT, I addressed the issue of Muslim leadership and called for the dissolution of Muslim political parties, such as SLMC and ACMC. While the leadership (both secular and religious) lacks long-term vision and political sagacity on the one hand, and remains incorrigibly selfish, corrupt and nepotistic on the other, Muslim political parties have become breeding grounds for imported religious ideologies and domestic factional frictions.

These parties have not only disunited the community, but also, at least in the eyes of the Buddhist majority, act as a fifth column to Arab regimes. Some thoughtless and stupid actions of one or two leaders have thrown doubts in the public mind whether the Muslims are actually a community in or of Sri Lanka. This is unfortunate.

For centuries, Muslims lived in Sri Lanka as a thoroughly integrated community and without any open hostility towards the Sinhalese and Tamils. Can any historian point out an incident of Sinhalese-Muslim open riot before 2015, and Tamil-Muslim open riot until LTTE came into the scene in 1980s? There might have been some sporadic fracas in certain localities, but they were put down no sooner than started primarily through the interference of local leaders from the affected sides.

Unlike members of the other two communities, a large percentage of Muslims are bilingual, quite many are trilingual and a few even quadrilingual with some fluency in Arabic or Malay. In addition to this communicative advantage, being a community of mainly traders and pedlars until very recently, and settled in almost every province and district of the country, Muslims have a unique and deep understanding of the culture and lifestyle of the other two communities.

These are invaluable social assets for a Muslim leadership that could utilise them and lead the community as peace makers, especially at a time when there is such a widening social and communication gap between fellow communities.

Such a role was played by previous Muslim leaders by aligning themselves with the national parties. Instead, by creating independent Muslim parties, their leaders not only enriched themselves and their cronies at the expense of the community, but dangerously added to an already boiling cauldron of ethno-nationalism.

Muslims, because of this leadership, have become a political outcast at the moment. Instead of standing on a proud pedestal of dedicated service to the nation and country and demanding justice and fair play, a dishonest and disloyal leadership is now forced to beg for mercy and special favours. What a pathetic state of affairs!

It is time the community wakes up, understands the gravity of the situation and starts working to create a fresh but patriotic, youthful and visionary leadership, which is prepared to join hands with a new generation of Sinhalese and Tamil political activists who are aspiring to build a united, democratic and prosperous Sri Lanka.

President Gotabaya Rajapaksa has promised a lot and is currently delivering on the easier part of his promise package. However, the gloomy state of the domestic economy with an equally gloomy economic environment globally is going to make it harder for him to translate his entire package into action.

The neoliberal economic paradise is increasingly becoming a mirage for the vast majority all over the world, including Sri Lanka. Yet, the Gota-mania that is sweeping through the Buddhist Sinhala sector may help the Rajapaksa juggernaut to roll over the next General Election, and win the right to govern. As things become more difficult, that Government would require a strong and effective opposition to keep it clean and accountable to the people who would bestow that right.

The Muslim community has changed a lot, amidst all recent setbacks, in the sense that it now possesses a critical mass of intelligentsia and a growing class of professionals, who can think and act rationally and in the broader interest of the nation first and community second without, being bound by strings of religious orthodoxy and moneyed powers.

Happily, this intelligentsia and professional class also include among them Muslim women, a component that did not exist in the past. It is this gender mixed group that has to wipe out the past shame and work hard to produce a new leadership. This is the challenge of the century.